How To Sex Your Boner-Killer Hag Of A Wife: A Christian Wonksplainer 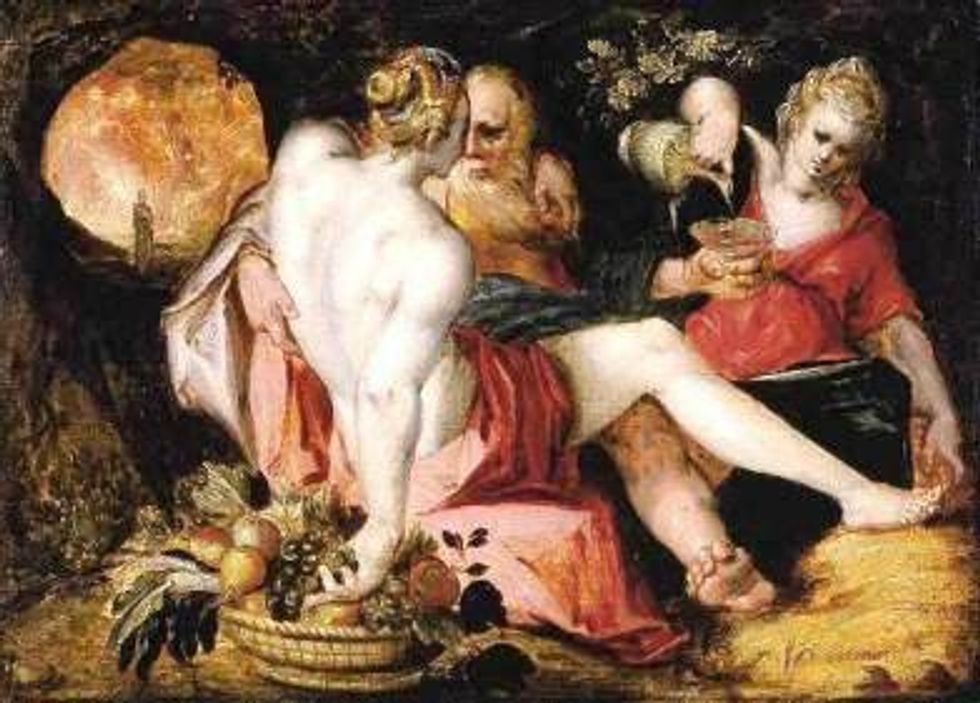 If this was REAL Bible sex advice, it would be about how Lot's daughters drugged and sexed their dad.

Hey, fundamentalist Christian Wonkers, how are you doing? Do you exist? If so, TODAY IS YOUR LUCKY DAY. Instead of writing liberal godlessness at you, we have a nice story about what to do when your Christian wife is being a REAL PILL about letting you jam your superior Christian man dick up inside her, for whatever "reasons" she has today.

Didn't sleep last night because she was up with the sick baby? Whatever, lady, it's time for bone zone. In the hospital with cancer? Put a "do not disturb" sign on the chemo drip, because Daddy's got an erection! Anyway, the point is sometimes a Christian husband is simply trying to fulfill his God-ordained destiny to fuck his wife whenever he wants, and his wife is not very helpful.

Thank baby Jesus for this website, Biblical Gender Roles, which teaches us how to turn sex lemons into sex lemonade, even when your wife doesn't particularly appreciate you sex-fucking her at that particular moment. Does she have a mush-mouth Crabby Carol look on her face? Well, don't look at that old thing, look at her tits! Let author Larry Solomon 'splain:

I know you love your wife, most of us as men love our wives. You want to connect with her physically AND emotionally during sex. But your wife is the one refusing to connect with you emotionally, so you have to concentrate 100% on the physical side.

See, SHE is the problem. We guess, according to this philosophy, the next natural step would be to simply turn her around and let her make assfaces at the headboard, except we're not 100 percent sure doggie-style is allowed in Bible sex.

Let Larry try and 'splain this in another way:

Let me try and explain this in another way. In Greek mythology there was a monster woman named Medusa. She was a cursed and hideous creature and if men looked upon her face they were turned to stone. [...]

Your beautiful bride’s face becomes ugly during this sinful time that she is grudgingly giving you sex as she grimaces wanting you to “just hurry up and get it over with”.

So like the men who could not look at Medusa’s face otherwise they would be killed, realize that if you look on your wife’s face when she is displaying a sinful attitude toward sex it will kill your sexual pleasure and may actually make it much more difficult for you to achieve the physical connection and release that you need.

Never mentioned in this: whacking your one-eyed Jesus monster if she's really not in the mood and maybe waiting until next time? No, clearly your beautiful bride is a monster lady right now, and just like Medusa turned men to stone, your wife will turn your boner to Not Stone if you keep making eye contact.

Now, lest you lady fundamentalist Christian Wonkers out there are thinking, "Well, sometimes I have a legitimate excuse to lock the gates of the lady garden," don't worry, Larry understands. He says if she's legit sick, she's not obligated to follow God's 11th commandment, "Spread 'Em Like You Like It." Also, too:

There are other reasons of course that a woman might legitimately ask for a rain-check of course like after the birth of a child, or surgeries, chronic pain flare-ups, deaths in the family and other reasons like these.

See? If you're having surgery at the time, or maybe your kid just died, you can call in sick to getting grudge-fucked by your godly husband.

RawStory points out that this dude has previously written that marital rape doesn't exist, which is a HUGE shocker. It's also not a new idea in fundamentalist circles. Christian right matriarch Phyllis Schlafly has famously advocated this idea. While she is free to yap her mouth-lips about what other ladies are and are not allowed to do, we assume her dusty vag is under the sole proprietorship of her husband, unless it's not, in which case she's a huge hypocrite.

Anyway, we have been saying a joke this whole time, we are NOT writing a sex note to fundamentalist Christian Wonkers, because those do not, science fact, exist. As you all know, we think these sorts of people are REAL FUCKIN' GROSS. And granted, there are lessons out there for ALL couples (including the man-sex and the lesbo-scissors kind) about how there are times you need to, for the good of your partner, throw your legs in the air like you just don't care, even if you really just want to watch "Law & Order."

It's all part of Wonk pal Dan Savage's "GGG" philosophy of being "good, giving and game" with your sex partners. And maybe Larry Solomon's advice would sound better if he had companion articles about how "Honey, I had a hard day at work being the male Christian provider" is NOT always a good excuse for husbands to say no when their wives want to tie them to the bedposts and peg them like it's Christmas morning and all of Santa's presents are buttsex.

But he doesn't, because fundamentalist Christians are gross and misogynistic and fuck them, also, too.