Huge Scandal Keeping Mitch Daniels Out of the 2012 Race: He's a Good Dad 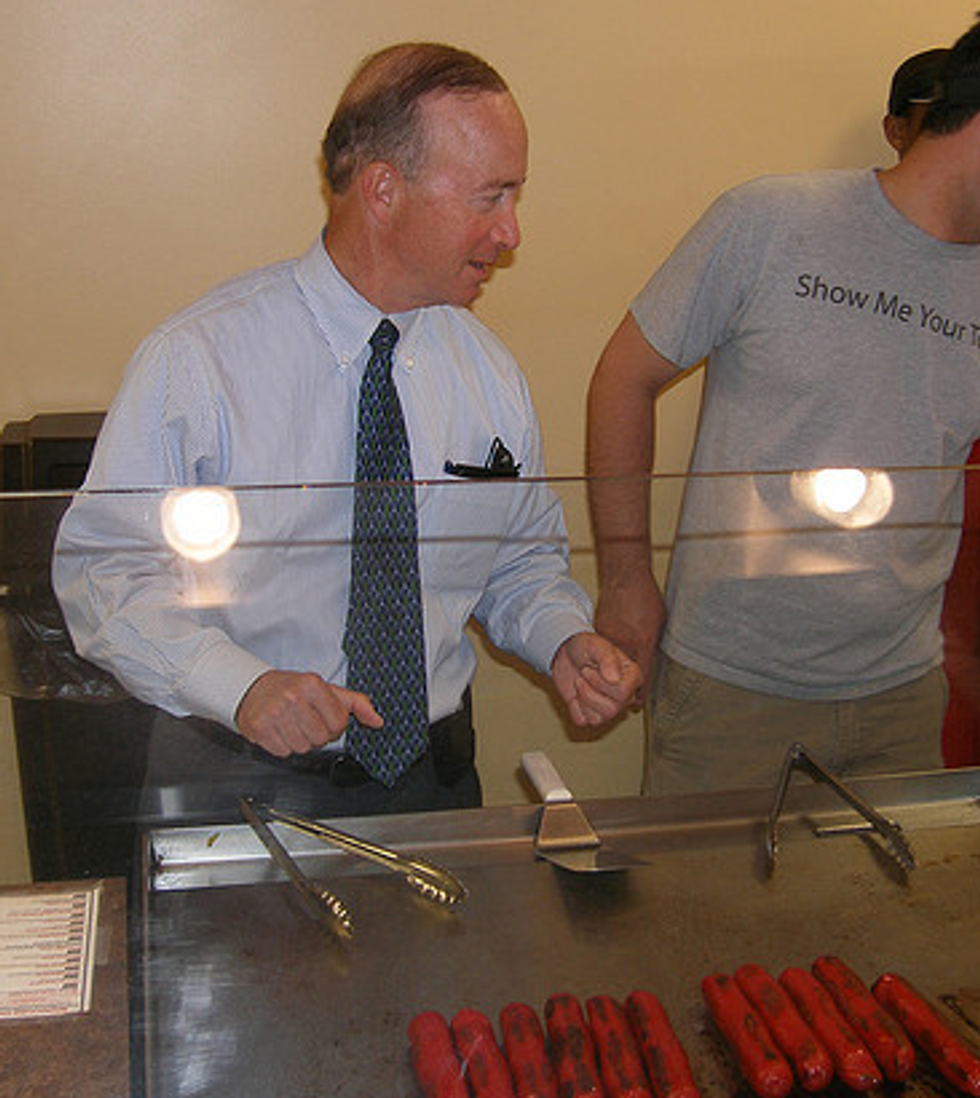 Fiscal conservatives love Indiana Gov. Mitch Daniels because he loves fiscal conservatism. He loves it so much he declared a "truce" in the culture wars in Indiana so he could focus on it. This upset people, and he eventually had to give in to them, because promising the wingnut faithful an end to non-marital and non-heterosexual and non-coital sexual intercouse is how Republicans are elected, not because America is in love with fiscal conservatism geeks, and if the GOP actually ever won the culture wars, their voters would stop going to the polls. But as Daniels starts to look into joining the presidential race, people who don't want him in it are trying to shame him into the race by propagating Daniels' big "SCANDAL": his wife, whom he has since remarried, divorced him in 1994 and moved to California, leaving him with their four young daughters. Despite not having immediate access to their mother, the children didnot die. So the skeleton in Mitch Daniels' closet is that he's a good parent?

It's really rather disgusting how many news articles have been written the past few days about Daniels' past with his wife. Why doesn't she want to follow him around on the campaign trail and be the pretty, doting prop on the stage next to him? Doesn't she want to gush to complete strangers, hour after hour, day after day, about how great her husband is at his job, and how much she loves doing her woman duties at home? She probably doesn't because she's afraid people will bring up the couple's divorce 17 years ago, they seem to suggest. WHAT ARE DANIELS AND HIS WIFE TRYING TO HIDE? THAT THEY'RE HUMAN BEINGS AND LOVE AND FAMILY LIFE AND MODERN TIMES ARE COMPLICATED? OOOOOOOOOOOHHHHH! SCAAAAAAAANDAL!

If it had been Daniels who moved to California and left the kids with his wife, nobody would give a fuck. Male politicians are expected to do this. Newt Gingrich is on his third wife because he likes to have affairs all the time, but he's totally allowed to ask Christian conservative groups for support, and they'll definitely consider giving it to him.

But a woman left her spouse? She's a bad mother! Here's the model GOP politician marriage: The candidate is supposed to be unfaithful, and the wife is supposed to put up with that, take care of the children the candidate never sees, never show any ambition herself outside the home, and travel around the campaign trail smiling and delivering brief, murmuring appraisals of their perfect, 1950s marriage.

And it is unclear how his wife divorcing Daniels is supposed to be his scandal. Are we supposed to dislike him because he wasn't STRONG enough to force his wife to stay in the marriage with either verbal threats or physical violence? Do we dislike him for marrying a person who seems like she may not always live up to everyone's impossible standard of what a perfect human being is? What a terrible choice he made! Or, worst of all, are we supposed to dislike him because he's the rare politician who actually took care of his children and was able to handle the four of them as a single dad for a few years? He should have thrown them in the pool and left them unsupervised so they would drown. Or maybe he should have stopped buying food so they would starve to death. You know, cool things that would make him seem really masculine to the voters!

We live in an America where male senators caught buying prostitutes for diaper sex are easily re-elected. And we're supposed to hate Mitch Daniels for being a responsible parent? There are signs he may be running in spite of this DEBILITATING SCANDAL. Good for him. It would be nice to have somebody in the Republican field who wasn't a totally disgusting and/or pathetic human being.