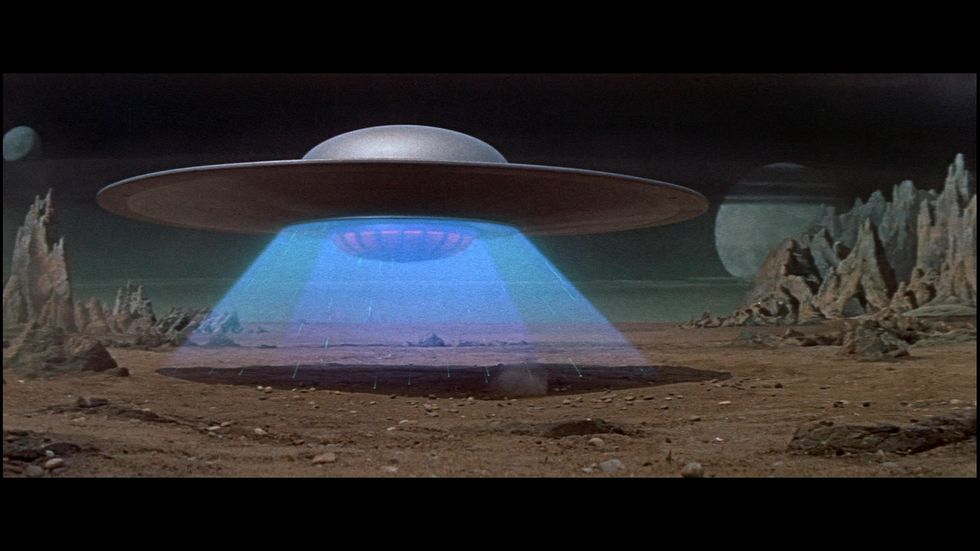 Hello Mammals! It's time once again, for reasons that no one can properly explain, that Your Wonkette presents yet  another fascinating, illuminating and disturbing Sci-Blog. Take off your pants and come on in!

Expectations for the discovery of life on Mars have fallen over the hundreds of years that Humans have been observing the planet. H. G. Wells and Edgar Rice Burroughs imagined a dying desert world where advanced alien intelligences crafted massive geoengineering projects and plotted interplanetary invasion. After more powerful telescopes were developed in the '40s and '50s, we realized that Shaparelli's Canali, popularized in Percival Lowell's books, were optical illusions and Mars's atmosphere was far thinner and more inhospitable than we thought.

Up until the early 1960s, articles had been published with detailed descriptions of Martian biology. Although we knew it was a rough place, the photos of the cratered wasteland that NASA's Mariner probes sent were sobering. The Viking landers in the '70s, with their onboard microbiological laboratories, failed to produce any definitive proof of indigenous life either. Scientists and science writers were having a more difficult time imagining that Mars ever had a habitable environment in the past, let alone being able to host living organisms today.

Just this week though, the latest and most complex of all the machines were sent to this planet, and NASA's Mars Curiosity Rover seems to have found exactly what it is that we sent it there for: evidence in the past of  seas and rivers of water on the surface and, importantly, clay deposits that could have only have formed in slightly salty water of neutral pH. Water that you could probably drink. Water that would be perfect to grow living things.

The evidence that Mars once had an environment hospitable to Earthlike life is adding up rapidly. The questions remaining - has there been Life on Mars? Is there Life On Mars now?

Do you wonder how American Representative Democracy, that gem of Enlightenment philosophy, finely crafted by the wisest men of the Age, keeps producing such nightmares of governance as Michele Bachmann and George W. Bush? Psychologists at Cornell University, building upon an earlier study finding that incompetent people are too incompetent to realize how incompetent they are, have concluded that people just aren't smart enough to be able to make Democracy work.

We know that to Republicans, incompetence, ignorance and great gaps in learning ready to be filled with narrow ideology are Features to be cultivated in both voters and government employees. Newt Gingrich's politically driven closure of the Congressional Office of Technology Assessment in 1995 is a heartbreaking and inexcusable case in point.

It doesn't have to be this way and, in fact, ignorance is a destructive mindset in this age of rapid technological progress, complex problems and multiple worldwide crises. There are few things that are guaranteed to send your humble blogscribe into a towering rage like willful ignorance.

So please, click on the linkys and learn. Do it for Democracy. Don't be Dumb All Over.

The Atacama Large Millimeter/submillimeter Array (ALMA),  World's largest Radio Telescope, officially opened this Wednesday. This state of the art mobile array of 66 telescopes was constructed with massive effort in the high, dry Atacama desert in Chile - the best place on Earth to capture millimeter and sub-millimeter radio wavelengths.  The array is the most sensitive radio telescope ever constructed and is expected to provide insight into the structure of the early Universe and detailed imaging of star and planet formation.

ALMA is operated by an international consortium of nations and scientific organizations, including a large amount of technical expertise from America's own National Radio Astronomy Observatory. ALMA began observations in 2011, while the array was still being assembled and only became fully operational  in March 2013. It's already making some incredible discoveries of galaxies formed close to the beginning of time.

The Republican party's Grand Experiment with the Shock Doctrine* in America is proceeding just as planned. The gradual, fear driven disassembly of our painstakingly constructed civil society is bearing fruit, with inevitable budget cuts to federally subsidized scientific research and the prospect that cuts to research grants now will set back Medical Science for a generation.

Oh, a small side benefit of the new Austerity: we could be leaving a critical gap in U.S. severe weather forecasting capabilities for FIVE AND A HALF YEARS, ALAN. Anybody out there who lives in a place that experiences Weather better watch out for severe storms your own damn self. And don't forget to be really lucky.

*Shameless Amazon link. Buy this book and help keep the Wonkette site in Server space and the Wonkette Staff in Fine Wine.

Well, the Catholic Church's Cardinals have elected a new Pope, Jorge Mario Bergoglio of Argentina. It's encouraging to me that he is a Jesuit, as they are well known for their intellectual curiosity and appreciation of learning. That he's taken his papal name after St. Francis of Assisi, known friend to animals and Patron of Ecology, heartens me too. Whatever else he may be, may have done or will do, at least he seems well equipped to comprehend the scientific challenges of today and to appreciate the threats facing our natural world. I wish him luck. I'm sure you think you've heard Just About Enough about the new Pope, but one thing you may not know is that he's got a Master's Degree in Chemistry. Really.

I know you all have suspected this, but the Missing link has turned out to be a Dick.

Of course, we can't run a Dick story without a few good-sized BALLS.Mr Johnson approves of these two articles.

One of the consequences of the scariest graph of this Century will be that the Arctic, which has been frozen solid for all of human history, will be greening up. The effect on the existing Arctic ecosystems is not fully known, but the Inuit are seeing animals now that they've never seen and simply have no names for. These descendants to the Thule crossed Bering land bridge around CE1000, are very observant and attuned to their environment, and have names for everything.

All of you should know by now that we just can't have a Wonkette Sci-Blog without featuring some Cephaloporn.

Finally, All Hail and Enjoy the frigging awesomeKrebs Cycle Rap!

Good by, Wonkeratti. Don't forget to use your Brains, now. You wouldn't want to lose them now, would you?