We hope anyone who needs to GTFO of the path of Hurricane Florence has already done so and is reading this in the comfort of a motel way inland, because it looks like Pat Robertson's + 25 Prayer Shield Of Stormkilling didn't work, bringing new meaning to the term "20-sided die roll." Florence is predicted to be pretty awful, but don't worry too much, because Rush Limbaugh says (again!) hurricane forecasts are deliberately hyped by the government to make people think global warming is real. Also, while Carolinians both North and South -- and Virginians, too -- are dealing with high winds, storm surge, and potentially record rains, agribusinesses in the Carolinas will add an especially fun challenge when Florence makes landfall: vast lagoons of pigshit that are likely to overflow into rivers and streams. Honestly, we're wondering why this is even an issue at all, since in 2012 the North Carolina legislature banned using science on sea level rise when it came to setting policy on coastal land use. So just remember: It might be a bad hurricane, but one state's planning has already dismissed you tut-tutting liberals. Victory!

On his dumb idiot show for dumb idiots yesterday, Limbaugh explained that the National Weather Service and NOAA have been taken over by crazed liberals who just want to scare Americans into thinking climate change is real, so the nasty mean liberal scientists deliberately exaggerate the damage. Here's a sampling, from Media Matters:

After reminding listeners they should make up their OWN darn minds about whether to evacuate -- "a number of people are trying to figure out what to do. Stay, ride it out, get out, what have you" -- Limbaugh got to the really important point: THEY just want to scare you, with their so-called "science."

You know, this is one of the — and, by the way, this is made to order for the climate change/global warming crowd. This is, they tell us, one of the most powerful hurricanes this far north, ever. And, of course, why is that? Well, that would be sea surface temperature. And why is that warmer …? (Snort!) There you go, climate change. It's being accepted as a non-argumentative fact. I don't care what meteorologist you watch or read, website or what have you. All of this seems to be acknowledged fact. So we're keeping an eye on that.

Limbaugh then explained that as a Florida resident -- or rather, from his perspective at "Southern Command," ha! ha! -- he knows just about all there is to know about hurricanes. It's basically the same bullshit he said last year about Irma. But anyway, back to the politics of mere weather, because "climate" doesn't even exist:

Also, these things have become very politicized as you know, folks. Hurricanes and hurricane forecasting is much like much else that the left has gotten its hands on, and they politicize these things. For those of you asking, "What's the politics of a hurricane?" Climate change is the politics of hurricanes. The forecast and the destruction potential doom and gloom, is all to heighten the belief in climate change.

For instance, just look at how the recent hurricane in Hawaii missed the big island, and the islands are still standing! So don't you go talking about hurricanes, Rush knows what he's talking about and the libs are just trying to scare you. The real point you should all remember, folks, he said a bit later, is that

The media is, as we speak, getting ready to portray Hurricane Florence as Donald Trump's Katrina. Do not doubt me. No matter what happens in the aftermath here, Trump is going to be blamed for this hurricane and its aftermath, and they're gonna be calling it Trump's Katrina — even, maybe, before it hits. You watch.

Don't be silly, Rush. This would be Trump's second Katrina. Like Trump himself, Limbaugh has apparently forgotten the 3,000 deaths in Puerto Rico. Not that Donald Trump would lose any supporters this time around -- he could order FEMA to redeploy to the Texas border to arrest migrant families, and then give himself another A Plus.

Don't Know Why / All This Pigshit's In The Sky / Stormy Weather

Last summer, Harvey showed the world what can happen when a major hurricane hits a city full of Superfund sites and chemical plants (short answer: "EXPLODEY," or maybe "overpressure of the container"-y). And now, Florence is out to show us what can happen when a category 4 or 5 storm dumps massive amounts of rain onto industrial hog farms, which typically feature vast lagoons of pigshit. North Carolina's hog farms produce over ten billion pounds of pigshit a year, although not in one place, hooray! With any luck, these aren't the literally explodey kind.

In 2016, Quartz informs us in a hurricane pigshit summary, Hurricane Matthew flooded 14 pigshit lagoons, although the damage was mitigated by some farmers having pumped waste into tanker trucks and hauling it away in the days before the storm. Hurricane Floyd in 1999 actually led to the failure of multiple pigshit lagoons, dumping a fecal flood into waterways and estuaries and leading to algae blooms and widespread fish kills. But surely we've learned from past pigshit overflows, no?

Andy Curliss, the CEO of the North Carolina Pork Council, told Bloomberg that lagoons can handle as much as 25 inches (64 centimeters) of rain without failing. "If we get more than 25 inches of rain, then we'll start to be concerned," he said.

According to Accuweather forecasts, up to 40 inches of rain are expected in parts of North Carolina.

Hmm. That might be bad! And if the pigshit lakes are anywhere near the level of the one in this video on the joys of living next to the things in non-stormy weather, then overflow will definitely be unpleasant and hard to avoid: 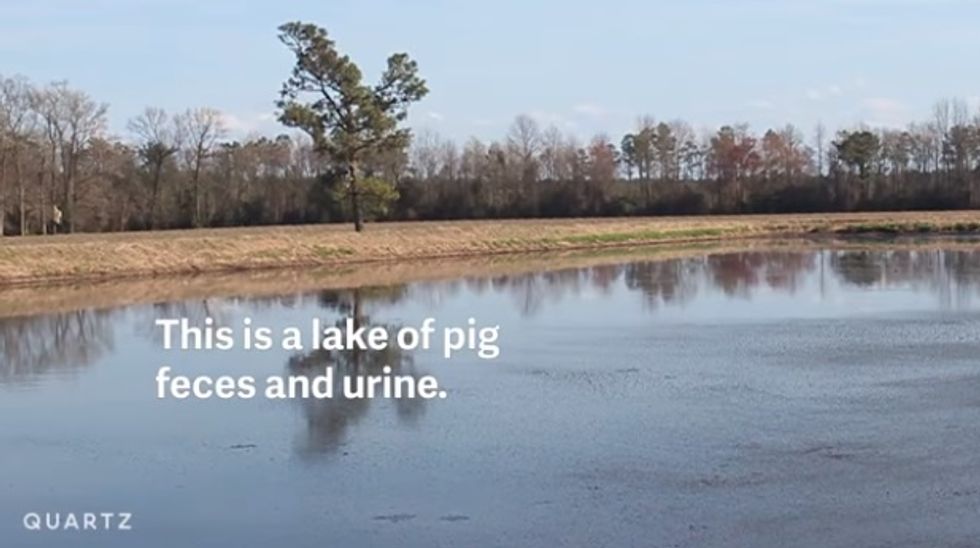 That's from a previous report on the general awfulness of having to live near hog farms in normal circumstances, which makes us think you should probably avoid that new real-estate development "The Farms At Pigshit Lakes."

Keep in mind, however, that Rush Limabaugh also ridiculed the potential for Maximum Pigshit Overflow as part of the Fake Media hype about Florence, because come on, when has record rainfall ever done bad things? And if it does, remember it has nothing to do with climate change. (Limbaugh also said similar fears were raised about Katrina but never happened -- and to prove it, he linked to an AP story that said nothing about storm-frothed pig doots. And just to prove the government is lying to you he mentioned a story claiming that sharks had been sucked up by Florence -- which turned out to be an internet fake.)

None of this can be happening anyway! Sea Levels Are Not Rising, BY LAW

Let's not forget that, back in 2012, the North Carolina state legislature took definitive action on sea level rise due to global warming, by declaring it fictional. In response to a report from a state agency that predicted sea level rises of 39 inches within a hundred years, the legislature banished such panicky science from state policy planning, because obviously that's impossible and beach homes MUST maintain their value. As ABC News reported when the measure became law,

The law, which began as a routine regulation on development permits but quickly grew controversial after the sea-level provision was added, restricts all sea-level predictions used to guide state policies for the next four years to those based on "historical data."

Tom Thompson, president of NC-20, a coastal development group and a key supporter of the law, said the science used to make the 39-inch prediction was flawed, and added that the resources commission failed to consider the economic consequences of preparing the coast for a one-meter rise in sea level, under which up to 2,000 square miles would be threatened.

This makes all kinds of sense: If something will be costly, it can't be true. State Rep. Pat McElraft, who drafted the law, explained at the time she wasn't anti-science at all, heavens no:

Most of the environmental side say we're ignoring science, but the bill actually asks for more science [...] We're not ignoring science, we're asking for the best science possible, the best extrapolation possible, looking at the historical data also. We just need to make sure that we're getting the proper answers.

That 2012 article notes that Rep. McElraft, who's still in the legislature, is a former real estate agent whose largest campaign contributions came from the real estate business. Imagine that! It also notes she lives on one of the state's Barrier Islands -- or did in 2012 -- where a mandatory evacuation is now in effect. Gosh, we hope her house is OK, because it sure would be awful if a powerful storm knocked it into the definitely-not-rising sea.

Yr Wonkette relies on reader donations to keep our heads above water. Not to mention above pigshit. Please send us money!

ARE YOU READY FOR BLOOOOOMBERG????? (No.) (Your Vegas Democratic Debate LIVEBLERG!)

You Like FIGHTS? Then You'll Love Tonight's Democratic Debate!