I Spent My Sunday Taking Down The Literary Darling Who Assaulted Me, And Boy Do I Feel Shaky. 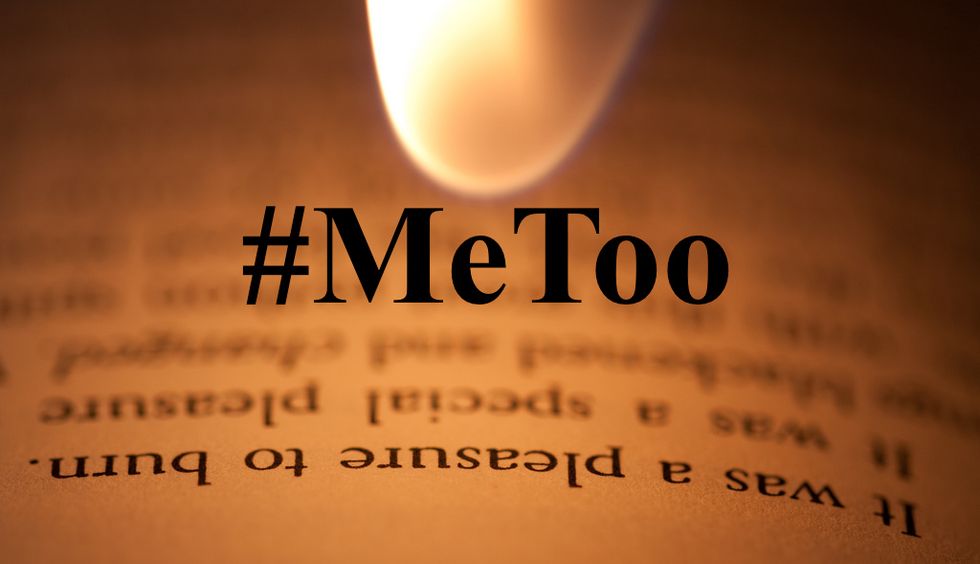 This Sunday afternoon, I got a message letting me know that another girl had just accused a former professor of mine of sexual assault in a post on Facebook. I was alerted on account of the fact that the same professor had assaulted me while I was in school.

Although it's been an open secret for a while now -- I publicly called him out at a reading I hosted years ago and made him leave the bar, and I also wrote about the incident (and another) without naming him in an article that went super mega viral in 2014 -- I never really came forward forward about it. Partly because I simultaneously wanted nothing to do with that scene and didn't want to be permanently exiled from it, partly because I wanted him to just fuck off forever. Because even seeing him that one other time, having the gall to come to a reading I hosted, thinking that he was safe, that I wouldn't say shit, had me shaking for days.

Also partly because I very honestly -- for good reason and from previous experience -- did not think anyone would give a flying shit.

But if someone else was accusing him, I was not about to let her stand there in the wind. So I wrote this and posted it on Facebook.

Back when I was a student at Columbia, and Chicago literary *sweetheart* Bobby Biedrzycki was teaching there, I went with out with him and some other folks for a drink, during which he repeatedly kept sticking his grubby ass hands up my skirt. I didn't say anything, but I called a friend to come get me. When my friend arrived, he flipped the fuck out at me, slammed my head into a brick wall, then grabbed my hair and held me up against the wall and quite angrily said "I thought we were going to fuck." I went home and threw up.

I was told for years, by people who knew about this incident, that this was all because he was an alcoholic. That he had changed his ways and was a swell, sober guy who was really devoted to social justice and activism now. That I should really consider seeking out an apology from him. Not just for him, but for myself. But he was dead sober when he assaulted another girl. He was just drinking tea.

There have been some apologies.

If you don't live in Chicago and you're not involved in the "literary scene," you probably don't know who this ass is. Oh, unless you read the Teen Vogue article on him all about how he coached an activist poetry team of teenage girls from the Goodman Theatre Youth Poetry Ensemble who performed a poem about Donald Trump's sexual assault allegations called "Pussy Grabs Back." I only found out about that one yesterday -- my fury over the bitter, bitter irony was overshadowed by my fury over the fact that he was working with teenage girls.

But he's been quite the big deal in Chicago. He's taught at Columbia College, he's worked for the Goodman Theater as an educator, for Chicago Public Schools' Gallery 37 program. He calls himself a feminist. He was, for years, part of the very highly esteemed 2nd Story reading series.

Up until yesterday, anyway.

Incidentally, last week, my former boss at Death and Taxes and Spinmedia left his job at Billboard over sexual harassment allegations from an intern who worked there even before I ever did. I hadn't experienced that side of him, although he did pay me $8,000 less than the men who worked there, so I cannot say I was too surprised.

I can say I was glad.

I've been very glad, over these past few weeks, to just sit and watch all these men go toppling down. It's been immensely satisfying, to see women (and men) be heard and listened to, to see these men who thought they were protected by silence and fear and years find out they were wrong. Because they were never really the whole reason for the silence and fear to begin with, on their own. It was fear of the larger community to which they belonged, fear of being ostracized, fear of having people protect your abuser and turn on you. That is changing.

As big as all the Bill Cosby, Harvey Weinstein, Bill O'Reilly, Kevin Spacey stories are, as important as they are, they did more than just take down big celebrities. They made us all stop giving a fuck.

My story, and the story of the other women assaulted by this man is much smaller in scope. But it's big in the sense that this is happening all over. I've seen it happen in the Chicago comedy scene and in other smaller communities as well. It is sending a message to any man, any person, anywhere, who has sexually assaulted or harassed someone, abused their power in this way that he is not safe and is not protected either by those they hurt or the communities they belong to. It is sending a message to every would-be harasser or assailant that no, they don't actually have the power to get away with that shit. We are taking that power away. The silence they counted on is no longer guaranteed.

Right now, there are men across America, sitting with twisted guts, wondering if they will be next, if those they hurt are going to be the next to come forward. And they very well might be.

UPDATE 2/20/22: Bobby Bierdzycki is now going by Robert Bierdzycki and is apparently a Performance Studies PhD candidate at Northwestern. Congratulations whoever is in charge of that program for not being able to Google.