ICE To Dad: There's No 'My American Kid Has Leukemia' In 'Deportation' 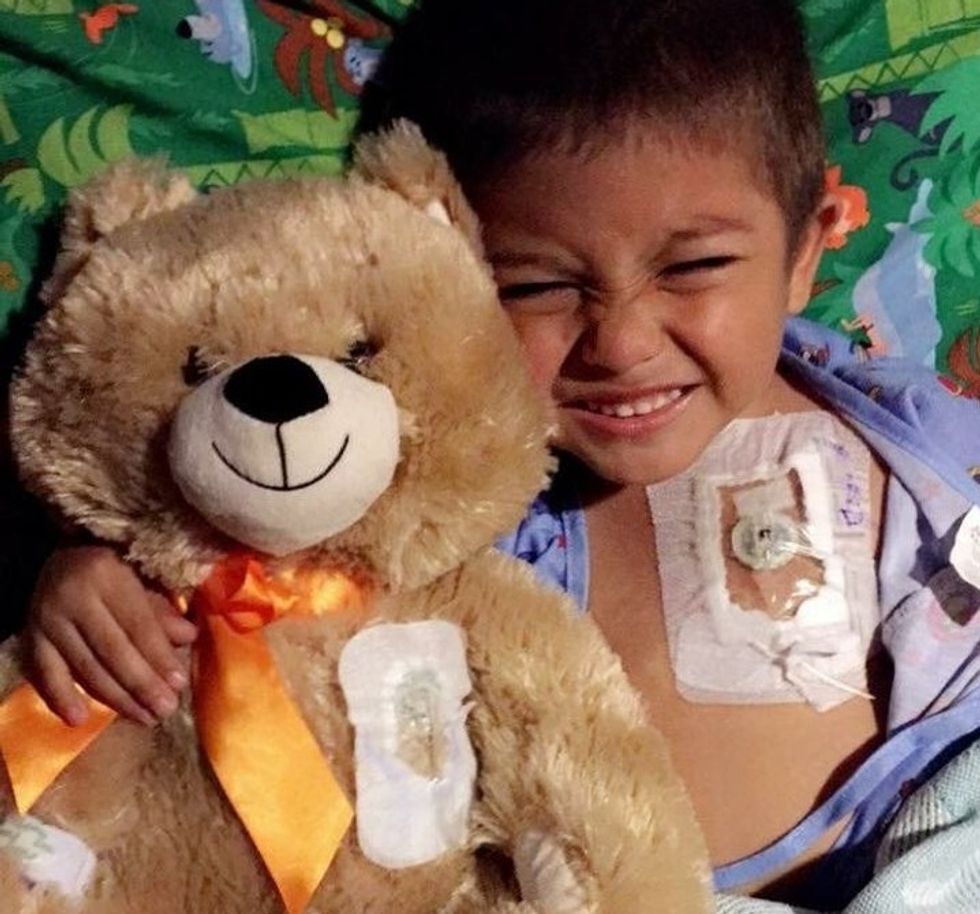 Jayden is one brave little boy.

That little guy up there is Jayden Berrones. He was born here in the USA. He has a very rare form of leukemia, and his dad, Jesus Berrones, is the only one in his family who can administer Jason the medication he needs, because his mom, Sonia, is pregnant and the fumes from the medication can cause birth defects. Oh, small problem: Jesus Berrones is one of those terrible scary illegal immigrants who threaten all that's good and holy about America, and ICE wants him out of the country. Today.

Jesus was brought to the USA by his parents when he was 17 months old; he's a bit too old for the DACA program, and -- to really make him one of the worst of the worst -- when he was a teen, he was deported to Mexico, then returned to the US illegally, twice. But up until now, despite having a deportation order against him, ICE allowed him to stay in the USA because he has a child with cancer; during the Obama administration, even ICE recognized that as a reason to delay deportation.

None of that weakness anymore, though. America is not about to be laughed at anymore by criminal gangs and parents of children with cancer (same thing, right Cletus?). Jesus Berrones has five kids, all of them citizens, and Sonia is a citizen, too, but that's no reason to let him stay here: ICE ordered him to report to their offices today, so he can be deported to a country he's never known, because everydamnbody has a sob story, and Donald Trump cares about America First. Sure, it will now cost the government money to send a nurse to administer those meds to Jayden. But we're willing to pay that price, because now a US citizen can take Jesus's job as a furniture upholsterer. Oh, yes, and Sonia and the kids will now have to go on welfare, probably, but again, totally worth it to get rid of a repeat illegal border crosser just like the ones who always turn into murderers and rapists.

Berrones isn't willingly going to the ICE office in Phoenix today, though. He's staying in a Sanctuary church, Shadow Rock United Church of Christ. ICE's guidelines for arrests -- or "enforcement actions" -- at "sensitive locations" (like churches, schools, and health care facilities) say only that immigrants shouldn't be scooped up at such locations unless ICE really, really has a good reason, like if there are "exigent circumstances" or the target has a serious criminal history. Or if they just want to, because "exigent circumstances" can really mean anything. They know where Berrones is, and if he doesn't turn himself in today, that may be all the exigency they want or need. Or maybe they'll wait. This ought to keep 'em all scared and uneasy, every last one of them, huh?

Berrones's attorney, Garret Wilkes, has applied for another stay of deportation, which used to be fairly routine for parents of severely ill children. Not so much these days:

“It would be catastrophic in every literal and emotional sense of the word. This is not just a man who is a husband and a father, he is an example to these kids,” Wilkes said.

Yeah, say the alleged human beings who'll show up in our deleted comments: an example of IGNORING THE LAW.

Jayden was diagnosed with leukemia in 2016, and is a very brave boy. His teddy bear had a hospital arm tag and a see-through medication port cover just like his. Jayden still has at least two more years to go before he completes his follow-up treatment; he needs to have pills several times a day, plus monthly visits to Phoenix Children's Hospital. Maybe he'll remember his dad. Maybe his dad will be able to hide in the church until sanity returns to this country. Still, you can probably find plenty of people who would look at Jesus Berrones and not see a father who's taking terrific care of his family and his sick little boy, but rather a dangerous criminal alien. Look at this dangerous criminal alien profile:

Wilkes said Berrones was caught driving with a fake driver's license in 2006 following a traffic stop when he was a minor. He pleaded guilty to a felony charge of solicitation of forgery, which resulted in him being voluntary returned to Mexico when he was 17 or 18. He returned illegally to the U.S. two weeks later, but was voluntary removed again in 2010, Wilkes said, but again returned illegally.

In 2016, Berrones was caught by ICE again. He was facing a felony illegal re-entry charge, but instead was charged with a misdemeanor unlawful entry charge.

That smart bit of lawyering by Wilkes made Berrones eligible for a 1-year stay and a work permit because of Jayden's condition. In June of last year, he was told to check in with ICE every six months, but when he did so on December 29, he was told he'd been scheduled for deportation in 30 days. ICE denied the most recent request for a stay on February 8, and today, he's supposed to get out. Wilkes is still trying to get Berrones an appearance before an immigration judge, but for now, it's just the doors of a church and some brave Christians keeping Berrones in the country.

We won't be at all surprised if the Trump administration decides defiance of the law, and these troublemaking sanctuary people, have to be made an example of. Just imagine what exciting video it would be if an armored personnel crashed through the doors of that church! It would be on Fox, over and over again! We'll keep you updated.

In other news, the Washington Post reports that while Donald Trump promised his deportation efforts would focus on cleansing America of criminal aliens, gang members, and other Bad Hombres, the reality is that the biggest jump in arrests by ICE has been among non-criminal undocumented immigrants. Those have almost doubled. It probably helps that the people who got arrested foolishly thought that if they had no criminal record, they'd be fairly safe. Joke's on them! Under the New Cruelty, everybody is a suspect.

But don't worry: Donald Trump wants everyone to have due process. If they're a wife-beater working for him or a rapist raising money for the RNC at least.

UPDATE: All the bad publicity worked: ICE has granted Berrones a stay of deportation and he's going back to his family.

Yr Wonkette is supported by reader donations and incandescent rage. Please click here to help us convert the latter into things you can read.