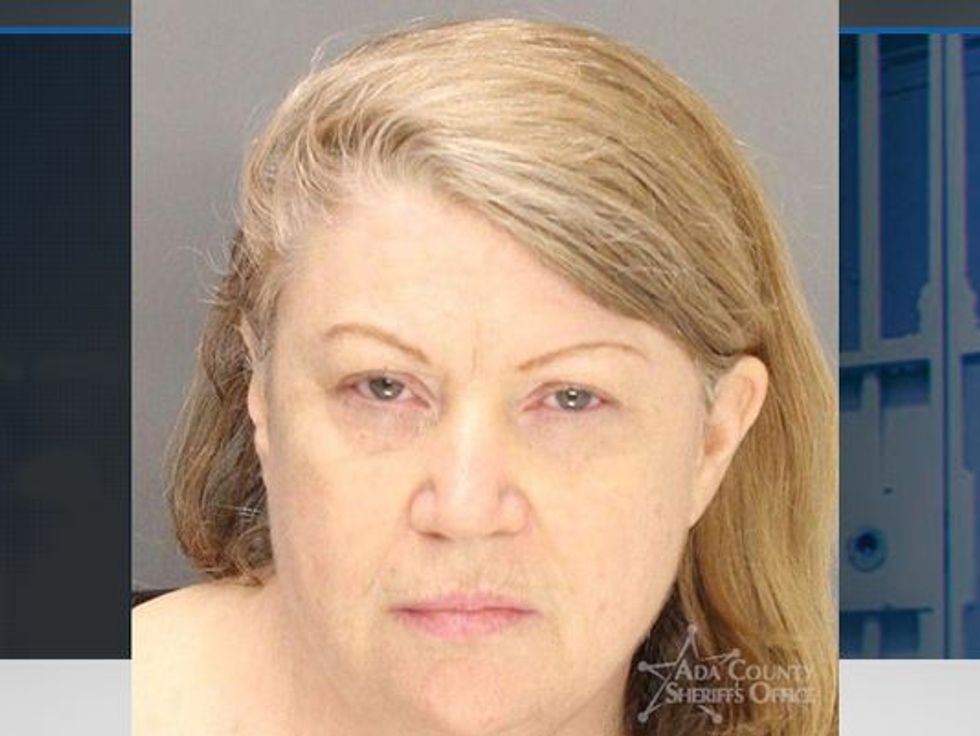 A Boise, Idaho, woman has found an assertive new way of bringing people to the Lord that makes the Mormons and Jehovah's Witnesses look like slackers:

A Boise woman is facing felony charges after police say she attacked a Jewish acquaintance, stomping on the woman's neck as part of a bizarre bid to convert her to Christianity.

Margurite Dawn Haragan, 58, has been charged with two counts of malicious harassment in an attack police have labeled a hate crime.

It's not clear how Haragan knows the victim, identified in court records only as "A.G." On February 5, Haragan showed up at the other woman's home with an important message of salvation:

"The defendant was banging on the front window yelling at her that she better believe in Jesus and she was not going to leave until she did believe in Jesus," Ada County Prosecutor Dave Rothcheck said. [sic: it's Roscheck -- Dok Z.]

A.G opened the door to tell Haragan that she was not in the market for any new religion that day, and to see if she could write down her license number, but Haragan slapped her face, grabbed her by the hair, and dragged her to the ground.

"The defendant began kicking the victim in the stomach and thigh area," [Roscheck] said. "During this time the defendant was screaming at the victim that she better accept Jesus or she would not let up."

For good measure, Haragan also stepped on A.G.'s neck and pulled her hair, a move which most Christians would recognize from Paul's Letter to the Luchadores. A.G. eventually said she'd convert, which seemed acceptable to Haragan, who let her go. But two days later, Haragan returned, cut up all the mail in A.G.'s mailbox, and carved "death bin bond" into the mailbox, a phrase which Yr Wonkette has only found in news and blog posts about this story. We thought maybe it came from an anime or something.

In court last Thursday, Haragan "told a judge she did not understand what she was being charged with, she did not want a public defender, and she would not hire her own lawyer." She had a compelling explanation for this as well:

"I am a sworn-in deputy of Ada County and I also give my oath that what I say is legal and binding," she told Judge John Hawley.

Needless to say, there are no records of Haragan ever working for Ada county or any nearby counties. We're guessing maybe she's had a bit too much Sovereign Citizen reading in her web browser, plus probably some mental issues in her own central processor, just maybe. The judge went ahead and appointed a public defender, for whom Yr Wonkette would like to start an Advil and Scotch fund. The judge told Haragan, "These are serious charges and you really do need an attorney to assist you." So there's Idaho being considerably more progressive than Texas, where they let clinically insane people defend themselves in murder trials.

Haragan could face five years in prison for each count, or she could lead the next big movement in really aggressive evangelistic ministry. Maybe both.