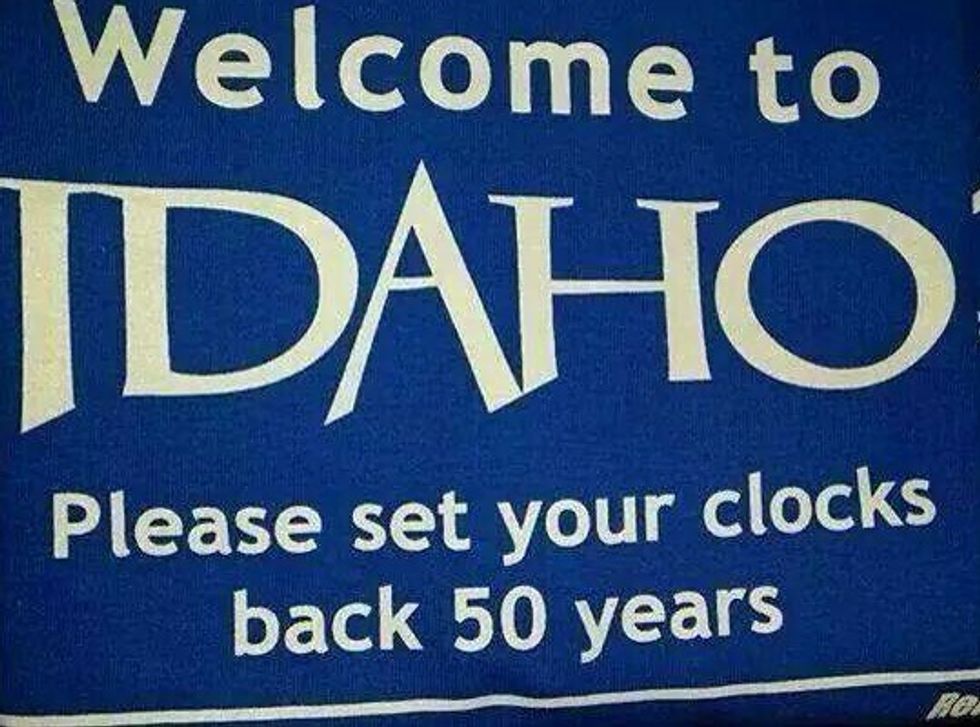 Never content to let Texas, Florida, or other former members of the Confederacy monopolize the competition for Most Embarrassing Bunch Of Redneck Bigots, a group of Idaho Republicans has adopted a resolution opposing the creation of a new community college in eastern Idaho. Idaho has historically lagged behind the rest of the nation in providing two-year colleges, since locals figure the state's three universities provide far more higher education than is good for young people already -- the Boise area only got its first community college in 2007, for Crom's sake. But the Bonneville County Republican Party's opposition to the proposal to upgrade Eastern Idaho Technical College in Idaho Falls into a full community college is only partly based in opposition to the cost (and liberal indoctrination!) of an expanded educational facility. The local Rs are also terrified the new school will attract a whole bunch of Muslim refugees, furthering the already rampant takeover of rural Idaho by scary Muslims who are all terrorists, rapists, and terrorapists.

Not only would the new community college district "suck almost 1 million dollars out of the county economy every year, add a total tax burden from all tax sources of approximately 14 million dollars and require the hiring of over 200 new government employees," according to the resolution, it also wouldn't provide a single bit of economic benefit, because the only people who think higher education spending is good for the economy are liberals, duh. That very notion "ﬂies in the face of the Republican principle that the government which governs best is the government which governs least" -- and yeah, the Bonneville Rs are typical of the folks who make Idaho a true two-party state: Rightwing Republicans, and Barking Mad Wingnut John Bircher Rightwing Republicans.

Beyond the horrific infringement of liberty a community college represents, some supporters of the resolution lobbied successfully to add a clause warning that

there is no guarantee that it will not engage in controversial and divisive activities beyond the scope of its educational mission like [the College of Southern Idaho] did when it established the [CSI Refugee Center].

Sorry, Idaho, You Are Getting Jihaded By Radical Muslims Now :(

For the past few years, Idaho wingnuts -- including of course the "III Percent" militia, because what good is a rightwing political freakout without an armed wing -- have been freaking out over the supposed invasion of Idaho by radical Islamists, a threat the Bonneville GOP also wet its pants over in early 2015. The supposed hotbed of Islamic radicalism for the whole state is a refugee center at the College of Southern Idaho in Twin Falls, which has been the focus of armed protests by the multi-moron militia for a couple years now, because while the center has been around for 30 years, a bunch of heavily armed paranoid idiots found out about it during the Syrian refugee crisis, and why would you let a good chance for a gun-toting nationalist panic go to waste?

Former Idaho Falls city councilman Larry Lyon explained his opposition to the community college, which doesn't exist yet and whose backers haven't said anything about having an attached refugee center, but it COULD HAPPEN:

Once these things have been created, who knows what kind of weird stuff they’re going to do?

Pretty much the usual community college stuff: community education, vocational training, spreading sharia law, providing a low-cost chance for new students to get their general-education credits out of the way before transferring to a university, teaching the basics of bomb-making and subverting Christianity, adult education, and of course indoctrinating the young with radical liberal ideology.

Lyon added, after the "weird stuff" comment, "I don’t mean to make light of the plight of refugees," because of course not. He just wants to make sure we only take in the right sort of immigrants, preferably white middle-class Christian immigrants who speak English and will fit in without scaring anyone. Maybe from Kansas. Middle East, Midwest, it's all about the same.

Members of Idaho's relatively sane (but still rightwing) mainstream Republican establishment, like Gov. C.L. "Butch" Otter (personal motto: "Yes, that's really my name") have been very supportive of the proposed community college, which of course leads folks like Lyon to distrust the proposal as a dangerous leftwing plot to end liberty forever through tyrannical taxation:

“They’re billing it as a community college … but we’re also creating an entity that has the power to tax, to take away our property by force,” he said in an interview.

He warned the college was an excuse to create more “edu-crats,” and that eastern Idahoans already have enough access to higher education through online colleges, Eastern Idaho Technical College and University Place.

The availability of online courses takes up a substantial chunk of the Bonneville County GOP's resolution, because people who already distrust education wouldn't know the difference between hands-on classroom learning and watching YouTube videos in the first place.

State Sen. Dean Mortimer of Idaho Falls -- also a conservative Republican, but not from the twitchy wingnut caucus -- noted taxes for the community college district wouldn't exactly drive local homeowners to the poorhouse: Yhe oppressive tax burden for the average household would be about a dollar a month. In an interview, Mortimer presented the wild-eyed liberal case for the school:

The vast majority of the college’s budget will come from tuition, he said, and estimates by economists indicate it will generate $66 million in additional economic activity.

“We could not find a better bargain in education than what this community college effort is proposing,” he said.

Freakin' Commie. Mortimer also noted the anticipated tuition for the new school would be $125 per credit hour, compared to $348 at Idaho State University in nearby Pocatello. That may sound attractive, but once you get young people addicted to book-learning at a low price, there's no telling what horrors may follow: reading books, joining a lesbian feminist collective, or god help us, going on to grad school.

Here's the brave resolution in all its glory; we're especially impressed the first six "whereases" are boilerplate quotes about freedom 'n' liberty 'n' tyranny, in a document opposing too much book-learnin'. Oddly, they adopt the atheist (and well-read) rabble-rouser Thomas Paine as their token Founder, not that overeducated smartypants Thomas Jefferson:

Despite the frothing objections of the Bonneville County GOP, Mortimer told Idaho Education News he's hopeful voters will recognize the need for a full community college in a referendum scheduled for May. “I think it will happen -- with a lot of work," he said. Presumably while also hoping the militia doesn't turn out to monitor the polls.

Yr Wonkette is supported by reader donations, and we'd be just tickled if you'd send some money to us for flak jackets and bunker improvements for our Idaho bureau. Please click the "Donate" clicky below!