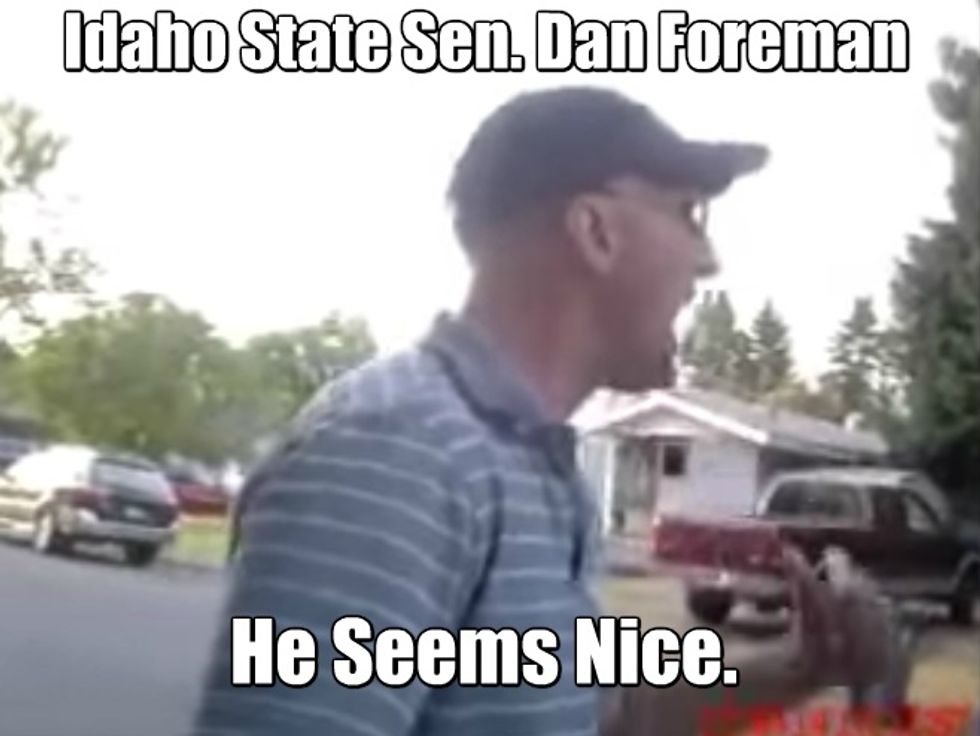 Could somebody remind him of that thing about beanbag, and how politics isn't that?

Meet freshman Idaho state Senator Dan Foreman, former Air Force colonel and police officer. Foreman defeated a three-term Democrat last fall and, as one of his first achievements, introduced a bill that would have charged women who have abortions with first-degree murder. Their doctors, too. (It went nowhere, since even Idaho legislators know defending unconstitutional laws is pricey.)

Senator Foreman wasn't having a good day at the Latah County Fair in Moscow (ID) on September 14. He said that while he was at the Republican Party booth, he and his colleagues were victims of rude gestures, criticism, and hateful words, and claims some of that came not just from ordinary fair-goers, but also from management. He said the Democrats' booth wasn't subjected to nearly as much abuse, which we can sort of believe, what with Moscow being a college town surrounded by the rural counties that elected Foreman. So the poor senator was already in a bad mood when an unhappy constituent approached him as he was leaving. Things got a little heated, as this body cam video from a Latah County Sheriff's deputy shows (you Terrible Ones don't watch our videos, but this little snit by a little shit is worth the 37 seconds):

By the time the deputy got there, the constituent was done talking, and all we see is Foreman losing his shit, complaining to the deputy, "This guy says I'm not doing my job, and he's lecturing me on the Constitution." That had to be a serious insult for a Christian conservative who knows his U.S. Constitution very, very well -- he once informed another constituent, "I don’t believe in the separation of church and state -- it’s a figment of somebody’s imagination." This is not a man who's open to being lectured by some Democrat loser on the Constitution, thank you.

The deputy, unimpressed, suggests Foreman should move along, and he does, but as he's angrily stomping away, Foreman calls the miscreant a "liberal nut-tard" and adds, "Go ahead, don't vote for me, because you didn't." The incredulous voter asks, "Nut-tard?" and the senator spits back, "Yeah, you're a liberal nut!"

Once he realizes he's storming off in the wrong direction, Foreman turns around and, as he stalks off, mutters, "Go straight to hell, you son of a bitch!" As a good Christian does.

Frankly, the more we watch this video, our favorite part is in the very first second: As the deputy approaches the altercation, a bystander drily comments to him, "Trouble in paradise!"

Foreman later told the Moscow-Pullman Daily News the man had "sought him out" and was just generally awful, accusing him of abusing his power and not doing a good job of representing his district.

"He attacked me personally and was unnecessarily rude," Foreman said.

He also believes the fair was politically biased against him and other Republicans, what with all the nastiness he was subjected to at the Republican booth.

"I would like to know why the Republicans get treated differently than the Democrats by the county fair -- I want a personal apology for how we were treated," Foreman said.

That demand for an apology later escalated to a vow to not return to the fair next year unless management apologizes for the unspeakable treatment he and other Republicans were subjected to.

Foreman also told the Moscow paper he "stands by every word he said to the man," but that if people show proper respect, he's happy to have a civil conversation with them. Just not if they're liberal nut-tards.

Foreman said the man in the video is just "an example of the nuttiness of the loony left" that is all too common in Moscow.

"Loony left-wing people think if they disagree with you they have the right to yell," he said.

Foreman has a bit of a habit of letting liberal loonies know their opinions matter to him not one whit; when a constituent wrote to him to disagree with his plan to push for tax subsidies for parents sending their kids to private schools, Foreman's reply skipped the usual boilerplate thank-you-for-your-concern stuff and went straight to advising the woman that he's "under no obligation to do what you want" because she's not a conservative like the majority of voters, who picked him, and he WON, dammit:

Furthermore, you must understand I am a Christian, conservative Republican. I won my election, because the MAJORITY of voters in my district voted for me. I defeated your left-wing liberal candidate, because a majority of voters chose me and my clearly outlined political platform of conservative values. So, your side lost, and my side won. … You simply don’t like the fact that you are not getting YOUR way any longer.

We predict that Mr. Foreman can look forward to a long, successful career in Idaho politics, assuming he doesn't have a cerebral hemorrhage yelling at those who oppress him.

UPDATE: As for that huge conservative majority? Foreman won his seat last year with a margin of 50.76% to 49.24% -- a whopping 336 votes over Dan Schmidt, the incumbent Democrat he defeated.

Yr Wonkete is supported by reader donations. Please CLICK HERE so we can keep you up to date on steamed Idaho spudboys.