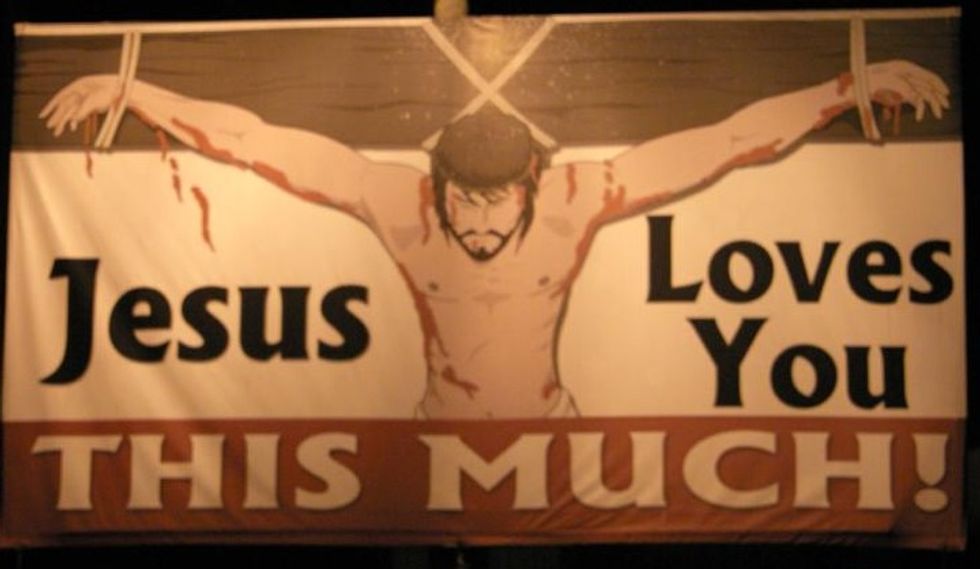 In a shocking rejection of the Lord, Idaho's Kootenai County Republican Central Committee has refused to move forward proposed resolution to declare Idaho a "Christian state." Tuesday night's vote greatly disappointed God, His Only Begotten Son, and the members of the committee who had been pushing the nonbinding resolution as a way of telling the world that Idaho was not going to stand for all the vicious attacks on Christianity that have been going on everywhere.

"formally and specifically declared a Christian state," guided by a Judeo-Christian faith reflected in the U.S. Declaration of Independence where all authority and power is attributed to God, the resolution reads.

It also claimed that Christianity in U.S. America faces "strident attack" because there aren't any prayers or Bible readings in the public schools like God wants.

Supporters of the resolution had some excellent arguments for honoring America's Judeo-Christian heritage by declaring Idaho a Christian state (the Judeos would be fine on their own, we guess):

"We're a Christian community in a Christian state and the Republican Party is a Christian Party," said Jeff Tyler, a member of the committee and backer of the draft resolution.

"It's important that Christians stand up and be unashamed to say they're Christians."

Ultimately, the more libertarian-minded wing of the Kootenai Republicans prevailed; before the vote, Bjorn Handeen, who describes himself as a "Ron Paul- or Libertarian- inclined" Republican, said the proposal was pushed by party members who "are more theocratically inclined." He told a local paper he intended to vote "Not just nay, but hell nay."

The proposal was rejected without a formal vote Tuesday when Mr. Handeen

offered a motion, before a formal vote, not to consider the resolution at all. At least 2/3s of the 52 committee members in attendance supported Handeen's motion. The meeting attracted a standing-room-only crowd.

The decision to reject the proposal may have been driven in part by a sense that Idaho has been quite embarrassing enough this week, what with the guy who doesn't understand how vaginas work (he now says he was "taken out of context"), and the lady who's OK with faith-healer parents letting their kids die of easily treated illnesses.

Our little state is doing its best to be just as weird as Florida, Arizona, and Texas, despite their much larger populations, and there's just no need to overdo it.

As of Wednesday morning, Idaho has not yet been hit with plagues of frogs, rivers running with blood, or even any noticeable increase in leprosy.