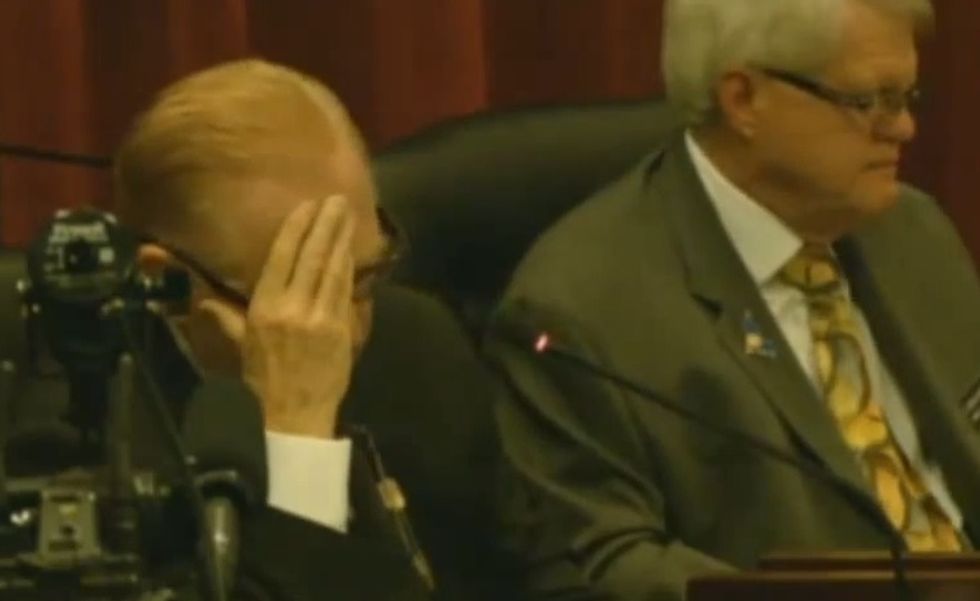 The Idaho House's State Affairs Committee voted Thursday to kill a bill that would have provided statewide housing and employment protection for LGBT people by adding the words "sexual orientation" and "gender identity" to the state's Human Rights Act (which yes, it actually has one of, go figure.) Activists for the "add the words" campaign have been trying for a decade just to get the proposal a hearing, so in a small way, this was progress, as previous legislatures haven't even advanced the bill to the committee. Last year's legislative session saw mass sit-ins at the state Capitol, including the arrest of a former legislator who refused to leave the House floor.

And the hearings, which included hours of testimony from Idahoans who have been discriminated against -- and from parents whose LGBT children committed suicide -- seem to have really opened the eyes of at least one Republican legislator, Rep. Linden Bateman from Idaho Falls. On the edge of tears, Bateman shared what he had learned about our shared humanity:

My heart has been touched by this hearing. I’ve gotten to know you, and I know from this point on -- forever -- I will be kinder and I will be more compassionate to those who bear a heavy burden.

Somewhere in scripture it says that if we are not kind to the needy, and to the lonely, and to the afflicted, and to those who bear a heavy burden, our prayers will not be answered. I will be kinder, and I will be more compassionate.

And then he went ahead and voted to prevent the bill from moving out of committee, although he added, "I’d like to go on record that I will support a compromise," presumably something that would grant some protections to LGBT people while still protecting the sacred religious rights of people who don't want to bake penis cakes or let gay people into their restaurants or something. But his heart has been opened, right?

The Spokane Spokesman-Review reports that the sticking point for many Republican lawmakers was that the bill lacked sufficient definition of "sexual orientation," and would thereby somehow threaten the rights of religious people and might have other icky effects.

During the hearings that preceded the vote, Rep. Brent Crane of Nampa feared that if "sexual orientation" included protections for transgender people to use any restroom they want, why then even sacred places might not even be safe!

So I’ve been hearing all along that places of worship are protected. If a transgender person comes into church, they can go into the female bathroom?

Another opponent of the bill, Laurie Burchfield of Meridian, had a somewhat more baroque scenario for the inevitable consequences of the bill:

Ladies and gentlemen, do you really want to legalize under the this bill pedophilia, sadism, bestiality, necrophilia … polygamy and others?” Her comment drew a muted groan from the audience, prompting committee Vice Chair Gayle Batt, R-Wilder, to caution the crowd to maintain decorum. “This is a dire concern to me,” Burchfield told the committee, “and I know to thousands of women across Idaho who are not able to be here today because they are home with their families and their children that they are raising. … Everyone should be free to go a public restroom without fear of people of confused sexual orientation … parading their genitalia.”

Eventually, such rage against the latrine won the day, and the bill was killed. While the state legislature has refused to protect LGBT rights, 10 Idaho cities, including the capital, Boise, have passed their own anti-discrimination ordinances. As of yet, no Christians have been hauled off to jail for preaching from Leviticus.