Idaho Transportation Dept. Has Had It With You Stoners Stealing '420' Mileposts 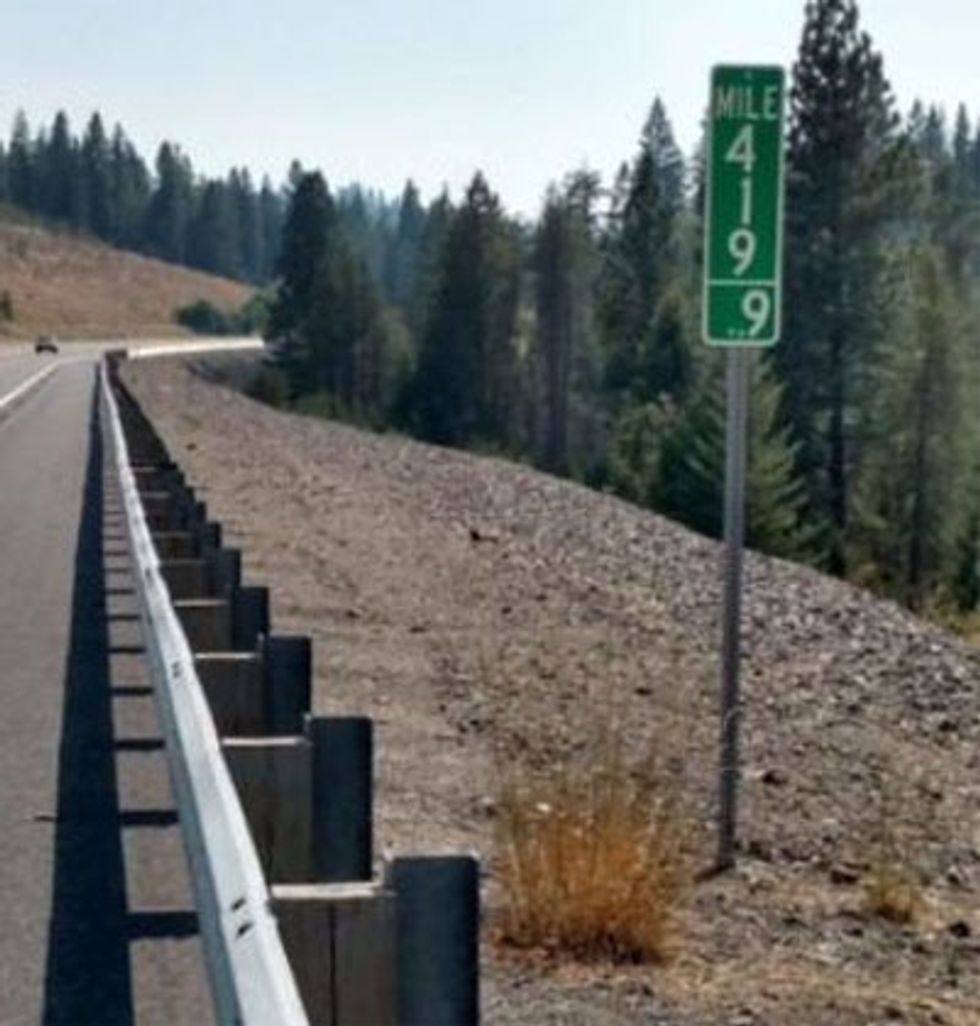 In general, Yr Wonkette is quite open and loving and tolerant toward potheads, who (we hear) tend to be gentle souls who natter on endlessly about how industrial hemp will save the world through Fiber Magic, and then start giggling like idiots whenever they see the number "420." It's about as automatic as any male over the age of 12 seeing the whole number that falls between 68 and 70. But in the Great State of Idaho, where officialdom is not friendly to lovers of the gentle bud, the state Transportation Department is sick and tired of stoners stealing the "Mile 420" marker on US Highway 95, just south of Coeur d'Alene, a town name that is hard to spell even when you're not all potted up on weed. And so they've replaced the sign with a marker reading "Mile 419.9."

As best we can tell, the ITD hasn't actually relocated the marker a tenth of a mile away from the old one, which strikes us as the sort of sloppy work that could only result from a bunch of road workers who've been toking up. Maybe they should have followed the lead of Colorado, which went with the more accurate "Mile 419.99" when it made a similar swap last year.

Also, too, the Guardian scrupulously notes that this is the only "420" sign in the state that ITD has had to replace, since most roads in the state don't actually run over 400 miles. In addition, we are informed that "the number '420' has long been associated with marijuana, though its origins as a shorthand for pot are murky." Despite the popular urban legend that "420" was the section of the California Penal Code (ha! "penal"!) dealing with marijuana, we found a handy explainer from the LA Weekly that puts to rest that myth, via Snopes:

Nope. Section 420 of the California penal code refers to obstructing entry on public land. The penal codes of other states list different entries for 420, but none of them matches anything having to do with marijuana.

Rather, the Weekly explains, it refers (ha! "reefers"!) to the smoking habits of a bunch of Marin County high school students who called themselves "the Waldos" -- because, logically enough, "they liked to hang out in front of a wall." The Waldos would smoke the weed at 4:20, conveniently after school, in front of a statue of Louis Pasteur, for some reason, though they never called themselves the Louies. They spread their slang at Grateful Dead concerts, and then "Deadheads spread it outward like a virus from their San Rafael ground zero."

As of yet, Idaho has not had to borrow another signage swap from Colorado, which, in addition to doing away with "Mile 420" along Interstate 70, also "placed a Mile 68.5 sign near the summit of Cameron Pass, west of Fort Collins" because "bawdy bandits kept taking the Mile 69 sign." Idahoans apparently don't go in for that sort of thing.

As of yet, no such simple numerical solution has become available to Wisconsin, which has a recreation area named after America's WW II Ace of Aces, Dick Bong.