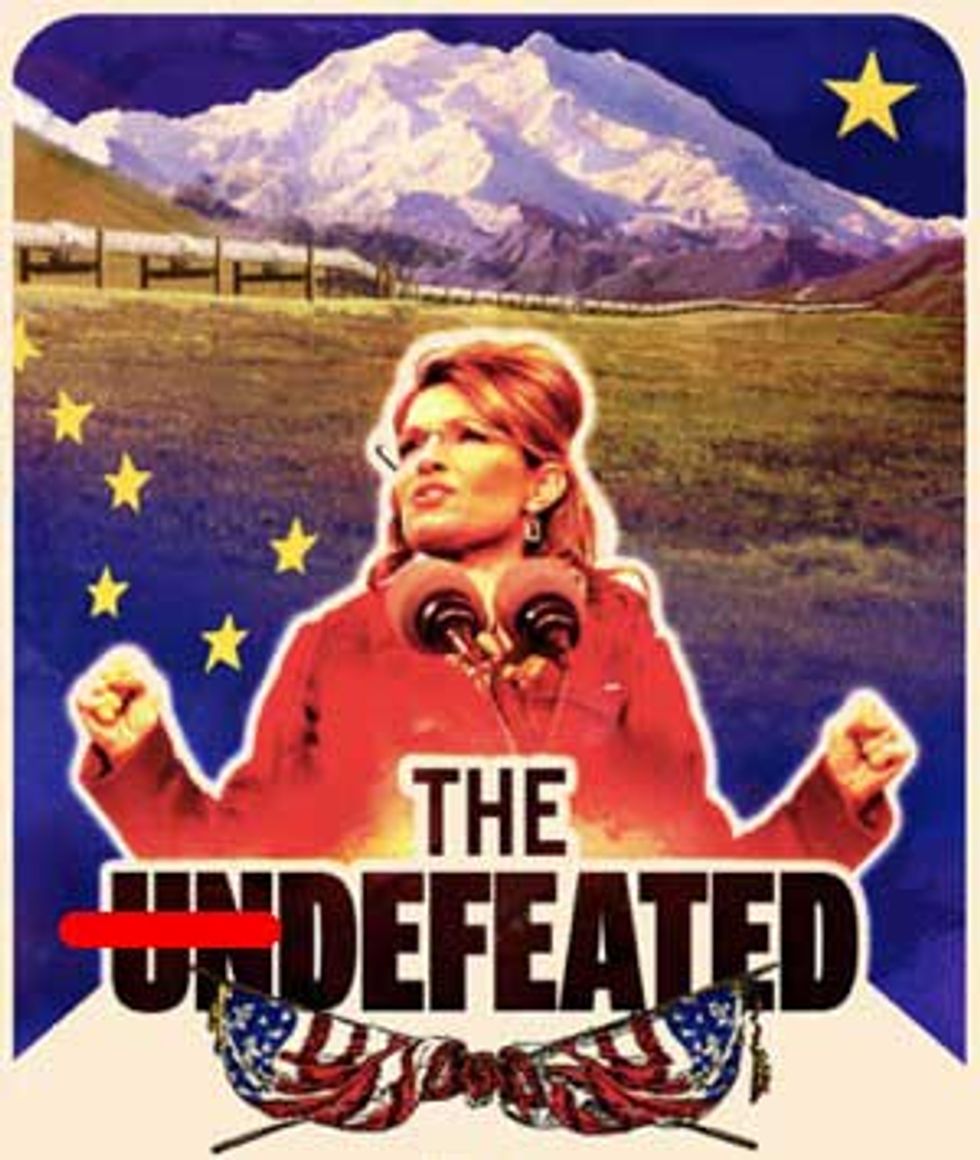 Good news, America! Her ex-royal highness of the meth capital of Alaska and the poster child for why teaching "abstinence only" to your gaggle of children will just make you a grandma that much faster has deigned to make words that sound like she will maybe possibly consider thinking about potentially mulling an attempt at getting the folks up thar in Alaska who still can't get the bitter taste of her stupid out of their mouths --59 percent still want to drink bleach at the sound of her name -- to vote for her:

“I’ve considered it because people have requested me considering it,” she said. “But I’m still waiting to see what the lineup will be and hoping that … there will be some new blood, new energy, not just kind of picking from the same old politicians in the state.”

By "people," of course, she means these idiots, the Tea Party Leadership Fund, aka Alaska teabaggers, who thunked up a plan to save 'Merica from the Democrats by begging Sarah Palin to please be their senator even though rumor has it she is a resident of Arizona now, but those are just minor constitutional details, like, waaaay at the bottom, and who has time to read when you can just wait for the movie?

Of course we know she won't actually run, because running for office is almost like working (and then you get elected and get to take ALL THE DAYS OFF because Congress is super fucking lazy so we can see why this job holds some appeal for Palin). Still, that doesn't mean she can't jump up and down and wave her hands and scream "LOOK AT MEEEEEEEEEEEEEEE!" to get us all hot and bothered and cockteased at the thought of all the wonderful new ways she will inspire us to make fun of her.

The real question, though, is whether Palin will pretend she is willing to lose an election as a Republican or as a Freedomican.

Former GOP vice presidential nominee Sarah Palin floated the idea of creating a third party for conservatives if the mainstream Republican Party continues to “abandon” them.

Answering a question from Twitter on Fox News on whether she’d be open to creating a “Freedom Party” with conservative radio host Mark Levin, she suggested such an option was feasible.

Hey, that's just how the founders got their start too! They quit their jobs, got fired by Fox, got rehired by Fox, then hooked up with some Rush Limbaugh wannabe radio jerk, and voila! MERICA!

We are already quite giddy at the prospect of her announcement that she has decided not to seek office after checking out on Conservapedia what the heck senators do all day, and arglebargle word salad something about dead fish and many other butchered metaphors she will delicately pluck from her regularly jogged-but-don't-look-at-it-because-that's-sexist-but-check-it-out! ass. Also. Too.