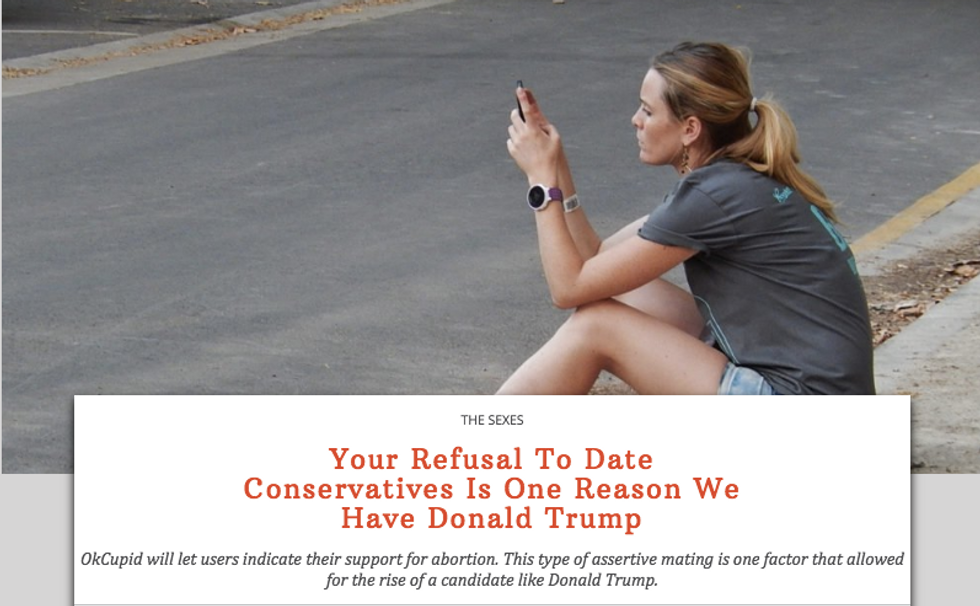 How is the Left to blame for Trump this week? Well, according to an especially charming article up at the Federalist, it is because we are virtue-signaling jerks who refuse to date conservatives.

In the article, which is literally titled "Your Refusal To Date Conservatives Is One Reason We Have Donald Trump," contributor Jerrod Laber begins by railing against a new OK Cupid feature that allows users to note their support for Planned Parenthood.

The popular dating website OkCupid announced Wednesday that it would make the online dating scene a little easier for progressives who can’t risk interacting with someone with whom they disagree (imagine the horror!). They announced a partnership with Planned Parenthood that allows site users to put a badge on their profile signifying support for the nation’s largest abortion provider, much the way Facebook becomes saturated with similar kinds of profile pictures during the newest disaster.

Yeah, I'm gonna say that support for Planned Parenthood is actually a pretty darned important factor for some of us when choosing someone to date. Why? Because in this case, the political is very, very personal. Like, extremely personal. I think we can safely assume that the kind of relationships most people are seeking on OKCupid are ones that would -- at least eventually -- involve sex.

Believing that I should not have reproductive rights is not analogous to having another kind of terrible opinion that does not personally affect me in a serious way. It's not like "liking candy corn" or something. It means that if this person and I were to have sex, and I should get pregnant by accident and want an abortion, he would not be supportive my decision to have one. That is a big freaking deal. And sure, you can bet your ass I'd have it anyway, but why would I purposely choose a partner who would want to deny me that choice? Ew. No thanks.

It’s hard to not see this as a reaction to the rise of President Trump, as Planned Parenthood has long been a political football tossed back and forth between left and right, although dating sites have never made such an overt venture into politics. But, in our current bizarre world of politics, this represents a widening chasm between those who are most politically active, causing people to see an opposing viewpoint as an all-out assault on their personhood. The irony is that the type of assortative mating OkCupid is encouraging is one factor that allowed for the rise of a candidate like Trump.

Excuse me, how is it not an assault on my personhood?

As a white man, Jerrod Laber has the luxury of politics not affecting his personhood. He can watch it like a football game, choose whatever side and probably only ever be personally affected by a tax increase or decrease here or there. In fact, it is quite possible that the only way politics affects his day-to-day life is liberal women not wanting to fuck him.

However! If you're a woman, a black person, an immigrant, a non-Christian, a gay person, a trans person, disabled -- your actual life is affected by politics. So when someone voted for Donald Trump, or, really, voted for any Republican, they actively voted against your personhood. They actively voted to hurt you, either because they wanted to, or because they did not care if you were hurt. While I may not be all of those things, I care about those who are -- and thus is it time for the eternal wisdom of The Spice Girls: "If you wanna be my lover, you gotta get with my friends."

I also consider empathy a pretty important trait in someone whom I am dating. Weird, I know.

This outlook, by the way, is why all those angry white men are always crying about "identity politics." Politics doesn't affect their daily lives in the way it does ours, and they're annoyed about being held accountable for that. They want "thinking trans people aren't real" to carry the same emotional weight as "liking candy corn" -- because that is about how much laws discriminating against trans people affect them personally. They want it to be a football game for everyone, and they are annoyed that it is not.

Laber then goes on to -- I swear to god -- quote Charles "Black People Just Naturally Have Lower IQs" Murray about the deleterious effects of "assortative mating" -- the tendency of people to want to pair with people who are like them.

People have always engaged in assortative mating of some kind or another, but as social scientist Charles Murray explains in his book “Coming Apart: The State of White America, 1960–2010,” there was a shift to a particular type of mating in the ‘60s which continues through the present day.

As cognitive ability became the most valued aspect of human capital––and the biggest predictive indicator for professional success––people began marrying others with similar intellect. Ivy League graduates marry other Ivy League graduates, and their kids do the same, and so on and so forth, causing severe economic stratification between what Murray calls the “New Upper Class” and “New Lower Class.”

According to Laber, the fact that this occurred during a time of increased political polarization has meant that people who are the most politically active tend to want to date people who share their views. Weird, I know. Probably some side effect of giving women the vote!

Assortative mating serves to intensify this polarization. It amplifies an already significant ingroup-outgroup mentality around contentious social issues. Social and cultural issues create severe disagreement because they trigger the emotional part of the brain: the disagreement challenges a core part of group identity. This is exactly the type of schism that an arrogant demagogue like Trump exploits.

This is a really fancy way of suggesting that the only reason any of us believe what we believe is because we are attached to some kind of "group identity." Like we're Shriners, but instead of wearing hats and driving tiny cars in parades, we believe black people when they tell us racism exists and is a problem.

How could this schism be repaired? Obviously it is only by fucking more conservatives.

It is really hard to not see this whole thing as a very public beg for liberal women to fuck Jerrod Laber.

In a less polarized environment, that schtick might be seen for the nonsense that it is. But in a world of ignorant voters and social stratification––in which progressives who live in wealthy ZIP codes and small-town conservatives share a mutual disdain for one another––you get stratification that populist blowhards can exploit. Humans naturally form groups, but when rampant partisanship is the foundation upon which the group lies, extreme politicians are those most likely to win their sympathy.

If a progressive doesn’t want to date a conservative and vice versa, that’s perfectly fine. Everyone has deal-breakers. But as a political protest, this form of virtue-signaling is counterproductive in the long run.

I could write a whole separate post on just the sheer stupidity of these final two paragraphs. Especially given the fact that the whole "economic anxiety" thing is a whole lot of bullshit, given that Trump voters were economically better off than those who voted for Clinton.

However, the important thing to note here is that not wanting to date conservatives or Trump voters is so far from "virtue signaling" as to be ridiculous. No one is putting on a show here, or disingenuously trying to prove what a good person they are. I wouldn't date a conservative for the same reason I wouldn't date someone who was rude to servers -- because I do not want to date someone who is shitty to other people.

What even, I have to ask, would the benefit of this even be? I'm supposed to date a conservative who thinks I don't deserve reproductive rights, doesn't think my friends deserve to not be discriminated against, doesn't think poor people deserve food or health care, quite possibly spends his spare time trolling said people on the internet, and probably treats me like shit due to a complete lack of empathy... all for what? So that instead of voting for Donald Trump, he votes for another Republican who manages to be a lot classier about how terrible he is?

Do I literally have to fuck someone in order to force them to see me as a human being? Is that what you are saying, Jerrod?

Wonkette is ad-free and not idiotic. Please help us stay that way as long as possible.