Idiots Have Some 'Thoughts' On That Washington State 'Bridge' 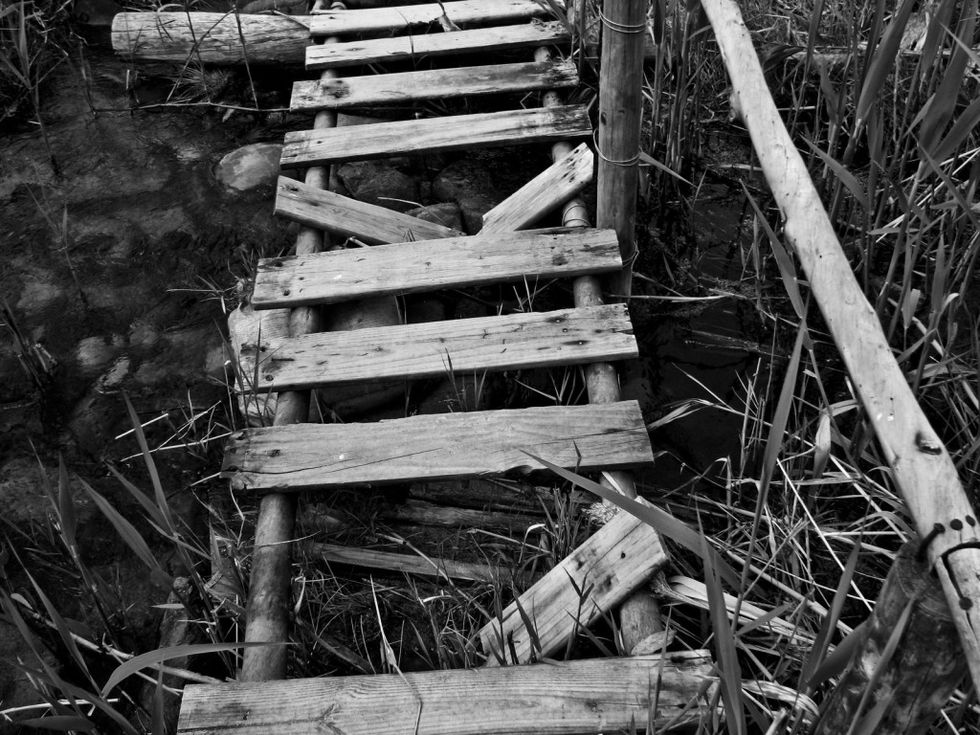 How many bridges must a man drive off before we call him a man? None, because he is just going to sit there in the water and wait to get"rescued" by the nanny state government instead of pulling himself up by his bootstraps, out of a river, which it is his own fault he fell into, because "takers." Like, YOU DIDN'T BUILD THAT! Or something.

Oh hahaha, you think we are joking. Surely you know us better than that!

Here is Media Matters, listening to this Tea Party Radio joker, "Tony Katz," as if, so we don't have to:

On the Washington bridge collapse, Katz claimed that some uninjured victims refused to make the "easy" swim from their vehicles to the shore of the Skagit River:

KATZ: Well one of the guys tells a story about how his shoulder separated, like his shoulder popped out. And his wife was next to him. He popped his own shoulder into place and then got his wife to get out. Now that's a guy fully actualized and knowing that he has to live. Where this thing dropped seemed to me not to be very far, I mean easy get over to the banks where you can get onto dry land. Some of them waited on their cars for an hour for help to arrive.

What has happened in our entire evolution of the past 30 years that we've gone from guys who were standing on the street jumping into ice water to save a woman and here we have people who are 25 feet from shore, if they weren't injured, couldn't make that swim, or ten people couldn't create a human chain. Or it took an hour to get some kind of boat.

Beyond the questionable commentary that there is an attitude in the United States where people are unwilling to try to save their own lives in the face of disaster, Katz and Edwards left out key details from reports on the bridge collapse[.]

According to news reports, all three individuals who were traveling along the Interstate 5 bridge when it collapsed sustained injuries. Furthermore, there are good reasons why no one attempted to swim to shore. At the point where the bridge collapsed, the Skagit River was 18 feet deep with a water temperature of 46 degrees. Far from an "easy" swim to safety, the water was reportedly filled with "tangled bridge wreckage," according to local NBC affiliate KTVZ.

What a bunch of fucking pussies! If the NRA Radio dude had been there, he would have Stood His Ground on that motherfucking nanny state "bridge" and shot a whole bunch of bullets at the water until they formed a metal walkway of bullets, like what Magneto does in The X-Files!

Then there is this other dude, but unlike the rad guy on the NRA's Totally Sane Radio Hour for Self-Sufficient Gentlemen, he is actually A Elected Official! Let us see his Thoughts on what kind of things government is good for, like maybe Promoting the Common Welfare or some dumb bullshit like that:

I agree with you that we must maintain our infrastructure to assure it remains safe, but let’s not confuse this incident or try to use it to leverage more tax dollars when the cause of this collapse had nothing to do with the availability of tax dollars.

As we pointed out in our Wonksplainer, we don't care if the bridge fell because a truck rammed it. A bridge should not fall unless that truck is loaded with TERRORISM.

And as The Stranger pointed out while laughing at poor Ed Honeycutt or whoever, 92 PERCENT OF A BRIDGE REMAINING STANDING IS NOTHING TO BRAG ABOUT. In fact, you can't even really call it a "bridge."

But then, The Stranger would say that, as they are a bunch of Commie Nazi fags who just looooove to make war on jerb creatorz, by asking them to pay taxes, to pay for commie fag stuff like schools and bridges, even though that just coddles American men into not learning how to swim.