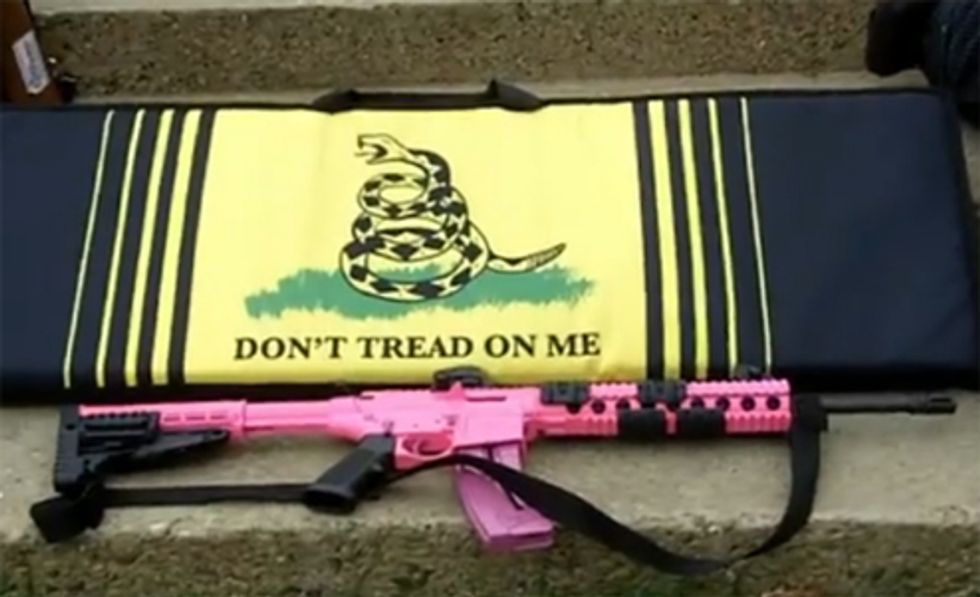 The dramatis personae includes Rudy, your narrator, his wife, "Baby," and a bearded gentleman who goes by "The Texas Deacon," although he was recently promoted to "The American Deacon" in some farcical aquatic ceremony. We thought that the rifle carried by the Texas/American Deacon might be a Mannlicher-Carcano, which would be a nice touch given the location, but the still at the beginning of the video looks like it has a different stock.

Regardless of whether these fine patriots are waving around the weapon that last killed a sitting president, by golly, these good patriotic Christian Americans are not gonna take it anymore. They're distributing business cards -- courtesy of the crazy Atlah church in Harlem -- explaining that Barack Obama isn't really American, and therefore not even President, as well as other cards about how Jesus wants you to have a gun and also the Second Amendment protects all the others, which is their second favorite phrase after "we're not going to give up our guns no matter what."

Somehow, Rudy gets onto a tangent about how he's "just sick and tired" of all these terrible foreigners who come here who don't even know what American freedom is about -- for instance, he says in shocked amazement, did you know that they don't even celebrate the 4th of July in foreign countries?

A little later, after more ranting about England and Australia's designs on our guns, Rudy and Baby and the Texas Deacon join up with some Jesus people preaching about how America has become a "sexual charged society" -- which seems a good moment (8:30) for Rudy to insert one more still photo of his special Gadsden flag rifle case and Baby's pink AR-15. You figure that one out. Also, Rudy exclaims "Amen" to the preacher's suggestion that JFK probably went to hell because he wasn't saved. So: Guns, excellent; lust, bad. Hey, that actually sounds strangely familiar!

We hope you have found this video a useful explanation of why the Second Amendment keeps America free, and we will not give up our guns no matter what.

*except, of course, for the dirty foreigners who don't even celebrate the 4th of July.

Follow Doktor Zoom on Twitter. He may have lost some brain cells while watching that. Please give generously. He is not going to give up his Ponies no matter what.