If Arizona Congressjerk Doesn't Scare Your Kids About Terrorists Nuking Them, Who Will? 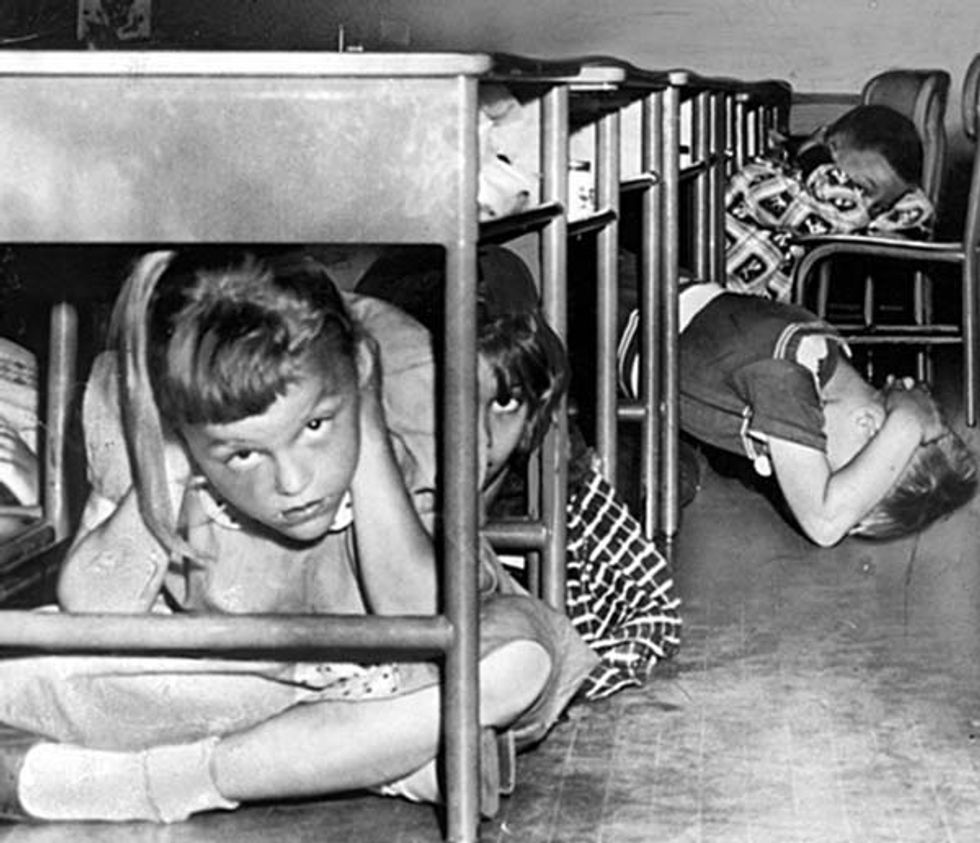 They All Hate Us Anyhow, So Let's Drop The Big One Now

Arizona Congressweasel Matt Salmon dropped by an elementary school last Thursday to teach a group of second and third graders to explain how a bill becomes a law. Except that instead of singing a song about a cheery little Bill who hopes and prays that both chambers of Congress pass him and the president signs him into law, Salmon drifted into a fascinating fugue on what might happen if Barack Obama vetoes a Republican resolution against Obama's Iran Nuclear deal. For some reason, the 7- and 8-year-olds didn't seem to catch all the nuances of parliamentary procedure, and instead quite a few went home worried about suicide bombers under their beds. It's almost as if Ted Cruz's campaign technique of personally frightening little kids is catching fire, as it were.

Parent Scott Campbell told Phoenix station KPHO that Salmon's presentation went in a dark direction when he got to the discussion of the president's veto power:

"The congressman chose to give an example of the current situation in Iran, and made some inappropriate comments about 'Do you know what a nuclear weapon is? Do you know that there are schools that train children your age to be suicide bombers?'" Campbell said.

He and other parents were shocked. He said he had to console his young daughter.

"After school my daughter was very concerned and said to me she actually didn't even know what suicide was and was very afraid," he explained.

Well, you see, that's just what happens when a legislator hasn't thought out his lesson plan. Surely, if Salmon had prepared better, he could have brought in some photos of little kids wearing explosive vests, and perhaps some news photos of the aftermath of a suicide bombing. That surely would have answered the girl's questions.

Not long after the talk, Kristofer Sippel, principal of San Tan Charter School, sent a note home explaining that the teachers had tried to redirect Salmon back toward his discussion of how bills become laws, (at least when the president isn't a power-mad Muslim-lover bent on national suicide):

I interjected that we had time for a few questions in hops [sic] to divert the conversation. At this point, the questions changed to a different topic; however, after a few questions the topic again turned to ISIS and terrorists; at that point, Ms. Kisler did a great job and interrupted the Q & A to thank the Congressman for coming to the classroom.

Some of your kiddos may have come home yesterday to share their experience with you; this may have left you uneasy, if your family was troubled with this discussion, I encourage you to please reach out to the Congressman’s office to discuss this with him and/or his staff.

When asked for comment, Salmon's office initially hinted that, in a world where the president is bent on giving away our national sovereignty to Muslim radicals, Rep. Salmon's comments were far from out of line, according to spokesman Tristan Daedalus (just back from a walking tour of Dublin):

“The content o‎f those remarks wasn’t anything beyond what children could expect to see or hear on any timely TV or radio newscast,” Daedalus said. “It was never Congressman Salmon’s intention to offend any parents present, so our office was happy to meet with them and discuss their concerns.”

Salmon also called some of the parents, including Campbell, to apologize for upsetting the children. Campbell said that while he still disagrees with Salmon's politics, he did appreciate the gesture, which he described as "genuine and welcome."

As of press time, Donald Trump had not yet called Salmon a pathetic weak little baby for apologizing just because he made some liberal's kid cry, nor had Trump yet explained that in the same situation, he'd have told the girl, "You want to see tears? Think how hard you'll be crying when another kid your age detonates his suicide vest after crossing the border -- which is wide open, no control down there at all -- and comes to your school and blows himself up. If your tear ducts aren't burned out of your eyes by the blast. We are living in dangerous times little girl, and our leaders are weak and useless. Tell your daddy to wake up and vote for me so I can make America great again."