If He's Going Down, Paul Manafort Will Take Half Of DC Down With Him 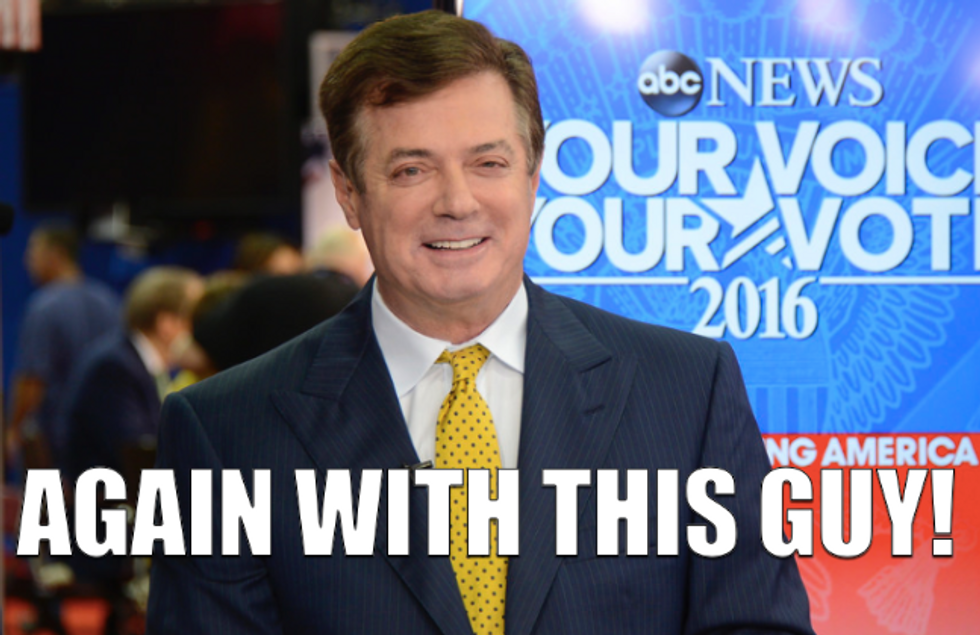 Guess which fancypants lawfirm has the Manafort flu today! Why it is Skadden, Arps enjoying a front page story in the New York Times and a nice chat with the FBI, and perhaps Robert Mueller and his band of scary prosecutors as well. Is it true that all publicity is good publicity?

Our story begins in 2011, in the far off land of Ukraine where there was a beautiful princess known as Yuliya Tymoshenko. Mrs. Tymoshenko led a political party that looked to the West and hoped that Ukraine would one day join the European Union.

At that time, there was an evil force in the land. He was known as Victor Yanukovich, and he headed a pro-Russian political party that wished to ally Ukraine with Russia and manly Tsar Vladimir Putin.

Now you might expect Mrs. Tymoshenko to win in a rout because of her far superior hairstyle. But in fact, evil Yanukovich trumped up charges against her and threw her in jail. (Yes, we are aware Yuliya Tymoshenko is only "innocent" when graded on the Caucasus Curve. BUT STILL.)

At this point, noted Ukrainian rentboy Paul Manafort went shopping for a respectable American law firm to do an "inquiry" proving that jailing Mrs. Tymoshenko was legitimate. He settled on Skadden, where former Obama White House counsel Gregory Craig agreed to lead the Ukrainian project. The rest of the world condemned Yanukovich and his assault on democracy. But the 2012 Skadden Report concluded that,

“Tymoshenko has not provided clear and specific evidence of political motivation that would be sufficient to overturn her conviction under American standards.”

Rather, the firm’s statement said that Ms. Tymoshenko “was denied basic rights under Western legal standards,” was “improperly incarcerated during the trial” and that “in the West, she would receive a new trial.”

Now, we at Wonkette are no babes in the woods -- despite our girlish figure and smooth complexion. We understand that law firms aren't ethically obliged to only represent good guys. And taking money from Paul Manafort to "investigate" the politics of another country, while not technically legal work, is not uncommon for large, multi-national law firms.

If your footprint is a millimeter away from a giant shitpile, and you have no shit on your shoes, it shows that you knew damn well where the pile was and you very carefully picked your way around it. And the very deliberate wording of the Skadden Report about Mrs. Tymoshenko's trial and Mr. Yanukovich's culpability makes it clear that Skadden knew damn well where the corrupt, anti-democratic pile of shit was. They took the million dollars, and they walked around the pile.

The day after its release, Victoria Nuland, a State Department official at the time, called it “incomplete,” at a department press briefing, saying that it “doesn’t give an accurate picture.” She said the State Department was concerned that “Skadden Arps lawyers were obviously not going to find political motivation if they weren’t looking for it.”

In a recent interview, John E. Herbst, a former United States ambassador to Ukraine, went further. He said that Skadden “should have been ashamed” of the report, calling it “a nasty piece of work.”

Now back in 2011, Skadden's risk management department evaluated the Ukrainian client and Paul Manafort's Shady Lobbying Shop for Dictators and Oligarchs (or whatever it's called). They calculated the risk that the project would go sideways, resulting in bad publicity for the firm, or worse. And they decided that the potential downside was worth the $1.1 million payoff. They also knew, or should have known that Manafort was not registered as a Foreign Agent under the Foreign Agent Registration Act; he has recently filed paperwork to register retroactively. So, we are not crying sad tears for Skadden because they got caught doing something that lots of other people were doing. You pays your money, you takes your chances.

Similarly, we are not going to draw any conclusions from the fact that Skadden hired Paul Manafort's daughter, lawyer Andrea Shand, two months after the report was released in 2012. She seems eminently qualified, and it's entirely plausible that she would have joined the firm even if her father wasn't a client. But more on that later.

In February of 2014, Victor Yanukovich was overthrown by a popular uprising and fled eastward into Vladimir Putin's warm embrace. Yuliya Tymoshenko was released from jail, and her conviction was vacated. Which is NICETIMES for Ukraine. But maybe not so nicetimes for Skadden, since their Ukrainian cashcow was no more.

In June, Skadden refunded $567,000 to the Ukrainian government — about half of the total it was said to have been paid by Mr. Yanukovych’s government. The firm suggested in a statement that it returned the cash because the money had been placed “in escrow for future work” that never took place.

That would be June of 2017. FIVE FULL YEARS after Skadden completed that very careful report on the Tymoshenko prosecution. And just a month after Robert Mueller was appointed to look into the Trump campaign's myriad Russian entanglements. THAT'S A MIGHTY BIG COINCIDENCE!

Now we are not a practicing lawyer at the moment, but we have some questions.

Are you guys really going to blame this one on the bookkeeper? Is Skadden's position that you just held half a million dollars on the books in your escrow account for five years? Ooopsie poopsie!

Or is your position that you still thought Victor Yanukovich was your client? Because he was overthrown in February of 2014, three whole years ago. So you were still sitting on a big chunk of money three years later. That's three years after the Ukrainian government approached the US Justice Department about getting a refund of money that the former president stole and used to pay for illegal lobbying efforts in the US. Gosh, we hope there's no record of the Ukrainian government asking you for that money in 2014. That would be awkward!

Or did you think that Manafort was your real client? Not likely, since he wouldn't have made himself personally liable for the $1.1 million fee. But, for the sake of argument. Did you lose his phone number in the intervening five years? Because his daughter, who works in your office, probably knows how to get in touch with him! Don't worry, she knows all about it already. Business Insider published excerpts of her hacked texts.

In a series of texts reviewed by Business Insider that appear to have been sent by Andrea to her sister, Jessica, in March 2015, Andrea said their father had “no moral or legal compass.”

“Don’t fool yourself,” Andrea wrote to her sister, according to the texts. “That money we have is blood money.”

“You know he has killed people in Ukraine? Knowingly,” she continued, according to the reviewed texts. “As a tactic to outrage the world and get focus on Ukraine. Remember when there were all those deaths taking place. A while back. About a year ago. Revolts and what not. Do you know whose strategy that was to cause that, to send those people out and get them slaughtered.”

But maybe you figured it was free money, since Yanukovich was gone, and no one would come looking for it?

We're not sure which of these explanations you Skadden guys are going for. In any case, not a good look fellas! But we wish you luck in your conversations with the Justice Department.

More recently, Ukraine’s prosecutor general, Yuriy Lutsenko, acknowledged in written responses to The New York Times that his office had begun working with the Justice Department to investigate the payments from the Ukrainian Justice Ministry to Skadden.

Asked whether Ukrainian prosecutors are assisting in Mr. Mueller’s investigation, Mr. Lutsenko’s office was coy. In a statement, it said that it had not publicly disclosed any such cooperation, but it also noted that not all international judicial cooperation can be disclosed.