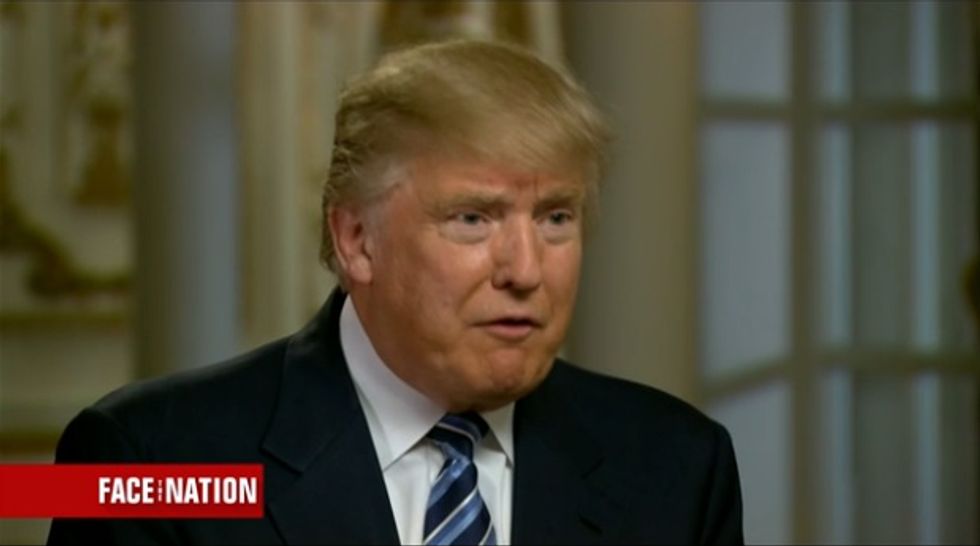 [contextly_sidebar id="sZvWUFSklZSNQg2HAnLU0IZp65xMdNjc"]Donald Trump loves him some torture, so much. Whenever he can, he explains how he'd bring back waterboarding -- and more! -- and maybe also kill some terrorists' families, because you gotta be tough with these animals. In Thursday's debate, he said he's not worried some pansy-ass American officers might not follow orders to do war crimes, because he's a great leader, the best leader you can find, not weak at all, and when he gives orders, they'll be followed. But he also knows America is a nation of laws, so on Friday he seemed to back off, just a little, and said sure, he'd follow American and international law, and would never "order a military officer to disobey the law," so no big whoop. Ah, but by the weekend, he'd resolved the dilemma: All we have to do is "expand the laws" to allow America to torture as much as we want, and then we'll win.

[contextly_sidebar id="ILs3qBWcHncrKUIgYFoCqOzQFTuOh0PH"]Trump first floated the idea at his Saturday night press conference/victory rally, with lots of flags behind him so you know it's good for America. Sunday, he explained in detail on CBS's "Face the Nation" how being bound by old-fashioned restraints like "human rights" and "international law" makes us weak against ISIS, telling host John Dickerson:

We have an enemy in the Middle East that's chopping off heads and drowning people in massive steel cages...We have an enemy that doesn't play by the laws. You could say laws, and they're laughing. They're laughing at us right now. I would like to strengthen the laws so that we can better compete.

Do you want to be laughed at, America? We can't have terrorists laughing at us simply because we cling to wimpy things like the Geneva Conventions and our own laws. So let's make some new ones that'll let us compete in the free market of torture.

Trump didn't bother explaining how waterboarding -- and much more -- would actually defeat ISIS. It just would, OK? Never mind that to date, we've captured exactly one ISIS operative (we're weak that way). For that matter, he didn't even suggest torture would have any value in gathering intelligence -- which it doesn't -- he simply seems to think it's a way to win wars, all in itself. Perhaps Dickerson could have pointed out ISIS uses horrific beheadings and other executions as a means of terrorizing the population in areas they've taken over, not as a battlefield strategy or to extract information? Not that Trump would care, but at least to get it on the record.

Trump went on to claim a really good strong general like George S. Patton or Douglas MacArthur "woulda had ISIS down in about three days," although we should probably note here that neither of those generals employed waterboarding on the battlefield, preferring tanks and infantry. We might also point out we're not in World War II and maybe even that the military campaigns pursued by both of those guys took rather longer than three days. On the other hand, Donald Trump can at least name two dead generals he likes, so good for him.

Dickerson tried to suggest that officially sanctioning torture would simply make American troops more likely to be subjected to torture themselves if captured, which is the whole idea behind those Geneva Conventions which make the bad guys laugh at us. Not a problem, said Trump:

They're doing that anyway. They're killing our soldiers when they capture 'em. I mean, they're doing that anyway. Now, if that were the case -- in other words, we won't do it and you don't do it, but we're not playing by those rules. What, did somebody tell ISIS, "Look, we're going to treat your guys well; will you please do us a favor and treat our guys well?" They don't do that. We're not playing by -- we are playing by rules but they have no rules. It's very hard to win when that's the case.

If you want to bother with mere reality, ISIS has not, in fact, actually captured any American soldiers. Not one. They've captured and horrifically murdered journalists and aid workers, but no soldiers. For that matter, the only American soldier held as a prisoner of war by terrorists was Bowe Bergdahl, who Trump wishes we'd shot. He's big on shooting people, Trump is. Possibly to keep our troops in line.

Ever the optimist, Dickerson tried one last time, asking, "Isn't that what separates us from the savages, rules?" Trump wasn't having any of that namby-pamby weakness, not for a second:

Trump: No, we have to beat the savages.

Dickerson: And therefore throw all the rules out?

Trump: We have to beat the savages.

Dickerson: By being savages?

Trump: Well, you have to play the game the way they're playing the game. You're not gonna win if we're soft and they're, they have no rules. Now, I want to stay within the laws, I want to do all of that, but I think we have to increase the laws, because the laws are not working, obviously. All you have to do is take a look at what's going on. And they're getting worse. They're chopping, chopping, chopping, and we're worried about waterboarding. I just think it's -- I think our priorities are mixed up.

We suppose maybe Trump might have a point somewhere other than at the top of his white hood if he could at least argue there's some utility to gratuitous torture, but he's not even interested in whether it works. He just knows it will, and all we have to do to save American values is burn American values to the ground. It's gonna feel so good.