If You Missed Lady Gaga's Political Message, You're Probably A Dumb Trump Supporter 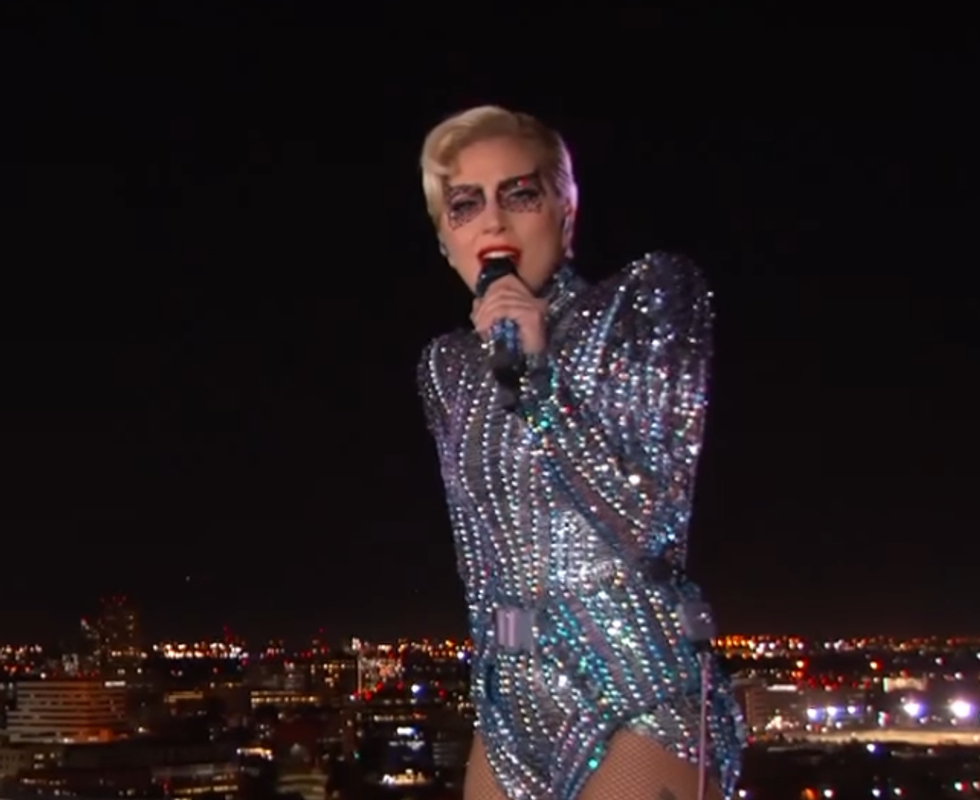 Let's get a quick point of personal opinion out of the way: Lady Gaga is no Beyoncé. So let's talk about Lady Gaga's Super Bowl performance!

Alex Jones, a normal journalist, let us all know that Gaga's halftime show was going to be a satanic ritual, so we were very excited to see how that might play out. Instead, she did a performance that left many on the right thinking that naked gay-loving liberal singer lady did a very nice job, and left some on the left disappointed that she didn't take her opportunity to Make It Political. But in reality, it was very political, in good, subversive ways that went straight over the average Trump supporter's dumb little head.

Firstly, there was the patriotic beginning, which started with "God Bless America," moved into "This Land Is Your Land," and ended with the Pledge of Allegiance. Leaving aside how liberals pat themselves on the back (and quite rightly!) for knowing that "This Land Is Your Land" is a subversive political tune conservatives shouldn't be allowed to sing, we are at a very unique political time where the songs and rituals of patriotism are essentially a joke when sung by people who voted for Donald Trump. You can't support Pussgrab Hitler's stab at autocracy and sing "The Star Spangled Banner" with a straight face, unless you want the majority of Americans to laugh at you.

Liberals often scoff at people who drape themselves in the flag and engage in displays of cheap patriotism. And to be sure, when people waved flags when Dubya Bush used 9/11 as a pretense for invading a completely unrelated country, and when Tea Partiers covered themselves in stars and stripes because they couldn't handle a black president, it was indeed lame and meaningless. This is different. For Lady Gaga to begin her performance the way she did, with Vice President Mike Pence in attendance, is a subtle message of, "Oh no, motherfucker, you and Steve Bannon's Russian puppet do not get these songs anymore, you don't get to wave that flag, because this country is OURS. ALL OF OURS."

And speaking of Pence, who hates the gays so much and is definitely not a deeply closeted gay man! It wasn't exactly a surprise that Lady Gaga performed "Born This Way," as it is one of her most gi-normous hits. But it's a song that in a space of a few years has become a part of LGBT culture, with its message of radical inclusion for the G's and the BLT's and all the letters that haven't been invented yet. The song actually includes the words, "No matter gay, straight, or bi, lesbian, transgender life," and Gaga chose specifically to sing that part at the Super Bowl, for everyone to see.

If you know gays on Facebook, you were subjected yesterday to all the statuses about, "I heard a rumor that there's a football game during the Lady Gaga concert LOLOL I am so original for making this joke right now!" But this year, it was kind of true! Lady Gaga spent her halftime show sending the message that this land is not Trump's land, it is your land and my land, no matter how gay you are, and she did it with Mike Pence watching.

So. We'd say that was pretty political!

Anyway, also she was kind of pitchy, but then again she always is, so meh. Like we said, she is no Beyoncé.