If You Think Donald Trump Said Megyn Kelly Was Bleeding From Her Hoo-Ha, You're A Nazi 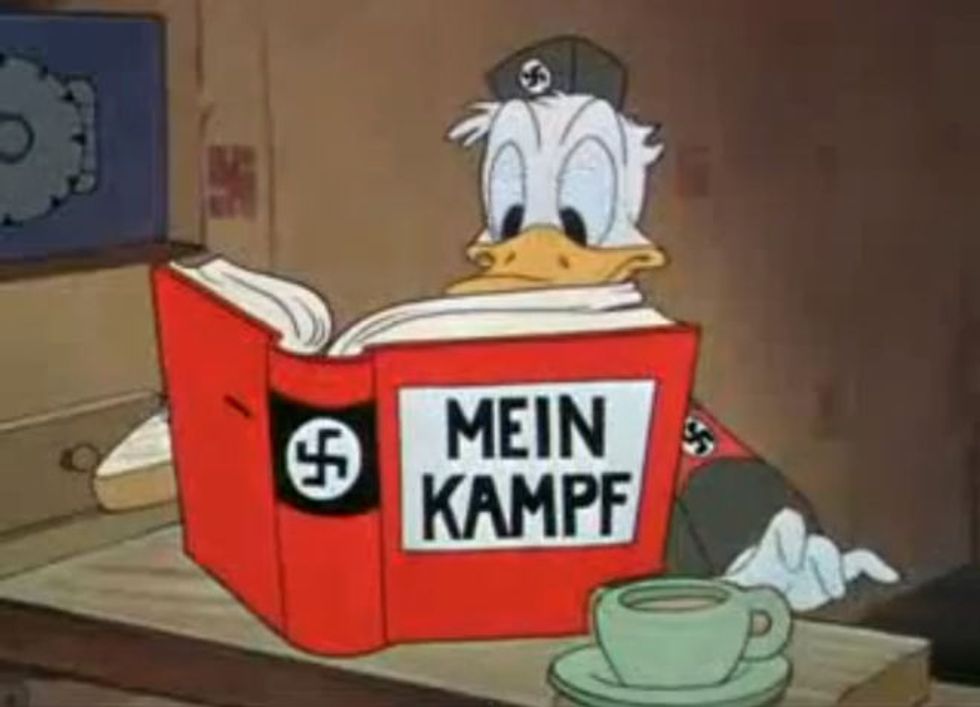 OK, folks, we can all go home now, because we have reached the penultimate* plu-perfect** fucktasm of stupid on Aunt Flo-gate. You know, the Very Serious Matter of whether Fox News word-speaker Megyn Kelly was a girl dick to Donald Trump during the GOP debate, for asking him why he's such a sexist boy dick, because her va-jay-jay was on the rag; or whether she is just a big dumb stupid, and only a pervert would think Trump was talking about her lady whatsit when he said she was "bleeding from her wherever" because he obviously meant her NOSE, you sick losers; or whether she was asking inappropriate questions and should be YOU'RE FIRED! from Fox and apologize to Trump; or whether it's time for us to start drinking.

Most reasonable people, and also Republicans even, agree that Trump's "criticism" (yeah, we are really taking poetic license with that word) of Kelly was "mean" and "inappropriate" and "rude," and blatantly, patently, inarguably, indisputably, prima facie-ly sexist. But fuck all that noise, because some dude named Jeffrey Lord -- a new contributor to CNN, apparently -- fisted his keyboard to produce a most excellent series of words to prove how wrong we all are:

What has followed has been 48-hours of the most disgusting pieces of political analyses I have ever heard in my life. A plu-perfect example of the insight of Hitler’s Minister of Propaganda Joseph Goebbels: “If you tell a lie big enough and keep repeating it, people will eventually come to believe it.” There was not a word said, not a hint, not a suggestion, that Donald Trump ever said Megyn Kelly asked her lead question of him because she was menstruating. Say again… not… a… word. Not one. This is — there is no other word for it — a Goebbels-esque lie.

First of all, we're not even going to dignify the Nazi comparison with a response beyond GO FUCK YOURSELF, PAL, because dear God, we discussed Goebbels just the other day, and frankly, we need a goddamned break from telling you nose-pickers to stop saying stuff you don't like is just like the goddamned Nazis.

Moving on! Nobody says "plu-perfect" to mean extra super-duper perfect, unless they are some kind of pretentious butthole. Ugh.

Also, Donald Trump did not in fact say the exact precise words "Megyn Kelly must have been menstruating," but even Erick "Son of Erick" Erickson jerked off his two brain cells and ejaculated the obvious conclusion that when Trump said there was blood coming out of her "wherever," he meant VAGINA. You know, her sex hole? Her ladyparts? Her down-theres? Her cunt, twat, pussy, clam, muff, snatch. Her Georgia O'Keefe. Whatever euphemism you wanna stick in there, it is really not difficult to suss out what Trump meant when he suggested and hinted that Megyn Kelly was a bitch to him, because she was on her period.

But here is where CNN's new political commentator (great hire, CNN!) really puts the rest of us to shame, because see, he is OUTRAGED! at all the Nazis out there who are being so sexist to Megyn Kelly, by unfairly interpreting Trump's sexist words about Megyn Kelly as if they are sexist, when Trump has also insulted men, proving that he is an equal-opportunity asshole, so who's the real sexist now, huh?

In their zeal to get Donald Trump, both Erickson and the Republican Establishment have laid bare a streak of appallingly condescending sexism towards Fox anchor Megyn Kelly. Ms. Kelly — in my opinion a terrific journalist (although yes, I think Kelly’s initial question to Trump was a decided “gotcha”) — has drawn the wrath of Donald Trump. So too did Trump attack Kelly’s colleagues Chris Wallace (the latter in the same “blood coming out of his eyes” words he used to attack Kelly) and Bret Baier. So too has he taken off on pollster Frank Luntz.

Wait, it gets even better:

And how did Erickson and the GOP Establishment respond? The only one of the above people — say again the only one — that Erickson and the Establishment rushed to defend was… the woman. Apparently it was OK for the men to be attacked but, hey, Wallace, Baier, and Luntz are just guys. They can take it. But the little lady? Well, by God everybody knows women really aren’t a man’s equal. Poor little Miss Megyn Kelly needs these big strong men to defend her honor.

To be blunt. What a bunch of condescending sexist baloney.

So this dude is rushing to defend the honor of Miz Kelly against those sexist Republican dudes who rushed to defend the honor of Miz Kelly, which is sexist when they do it, but not sexist when Lord does the exact same thing, somehow. Lord is quite certain that Erickson, as well as all the "me too!" Republicans who mildly condemned Trump's statement, owe some apologies, mister, not that they will pay up because, you know, sexists. Or Nazis. Or both maybe?

Wait, LOL, say that again, would you please, Mr. Lord?

See? You can't top that. Don't even bother trying. And yes, it is definitely time to start drinking now.

*Yes, we know that "penultimate" does not mean "The Best." We are not A Idiot.*

**We also know what "plu-perfect" means because, again, not A Idiot.

***Shut up, we say "A Idiot" on purpose because it is official Wonkette house style.