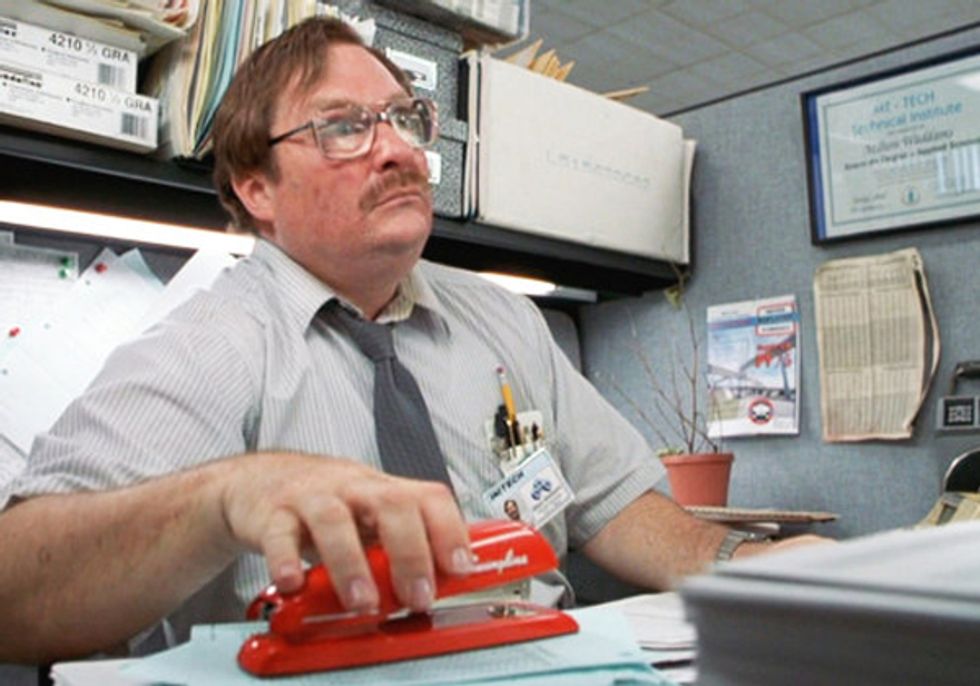 Fact: Most stapler related crimes are arsons, not assaults

Shock and disbelief were the prevailing reactions in the west side of Chicago after Jessica Soto, daughter of state Rep. Cynthia Soto, was arrested and charged Friday with assault after a March 6 incident in which she allegedly just started totally whaling on this one guy with a bottle and a freakin' staple gun, man. And the really fucked up part is that the guy she beat up was running against her mom in the primary like a week later, if you can freakin' believe it.

Robert Zwolinsky, a candidate running against Cynthia Soto, said he was heading home with his girlfriend, driving past his campaign office that evening, when they saw a man and woman outside the office with campaign signs for Soto.

"I went up to them and said 'Come on guys, what are you doing? This is my office,' " Zwolinski told DNAinfo Monday. "Then the guy pushes his forearm against me and the woman just starts screaming 'This isn't your territory' or something like that.

"Suddenly she pounces on my back and starts scratching and tearing at me, and before I know it all three of us are on the ground," Zwolinski said. "This girl is insane. ...I've never seen so much craziness in a person. She needs to be found and taken off the streets."

According to Zwolinski's girlfriend, who stayed in the car like a sane person would during all this, Jessica Soto also opened the car door and threatened her with the staple gun, too, like some kind of crazy bitch. It's too bad our friend Chad's brother wasn't there, because he totally knows t'ai chi and shit.

Witnesses to the unbelievable ass-kicking got the license number of the vehicle the ass-kickers drove off in and called the cops, leading to the eventual arrest of these total dirtbags Jessica Soto, 26, and her jerkwad boyfriend, Bradley Fichter, 26. Both face charges of "aggravated battery with a deadly weapon, aggravated battery causing great bodily harm and aggravated battery in a public place." Fichter was also charged with a felony count of disorderly conduct for filing a false police report, because if you'd fuck up a guy over campaign signs, it makes sense you'd lie about it to the cops. Fichter went to a police station 90 minutes after he and his girlfriend whaled on the other dude and accused Zwolinski of picking an unprovoked fight with them. Un-fucking-believable.

Zwolinski posted a photo of his injuries the next day to Twitter, complete with a goddamn staple sticking out of his scalp. Here it is, with a warning that it's pretty gnarly. Hope you don't hurl.

Please note the absence of a backwards "S" carved into Zwolinski's cheek. This dude's clearly telling the truth, no bullshit.

Following a bond hearing, Friday, Jessica Soto's attorney, Frank Avila, acted like the whole thing was a big joke or something, calling the charges "way exaggerated" and saying "part of this is sour grapes because he [Zwolinski] lost the election." Which was some pretty smart planning on Zwolinski's part, to get beat up like that a week before the primary, so he could either win on a sympathy vote, or lose and get his opponent's daughter in legal trouble.

Avila questioned the validity of his Zwolinski's claims, implying he's either completely full of it or the world's biggest pussy, maybe both, pointing out that Jessica Soto is 5-foot-2 and "a little bit chubby," so how could a big strong man like Zwolinski have gotten his ass kicked by a sweet little piece like her, no disrespect to her mother of course:

"If he's going around saying a girl beat him up, that's really sad," Avila said. "Maybe it's good that he lost the race if he gets beat up by a little 5'2" girl that's not even strong."

Avila says that the way it really went down is that Zwolinski started it all by tearing down signs for Soto that Jessica and her boyfriend were posting, and what were they going to do, just stand there? Avila also hinted darkly that this Zwolinski guy must have some serious suction for charges to even be brought, if you know what he means.

Zwolinski "should be on trial," Avila said. "He should be in jail."

Avila probably had to be restrained from beating up the filthy liar himself, we'd like to think, but managed to retain what you call a professional demeanor.

This Soto girl -- the daughter, not the mom, who we're sure did her best -- is quite the piece of work herself:

Jessica Soto previously spent 3 months on court supervision after being convicted in a 2011 battery case. She'd been charged three other times with battery and once with aggravated battery but was never convicted in those cases.

After ordering Fischer and Soto be held in lieu of $25,000 bail each, Judge Maria Kuriakos Ciesil said she didn't know what the fuck is wrong with this freakin' country anymore:

"I'm really sad ... by how this whole election period is going," the judge said. "It's an embarrassment to our entire country."

Avila insists this is all a big misunderstanding: the cops got the wrong young lady and Jessica Soto never whaled on no dude with a stapler. "It will come out in court," he promised.

While Soto and Zwolinski are both Democrats, Yr Wonkette will not be one bit surprised if Jessica Soto and Bradley Fichter are offered high level jobs with the Donald Trump campaign, which is always on the lookout for new talent.

[DNAInfo / TPM / DNAInfo again / Borrowings from The Onion fully intentional, get out of here with your shit]