The Illinois Republican Party just can't seem to get a handle on its basket of deplorables. Things looked comically bad when it accidentally nominated a Nazi to run for Congress in the Fifth District, but it's also accidentally nominated a crackpot conspiracy theorist in the 17th. The party is desperate to distance itself from all the freaks flying their flag, so they're denouncing their own candidates, and quietly running write-in campaigns in the event that they accidentally send another wacko to Washington.

Arthur Jones, the actual Nazi running in the Illinois Fifth, ran unopposed in the Republican primary, guaranteeing him a spot on the ballot this November. Since then, he's been (begrudgingly) admonished by national and state party leaders for his well-documented history of anti-semitism and racism. Now Politico reports that Justin Hanson, a former staffer for Missouri Republican Sen. Roy Blunt, has mounted a write-in campaign with the hope of siphoning votes away from Jones.

Despite working for a hardline conservative in the Senate, Hanson is running as an Independent and tells Politico that he "moved to the center" after leaving the Hill.

State party leaders were perfectly willing to let Jones get mercilessly clobbered by incumbent Democratic Rep. Dan Lipinski, so they sat on their collective asses while the deadlines to run alternative candidates came and went. Even after Jones went on CNN in February and talked about his hatred of the "two party, Jew party, queer party system," they did nothing. It's only in the last few weeks that they've been mulling over fielding a write-in candidate, an expensive and ultimately useless move in Chicago's heavily Democratic South suburbs. When Politico called Jones shortly after the ballot deadline in June, he laughed and said, "I snookered them," adding, "I played by the rules, what can I say?"

Since Illinois Republicans are some of the most crooked and feckless political imbeciles, we'll assume that it took them eight months to find someone with balls big enough to punch a fucking Nazi (with votes) as the alternative is even more pathetic.

But things get worse for Illinois Republicans! Wednesday, state party officials had to pull support from 17th District Republican nominee Bill Fawell after they (finally) stumbled across his long history of conspiracy peddling on social media. Like Jones, Fawell ran unopposed for the Republican nomination to run against three-term Democratic incumbent Cheri Bustos.

It's impossible to see how the party leaders missed this guy. By all indications he's been running for office since January of 2017. A campaign video from last September starts with a bootlegged bootleg of Braveheart before he babbles about the death of America, and screams about auditing the Fed as if he were proto-Trump Ron Paul.

Media Matters found that Fawell has spent years parroting Alex Jones conspiracies on Facebook (IN ALL CAPS), from 9/11 and Sandy Hook trutherism to Pizzagate and the Seth Rich garbage. He's one of those people who might say only gay frogs boil in hot water, or that chemtrail possessed child actors are shooting up schools to hide HER EMAILS because he heard it on a podcast. 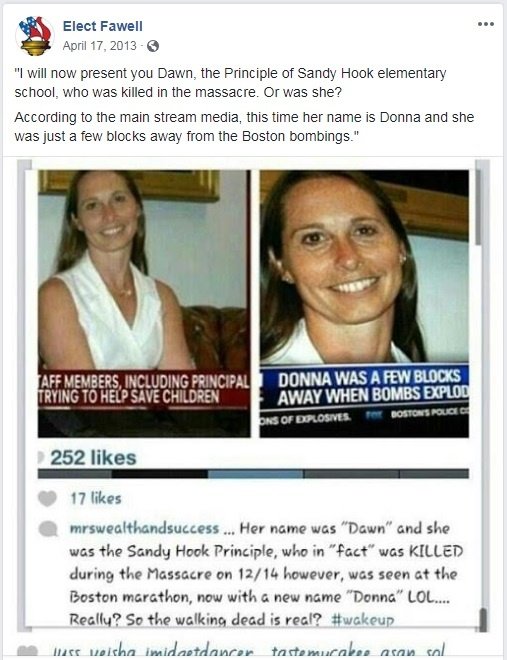 Since these suburban and exurban districts are historically Democratic strongholds, Republicans don't usually bother to run candidates. However Trump just barely swung a few of the counties in these districts in 2016, and he's spent the last two years encouraging Nazis, white supremacists, and conspiracy theorists to slither out from their shanties and sewers and run for offices up and down the ballot. The notion that the Republican Party has become the party of nuts and Nazis is scaring some of their leaders, but their apathy and lust for power has driven them to placate garbage people with dog whistles for decades. While it's nice to see Republicans finally do something about the Illinois Nazi problem, they're not exactly doing much to shut them up and shut them out.

[Politico / Media Matters / The Dispatch-Rock Island Argus]
Wonkette is ad-free and reader-supported, so if you like punching Nazis (with votes), hit the tip jar below, or click here to make a monthly donation!

From Your Site Articles
Related Articles Around the Web
Dominic Gwinn