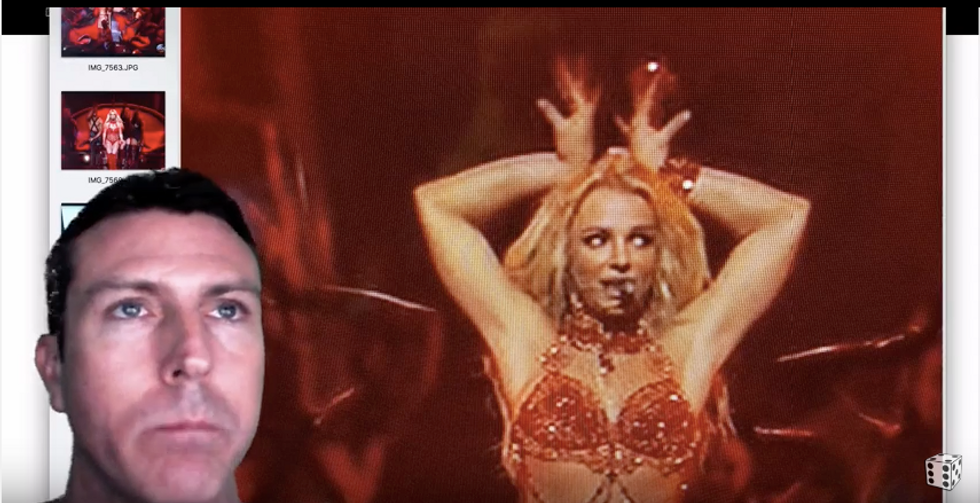 Welcome to your Monday Morning Cringefest! This week we have conspiracy theorist Mark Dice, who has some "thoughts" on last night's Billboard Music Awards, mainly about how they have something to do with the ILLUMINATI. Just like pretty much everything else, ever.

ANYWAY, Britney Spears' performance on the BBMAs was simply RIFE with such symbolism. She did a thing on her head that sure looked like SATAN HORNS to Mark Dice ("proudly proclaiming her allegiance to SATAN and her Illuminati puppet mind control masters"), and then also there were "serpents" involved. Plus she sang "I'm A Slave 4 U," meaning that she is a slave to the Illuminati, because those Illuminati people are literal AF. She did so while dancing on a pole, because the liberals who run the Billboard Music Awards want your daughters to be stripper slaves for the Illuminati. Obviously. I know it's a goal of mine, anyway.

Dice also had a lot to say about Britney's mental health problems -- which he claims, naturally, were a result of some kind of Illuminati witchcraft done to her by her puppet mind control masters. Or something. This shit is not easy to follow.

You know, when you really think about it, it's actually quite amazing that the Illuminati have time left over to control the world and also Britney Spears when they are so busy putting on awards shows and inserting their symbolism into every facet of human life! Not to mention all the time they must spend writing songs that reveal Satanic messages when played backwards.

That seems pretty exhausting. Do you think they have a special department for that stuff or is it something everybody works on collectively? Like, do you need to put in a few years at the "inserting symbolism into musical performances" level before they let you be a full-on puppet mind control master? And do the Illuminati have day jobs, or is this a full-time gig? Do they have a health insurance plan? How does this all work?