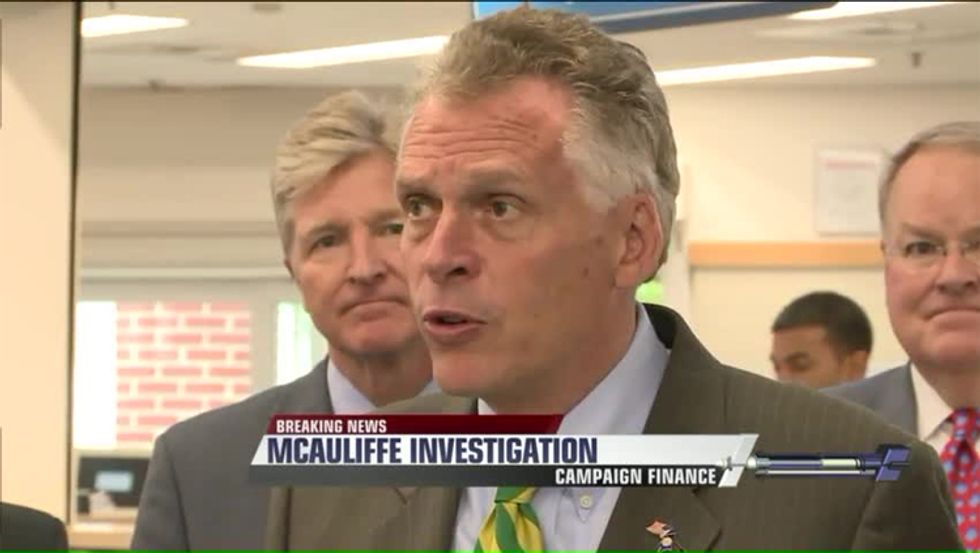 Yes, Virginia, there IS an ethics probe

Virginia Gov. Terry McAuliffe is under investigation by the FBI and the Justice Department's public integrity unit for possible illegal campaign contributions in his 2013 campaign, according to CNN. McAuliffe's office said it was not informed of the investigation, but that the "Governor will certainly cooperate with the government if he is contacted about it," according to a statement by Marc Elias, McAuliffe's attorney. The investigation is looking at $120,000 in donations made to McAuliffe from businesses owned by Chinese billionaire Wang Wenliang, who is a foreign dude doing business in the USA and China.

Contributions from foreigners to American political campaigns are very much a no-no, as James O'Keefe proved in his shocking video sting of an American buying a Hillary Clinton t-shirt with a Canadian's filthy outsider money. Mr. Elias insisted that "contributions to the campaign from Mr. Wang were completely lawful." A spokeswoman for Wang, who donates all sorts of money to American universities and foundations, said his contributions were legal since he holds U.S. permanent resident status, making him a "U.S. person" under federal election law, and therefore eligible to donate to political campaigns. Wang's spokewoman also said he had not been contacted by investigators either. If neither of the supposed participants in the maybe campaign frauding has actually been contacted by the FBI, it sort of makes you wonder who in the Justice Department leaked the story to the press, and why. Probably out of a sense that the public has a right to know.

In one of those reportorial tidbits that doesn't seem to make a hell of a lot of sense, CNN also says,

As part of the probe, the officials said, investigators have scrutinized McAuliffe's time as a board member of the Clinton Global Initiative, a vehicle of the charitable foundation set up by former President Bill Clinton.

There's no allegation that the foundation did anything improper; the probe has focused on McAuliffe and the electoral campaign donations, the officials said.

So the Clinton Global Initiative is in the clear. But McAuliffe's "time as a board member" is part of the investigation? Huh. At least that gives respectable journalists like Ghost Breitbart's House Of Online Rage a headline hook:

Guys, didn't you read the story? There's no allegation that the foundation did anything improper! No doubt we'll eventually find out that McAuliffe's cousin's housekeeper's aunt was in a car crash in 2001, so there's one more entry in the Clinton Body Count. It would be irresponsible not to speculate.

The Daily Beast's Betsy Woodruff also points out Mr. Wang's company, Rilin Enterprises, pledged to give the Clinton Global Initiative $2 million in 2013, after Clinton was no longer Secretary of State, which caused a certain amount of criticism, seeing as how Wang was formerly a delegate to China's National People's Congress. Again, nothing illegal found there, but lots of fodder for the good old "China owns the Clintons" narrative. To be fair, Hillary thought she was really attending a ladies gardening club the whole time, at least until she saw a Queen of Diamonds and was triggered to kill on command.

CBS News reported last year that in addition to the universities and foundations Wang-owned companies donated to, the billionaire's Rilin Enterprises was also very active in lobbying, spending $1.4 million on lobbying Congress and the State Department. Rilin is a construction and trade conglomerate that helped build the Chinese embassy in Washington, and also owns a port near the North Korean border. Again, no proof of any hanky-panky, but it makes for a terrific guilt by association narrative if you half-remember the details, just like how Hillary was a member of Barry Goldwater's staff when she was in high school.

McAuliffe has long been something of an embarrassing shady/asshat pal to the Clintons -- during the 2008 campaign, he was great for laughs while downing rum shots with Morning Joe co-host Mika Brzezinski, on a morning show, which is kind of early even in Wonkette's book of drinking. We also called him "wonderfully deranged" for his insistence, in June 2008, that Hillary was definitely going to be the Democratic nominee. She suspended her campaign and endorsed Barack Obama four days later. McAuliffe always seems to inspire the very best sort of invective: Ralph Nader called him "slipperier than an eel in olive oil." And even his Best Bubba, Bill Clinton, offers only very qualified praise of McAuliffe:

He co-chaired Bill Clinton’s 1996 presidential re-election bid and Hillary’s 2008 presidential campaign. Bill Clinton has praised McAuliffe as a smooth-talking operator, once saying he “could talk an owl out of a tree,” according to The New York Times.

“Absolutely, I would buy a new car from Terry,” Clinton told Times reporter Mark Leibovich in 2012. “But a used car? I am not so sure about a used car.”

CNN closes its not terribly detailed report on McAuliffe's possible campaign improprieties -- whatever the hell they are -- by noting "It couldn't be learned what else the FBI and Justice Department are investigating as part of the probe in [sic] McAuliffe," which sounds rather like they're doing a biopsy, not an investigation of potential campaign finance dirt. Our best wishes to Gov. McAuliffe for a speedy recovery.