In Maine, A Chafed A**Hole Gets Vaseline 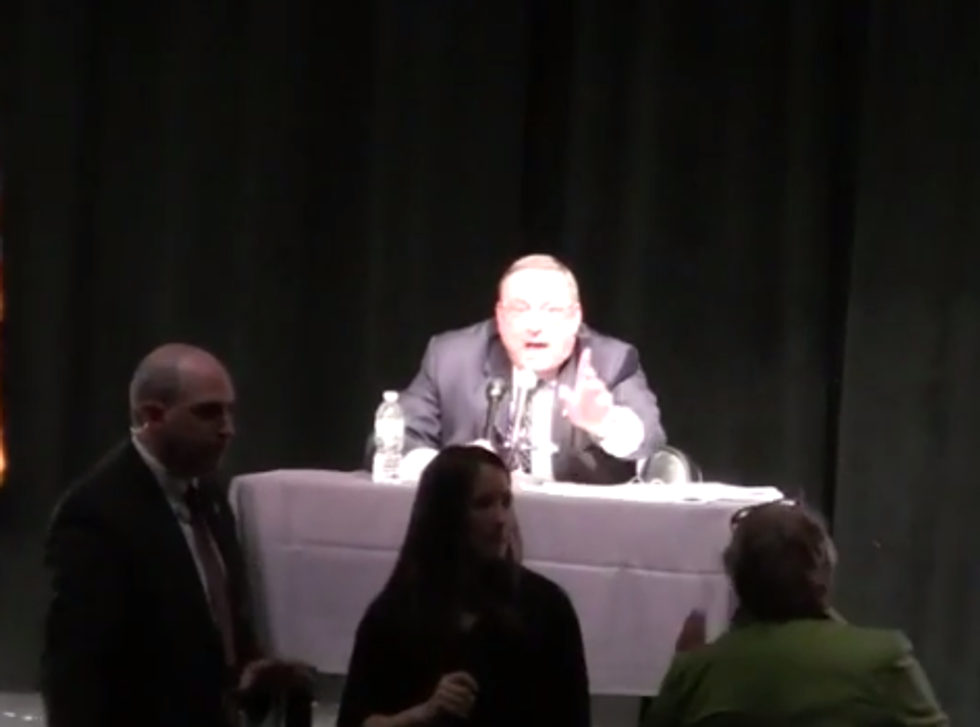 Maine governor Paul LePage is a real shitbag. In 2013, he said a mean about Democratic state senator Troy Jackson, specifically that Jackson does rude things to Mainers in their butts, or more precisely that he "claims to be for the people but he’s the first one to give it to the people without providing Vaseline.” Ya burnt! Also, that is the wrong way to do it, if you are using Vaseline, you are doing it wrong. So that is the context for why a former Democratic Maine rep lady named Jeanne Twomey decided that LePage was being a dick during a town hall meeting, and proceeded to fling a bottle of Vaseline at his head (and miss, because Democrats can't throw, science fact):

According to social media reports, Twomey “threw a jar of Vaseline” toward the governor. Twomey reportedly was escorted from the meeting by security. Video from the event shows Twomey throwing something on the stage, which did not strike LePage, as she was escorted from the building. The item was quickly retrieved by what appeared to be security personnel.

In a video posted by liberal journalist and videographer Andi Parkinson, Twomey said outside the forum that she didn’t find the forum “very democratic.”

“When he engaged and asked me a question I stood up and started to talk with him and answer him and try to tell him what I thought was wrong,” said Twomey, before the recording cuts off.

In the video, they are discussing LePage's plan to reform taxes in Maine, when Twomey stands up to make what sound like some very good, shouty populist points about how the plan would hurt the poors:

“With all due respect, I was elected to speak truth to power, and I was in the state legislature for eight years,["] said Twomey, who was in office from 1998 to 2006. “I sat on those tax committees when they wanted to tax haircuts and tax you to go to the movies. But poor people, governor, can’t go to Disneyland.”

LePage is not having it, says she is so wrong, and asks for somebody to please control the shouty lady. After all, poors can TOO go to Disneyland, they just get on their Obamaphones and call the secret phone number they all have where the government gives them free stuff. As Twomey is being pulled away, she appears to reach into her purse and hurls the Vaseline at him, which seemed to very much be at the ready! Indeed, Twomey confirms that she planned it that way, to be all symbolism-like, as if to say "hey why don't YOU use some of this while you are fucking the poors, eh?"

The Maine Democratic Party, of course, condemned the greasy-lube-substitute-throwing incident, and Maine Republicans are saying can we PLEASE have some civility and maybe a little fucking decorum around here?

While we don't really think that throwing bottles of Vaseline at people is very effective, LePage IS a bag of dicks. Recently he was caught lying about author Stephen King moving out of Maine in search of lower taxes, which was not true, as King is still very much a Maine resident. During the Ebola funtimes that consumed a hysterical nation for at least two months, but is now forgotten, LePage was the one quarantining nurse Kaci Hickox, who did not have the Ebola, and musing aloud about what a shame it'd be if hordes of rabid Mainers went after her with torches and pitchforks. That's the stuff he does when he's not trying to take school lunches away from poor kids or palling around with sovereign citizen terrorists. So, dick.

So, former Rep. Twomey, next time you decide to throw lube-type stuff at Paul LePage, try something like Astroglide! Or Gun Oil, that's a good manly lube that a Good Republican would probably like to use, when fucking the poors.