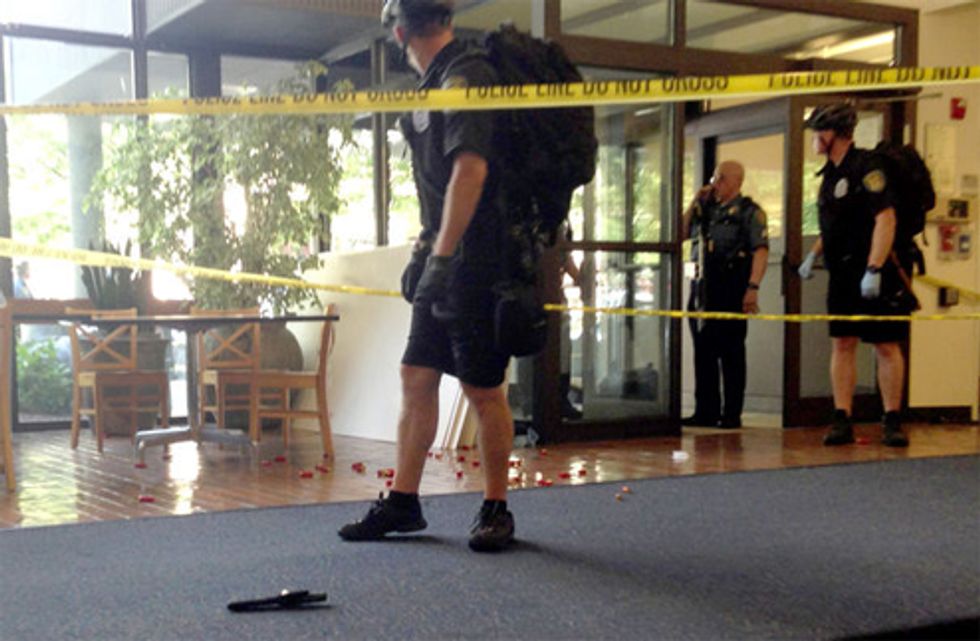 According to Wayne LaPierre, this isn't supposed to even be possible, but yesterday's mass shooting in progress wasstopped by a good guy with no gun:

A Seattle Pacific University (SPU) student tackled a gunman who was reloading his shotgun after killing one student and wounding two others inside a campus hall Thursday afternoon. [...]

Jon Meis, a student working as a building monitor, pepper-sprayed the shooter as he stopped to reload, then put him in a chokehold and took him to the ground, according to police and a friend who spoke with Meis after the shooting. Then other students and faculty members rushed to hold the shooter down until police arrived.

And like so many mass shootings, the guy was stopped by being tackled, not by a good guy with a gun. Go figure.

School officials credited Meis's quick thinking and the school's emergency-response system, which includes regular drills to prepare students and faculty to respond to shootings, for the quick end to the incident.

Let's wargame how this might have played out in the gun-fondlers' ideal wetdream world, where nearly everyone is carrying a gun at all times. We suppose maybe if someone had just drawn their concealed handgun and blown away the bad guy as soon as he aimed his shotgun at someone, there might have been less injury and loss of life. Then again, you can't just go around shooting everyone walking around with a shotgun, because when everyone is armed, everyone is presumed to be a good guy with a gun, until of course they actually draw on another person and must be taken down.

Ah, but the gun fondlers say, if everyone WAS carrying, no bad guy would ever dare risk being a bad guy, because bad guys are all perfectly rational actors who carefully weigh all their options. Also, no one ever fucks up, mishandles his weapon, shoots himself in the leg*, shows off his cool laser sight by pointing at a kid's forehead, puts on a bulletproof vest and invites a friend to shoot at it, etc. And none of THOSE incidents would be multiplied by the presence of guns everywhere, because in that glorious utopia, everyone will be armed, polite, and trained to be wise in the use of their firearms (by choice, though, because only commies would require training).

Oh, fuck the NRA. Let's just be proud of Jon Meis, who is quite simply a hero.

* for once, we're happy to use the sexist standard pronoun...