In South Carolina, This One Weird Law Lets Anyone Command The National Guard 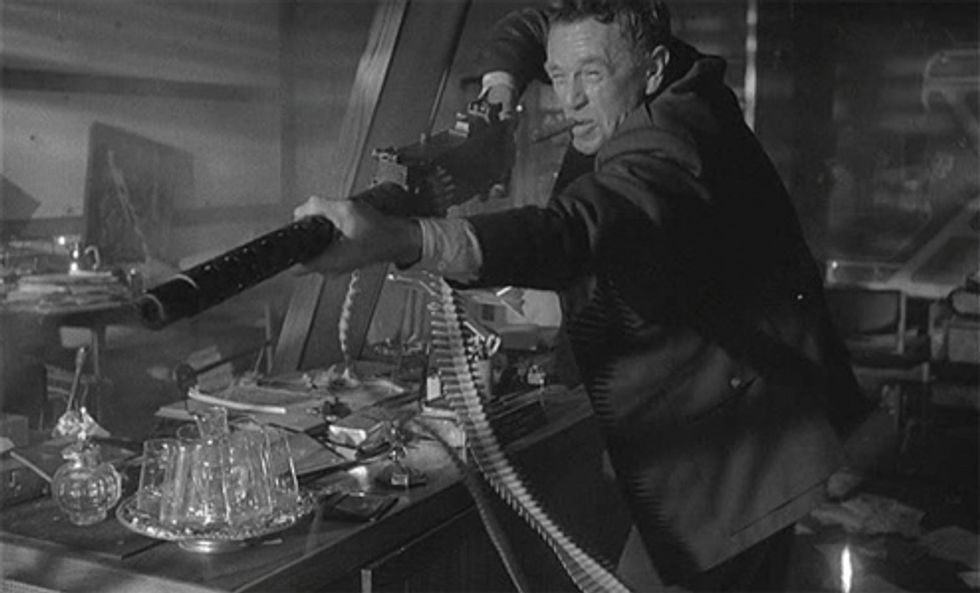 Across our great nation, there are a whole lot of funny dumb laws. For example, the internet will tell you that in Boise, Idaho, it's illegal to fish from the back of a giraffe -- although in reality, this turns out to be a myth -- despite its inclusion in many lists of dumb laws, no such prohibition exists. So mount up and bring bait. On the other hand, in South Carolina, thanks to a quirk of Post-Reconstruction law, the people of the state really do elect their National Guard commander, or "Adjutant General." It's the only state to do this, and it apparently has something to do with what they like to call "Southern Charm":

South Carolina's constitution dates from 1895, when the white establishment reclaimed power after Reconstruction and set up a weak-governor system, with nine of the state's top officials each elected separately, he said.

"That ensured that even if a black were able to become governor, no one person would control the state government and its top offices," Huffmon said.

Hahaha, isn't that "quaint"? We hear it's also illegal to lynch anyone from the back of a giraffe.

The current Adjutant General is an actual two-star general in the U.S. Army, Maj. Gen. Robert Livingston, who has to get himself reelected this year. He's running as a Republican, and has an opponent in the primary, a Mr. James Breazeale, who is a Lieutenant Colonel in the Army Reserve and is currently a 737 pilot for a "major passenger airline," according to his campaign website.

Now, Breazeale's website doesn't mention the small matter of his being on probation after being convicted in Florida on a charge of "entering premises after warning," which he explained to Stars and Stripes as just one of those little things that happens in a stressful marriage, because "some divorces are not nice," and we guess than means he had one of those. You know, circumstances. Also, another profile mentions a 2010 column written when Breazeale was running for Congress; that piece references "a lurid personal history which includes references to intimidation, aggravated stalking, criminal trespass, larceny, threats of suicide, and even threats of murder directed by Breazeale at members of his own family." The column cites what it says are verbatim police reports, including a colorful line in which Breazeale allegedly threatened his former mother-in-law in 1995, saying "I'll blow your fucking head off." Mr. Breazeale dismisses that as overheated campaign rhetoric from an untrustworthy political operative, telling South Carolina paper The State,

“All I would say about that is he is not a legitimate reporter. … That guy was on the staff of my opponent who was running against me for Congress. My opponent … was a Marine who shot and killed two of his prisoners with 60 bullets.”

So you see, you should not believe that alleged police report because it was reported by a campaign staffer for a bad Marine. Breazeale clarifies that he has "never, ever been convicted of any crime, and throughout all of his quote accusations in that area, I had a secret security clearance for the U.S. Army.” So shut up, bad non-journalist! Yr Wonkette has no means of verifying the police report, which the 2010 article says is "on public file at the Bladen County Courthouse in Elizabethtown, NC." And to be sure, the 2010 piece was published on that "we'll run anything" site Examiner.com. The allegedly murderous Marine, incidentally, is Ilario Pantano, who was accused of murdering two Iraqis in Fallujah in 2004; those charges were dropped after an Article 32 hearing found no credible evidence against him. Pantano won the Republican Primary against Breazeale in 2010, but even with an endorsement from Sarah Palin, he lost the Congressional election to incumbent Mike McIntyre. South Carolina elections are fascinating when you get to know everyone.

As for the accusations against him, the stalking and such, Breazeale doesn't deny that there were, you know, police reports and accusations and stuff: "But allegations are just that, but in this country you’re innocent until proven guilty. It’s just totally ridiculous to even comment on any of that.” So shut up already about the alleged stalker guy who wants to be in charge of all the tanks and jets and troops and stuff, OK?

If by some miracle Breazeale does defeat Gen. Livingston in the primary, he'll pretty much be a shoe-in for Adjutant General, because "Republican" and "South Carolina," duhh. Sadly, winning the state office doesn't compel the Army to promote him to the actual rank of General, which he's not qualified for anyway (next rank up would be full Colonel, and the Army doesn't let you skip), so he'd be Adjutant General Lt. Col. James "Definitely not a convicted stalker" Breazeale.

Oh, also, he has "a long and convoluted story about how he came to be on probation following 2013 charges that he was stalking his second ex-wife," but don't worry about that, because once again, you see, he's actually the real victim here, in a big ol' web of lies.

In any case, South Carolina voters, the choice is yours. Might be kind of a kick to put somebody in command of the National Guard who isn't just your boring old by-the-book Major General, wouldn't it?

[The State via Gawker / Examiner]

Follow Doktor Zoom on Twitter. You can find him on his giraffe on the banks of the Boise River.