In Very Own Gettysburg Address, Donald Trump Ends Groping Controversy By Promising To Sue Everybody 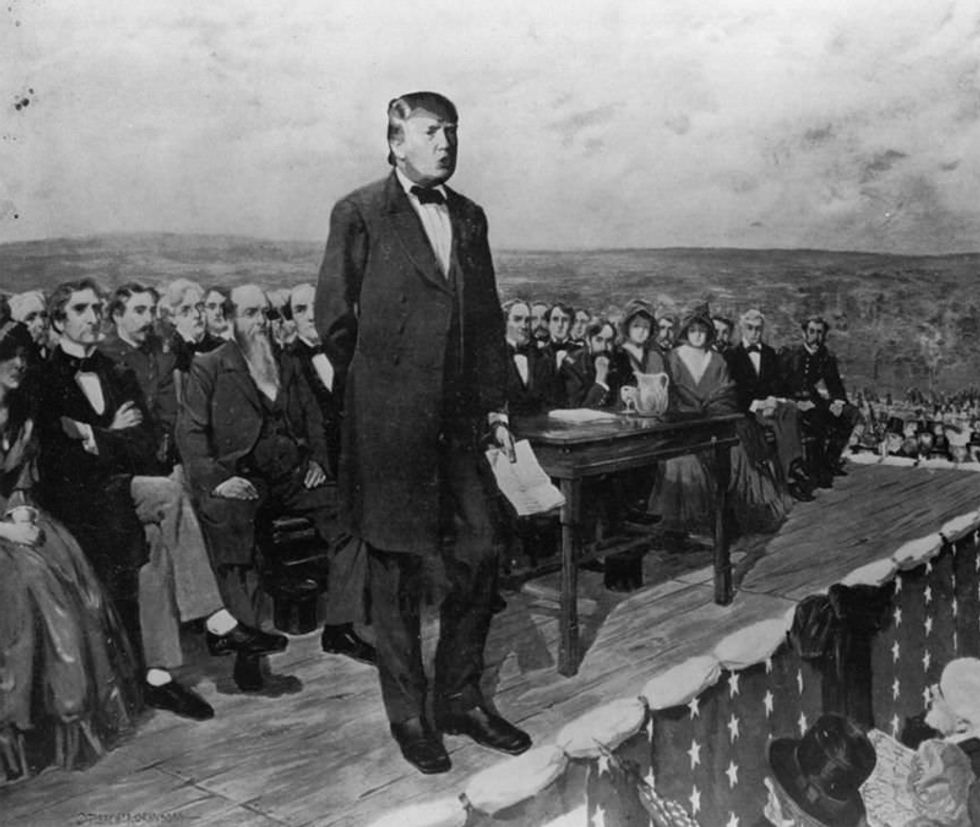 Mary Todd Lincoln? Look at her! I don't think so!

Donald Trump gave a Very Important Speech (it was not important at all) in Gettysburg, Pennsylvania, Saturday that was billed as a preview of what he'd accomplish during his first 100 days "in office," but was really just a rehash of a lot of stuff that he's said before, only packaged into a convenient outline form. Absolutely nobody paid any attention to that policy-like stuff, because everyone knows Donald Trump doesn't really do policy, and because the first part of the speech was yet another scorched-earth promise to get revenge on all his enemies. MSNBC's Katie Tur nailed it:

In addition to explaining once again that he'll be sending Crooked Hillary Clinton to jail and making sure the Big Media never criticize him again, Trump also promised that he would unleash legal hell on all the women who've accused him of sexual assault, because they are big liars and publicity hounds and probably pawns of Crooked Hillary Clinton:

"Every woman lied when they came forward to hurt my campaign," Trump said during a speech in which he also rolled out his plans for his first 100 days in office. "Total fabrication. The events never happened. Never. All of these liars will be sued after the election is over."

In New York Times lawsuit threat, Trump forgets to pick on someone smaller than he is. Whoops!

Curiously, "Sue All The Lying Women" is not on Trump's official list of first-100-days goals. It's almost as if he doesn't really intend to sue them at all. You may have noticed that Trump hasn't sued the New York Times yet for reporting the allegations of two of the women, even though he has the best lawyers around, or at least the best lawyers willing to work for him knowing they may never get paid. We're not going to hold our breath on Trump actually suing the accusers, no, not even adult film actress Jessica Drake, who came forward this weekend. She's the eleventh.

Hillary Clinton wasn't exactly impressed, either, saying during a campaign flight to Pittsburgh, "Donald Trump went to Gettysburg, one of the most extraordinary places in American history, and basically said if he is president, he will spend his time suing women who have made charges against him based on his behavior." And then we hope she shook her hand up and down in the universal signal for "jerkoff."

Elura Nanos at Law Newz blog speculates the threat to sue is an attempt -- probably unlikely to succeed -- to intimidate other women from accusing Trump, and points out some problems with the threat itself:

For starters, his lawyers would probably explain to him that naming “all” the women who have accused him of sexual impropriety is ridiculous. This isn’t a class-action lawsuit. These are eleven separate women, each of whom has made an individual claim against Trump. The allegations may be eerily similar to one another (to say nothing of their striking resemblance to Trump’s own words on the Access Hollywood tape), but they are totally different in terms of time, place, circumstance, and details. Eleven different lawsuits, in several different jurisdictions, with different factual bases, and different sets of pleadings would all need to be drafted, filed, and litigated. If Trump had any chance of winning, these lawsuits alone could keep an entire law firm in business for a while.

But he has no chance of winning.

It all comes down to a very simple Law Fact that even Yr Wonkette, who is Not a Lawyer, understands using itty-bitty words: To prove these women all slandered him, the burden of proof would be on Trump to prove the events never happened. In eleven (so far) cases. As Nanos explains,

In a slander lawsuit, Trump would be expected to provide objective proof that exonerates him. It’s not so much that Donald Trump doesn’t have that necessary evidence; it’s that no such evidence exists. That’s the problem with sex and the law. There’s not usually a lot of corroborative evidence about how one person touched another. That reality is the unfortunate reason why so many rape cases go unprosecuted; at least in this situation, all it’s doing is thwarting an unnecessary lawsuit threatened by an immature, litigious, privileged, egomaniac.

Beyond that, since he's a public figure, even if by some miracle Trump could prove every one of the women had lied, he'd also have to prove that his reputation was damaged; maybe his drop in the polls might help measure that, but that was well underway after the release of the pussy-grabbing tape. Hell, if in some alternate reality he wins the election, he'd have an even tougher time proving the accusations hurt him. He won! The New York Times's response to Trump's threat already noted that, when it comes to women, Trump already had a crappy reputation, a point underlined in the third debate when the audience audibly giggled at Trump's insistence that nobody respects women more than him.

So anyway, Donald Trump got to speak at Gettysburg, which makes him just like Lincoln. Of course, everyone knows Lincoln was wrong when he said in 1863, "The world will little note, nor long remember what we say here," but it was a remarkably prescient prediction about the fate of Trump's speech, and his threats. Now we just need to see if his neo-Confederate supporters complain he should have spoken at a battlefield where the South won.