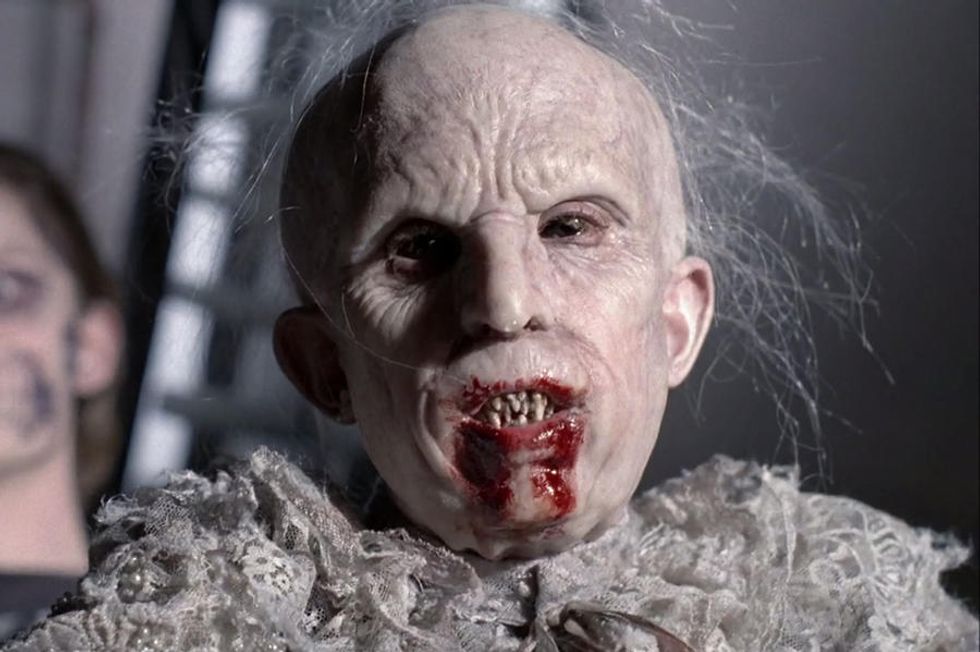 If there is anything the Right loves, it is basing laws on flawed science and things they don't entirely understand, and also making doctors lie to their patients. It is in this spirit that the Indiana House voted on Monday to require doctors to tell patients that medical abortions are "reversible," even though that is pretty much bullshit.

What does it entail? Does it involve raising the dead? Zombie babies? FRANKENBABIES? Well, no, not exactly.

The reversal process, you see, involves jumping up and down while reciting "Mary Had A Little Lamb," doing two umbrella twirls and spitting on the ground -- and poof! Medical abortion undone! Baby saved! OK, fine, no -- but it's about as likely to "reverse" an abortion as doing that would be, only potentially more dangerous, and definitely way more expensive.

The way a medical abortion works is that you first take a dose of mifepristone, and then follow that up with a dose of misoprostol. However, those who support this legislation rely on the claims of one random doctor who says that if you only take the mifepristone, and then suddenly realize you actually do want to have a baby, you can take some progesterone shots and still have the baby. Those shots, and the treatment involved in taking them, cost about $1000.

Dr. George Delgado, medical director of Culture of Life Family Services in San Diego, California, published a paper in 2012 detailing an experiment in which he gave progesterone shots to 6 women who had taken only the mifepristone part of the medical abortion, and four of them went on to have babies. He claims to have performed this procedure on hundreds of women since, with a 60-70% success rate, and hopes to have his findings published in a peer-reviewed journal at some point in the near future. Which is to say that his findings have not yet been reviewed by other doctors, and these Indiana representatives are going entirely on the word of one guy.

Of course, the thing with that is that the mifepristone isn't the medication that causes the abortion. Rather, it makes the abortion part possible by thinning the lining of the uterus. Those who just take the mifepristone part of the cocktail are about as likely to continue being pregnant as those who take the progesterone shots (30-50% will remain pregnant), according to the American Congress of Obstetricians and Gynecologists.

Those who support the bill are fine with pushing an expensive and experimental procedure, because they want women to know that there is a possibility that they could still decide to have the baby after all if they change their mind in the middle of taking the RU-486 dosage. And hey! That's understandable. It's unlikely to happen -- only 0.004% of patients from 2012-2014 changed their mind after taking the mifepristone dosage -- but it's understandable. If this were a proven and safe method for aiding those few who did change their mind, I don't think anyone would have a problem with it. The problem is that it is not.

The thing is, these people are so eager to push the "They don't know what they're doing when they sign up for an abortion!" angle that they are willing to put people's health at risk. They're doing it for the same reason they push "waiting periods" and counseling and all of that other crap. Because if they can make it seem as though abortion is a hasty choice you only make under duress and panic, and one you may regret later, it makes it all the more easy to eventually outlaw the procedure.

This, of course, conveniently ignores the fact that anyone who can get pregnant is constantly aware of that fact, and thus knows exactly what they would do were they to find themselves in that situation. I know what I would do, and if you can get pregnant, I'm sure you do as well. There's a reason that such a small percentage of those taking RU-486 change their mind mid-dose, and it's because in nearly all cases, those who want abortion are absolutely sure they want an abortion.

It would be nice if these people could just wait until the peer-reviewed science is in... but hey, we are talking about Republicans. Republicans in Indiana. Where Mike Pence used to be governor. So that seems pretty unlikely.

Wonkette is ad-free and supported by heathens like you.