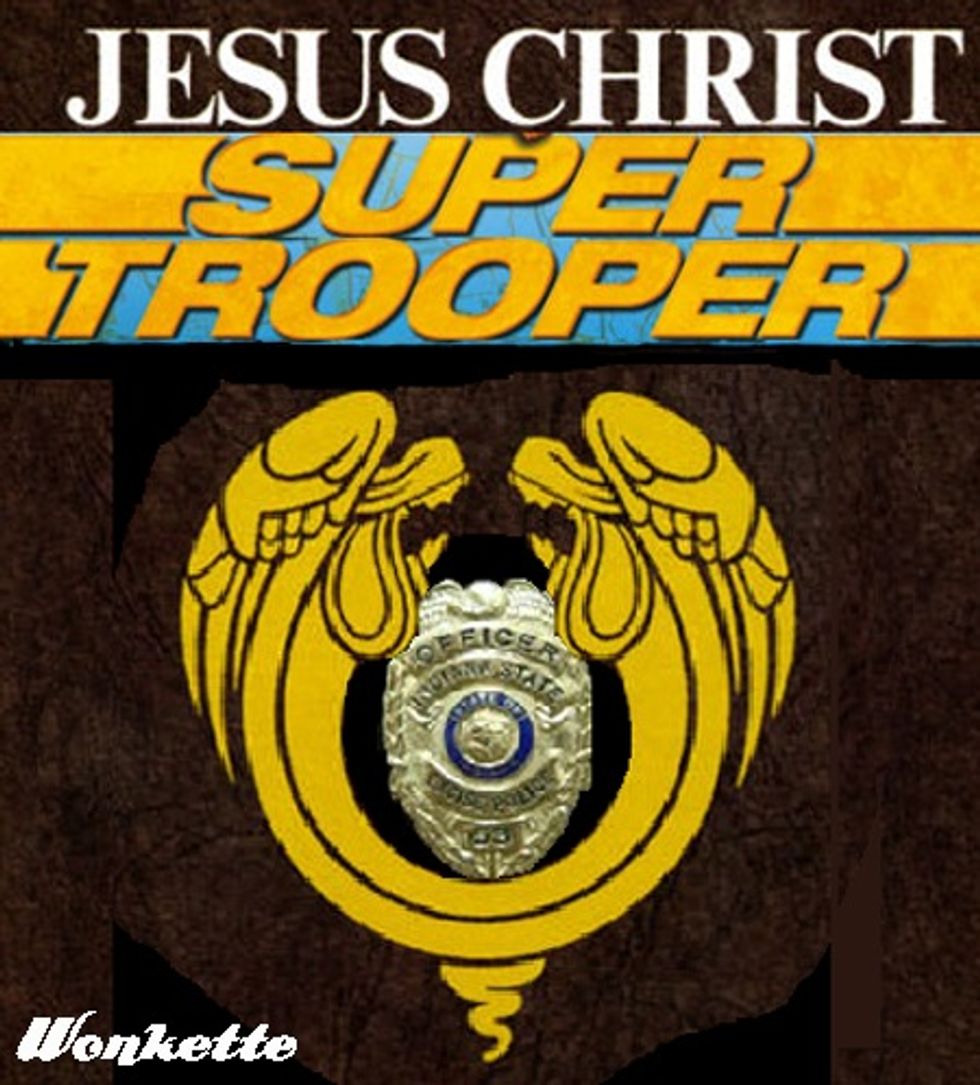 Indiana State Trooper Brian Hamilton seems like a super nice guy. He's the kind of cop who will let you off with a warning ticket if you happen to make an (allegedly) illegal pass. And then he will take that extra step to make sure your soul is good and saved with a few personal questions you can't choose not to answer on account of how he has you pulled over, and he is a state trooper and all.

According to a lawsuit filed by Ellen Bogan, who apparently is heading straight for hell, she was pulled over by Super Trooper Hamilton in Union County, Indiana, for making an illegal pass while driving north on U.S. Highway 27. Ms. Bogan denies that she did any such thing, which is quite beside the point, given what happened after Hamilton wrote her a warning ticket.

Trooper Hamilton prolonged the stop by asking Ms. Bogan, among other things, if she had accepted Jesus Christ as her savior and then presented her with a pamphlet from the First Baptist Church in Cambridge that informed the reader that he or she is a sinner; listed God's Plan of Salvation, noting that the person must realize that "the Lord Jesus Christ paid the penalty for your sins; and, advertised a radio broadcast entitled "Policing for Jesus Ministries."

Clearly, Ms. Bogan is overreacting, because she could have easily just driven away after Trooper Hamilton gave her a ticket, right?

Given that the Trooper remained at her window talking to her with his police care [sic] behind her car with its lights flashing, Ms. Bogan did not believe that she could leave and a reasonable person would not have believed that they could leave.

Pfft. Like a reasonable person would fear that a cop might not appreciate someone saying "Whatever, dude, I'm out of here" and then driving away in the middle of a traffic stop. Besides, it's not as if you ever hear about police overreacting to people who show the slightest bit of resistance. But even if that kind of hypothetical, which never ever happens, sometimes did happen, where does it say a government employee -- like, for example, a state trooper -- can't try to force you to accept Jesus in your heart because you are a sinner who is going to burn in hell, which is exactly why Jesus died, to protect you from that sort of thing?

Oh, is that all? No, actually.

To the extent that Trooper Hamilton unreasonably extended the length of the traffic stop beyond the time necessary to present Ms. Bogan with a warning ticket Trooper Hamilton violated the Fourth Amendment to the United States Constitution.

But other than those two minor constitutional violations, what's the harm? Besides, as Supreme Court Justice Antonin Scalia recently explained, secularists have destroyed the understanding of "separation of church and state," because contrary to their lies, it does not mean "government cannot favor religion over nonreligion" and "to say that's what the Constitution requires is utterly absurd."

See, there you have it. Justice Scalia is an expert at this whole Constitution thing, and he says the government absolutely can (and should, probably, like the founders intended when they wrote "God" into the pledge of allegiance in 1954) favor religion over nonreligion. And if you're going to start favoring religion over nonreligion, shouldn't you favor the only religion that really counts?