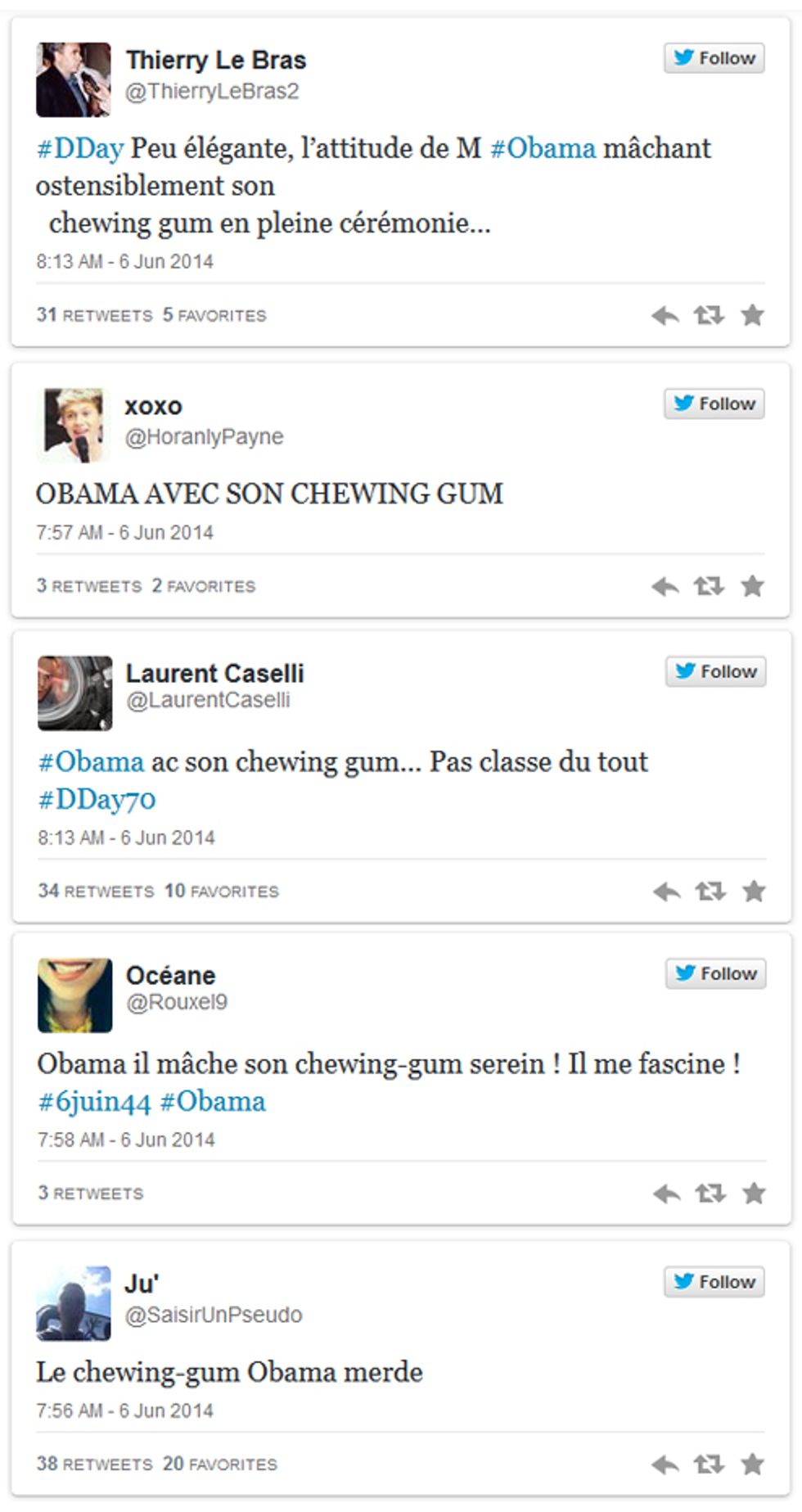 We sure do miss our Newsmax feed, because we almost missed this important Poutrage Update: Barack Obama, the alleged Leader of the Free World, insulted the memory of all the hallowed dead of the Normandy Invasion on Friday when he was seen chewing gum during the commemorative ceremonies. Even worser, the walking nicotine-addicted shamebucket that is our putative President also insulted our British allies by openly masticating in public while applauding the arrival of Her Royal Highness Queen Elizabeth II. It is not known whether any corgis were also insulted in the incident.

The international scandal was recorded on both sides of the Atlantic. French Twitter was pas amusé:

These tweets were posted on the Daily Dot and linked by Newsmax, which may mark the first time American wingnuts have given a damn about what French people think. American tweetists were just as angered, according to Newsmax:

Newsmax also noted that Barack Obama is a repeat offender on this terrible classless habit, and at the very end of the piece, notes that it all stems from his willpower problem, just one more indication of his weakness:

The US leader faced similar attacks on social media after he was seen apparently chewing gum during Nelson Mandela's funeral in December.

The most powerful man in the world has faced an on-off battle to quit smoking and often chews a nicotine-based gum to drive away the craving.

This is not the first time that Obama has provoked outrage with his disgusting classless America-ruining ally-insulting addiction-feeding. We can never forget -- nor should we -- the nigh-Proustian piece that the Daily Caller ran last summer on a similar display of presidential chawing.

But the Normandy Gum-Brandishing Incident was not Obama's only insult to the honored dead. Noah Rothman, in one of his final pieces for Mediaite before he departs for the friendlier environment of HotAir.com, took Obama to task for capping off a "month of disrespect for vets" by apparently being personally responsible for a dumb interpretive dance presented during the D Day ceremony.

History's Greatest Monster, ladies and gentlemen. He probably can't use a nicotine patch because it would reveal him as a reptilian shape shifter.

Follow Doktor Zoom on Twitter. And come back later today for another heapin' helpin' of Dear Shitferbrains.