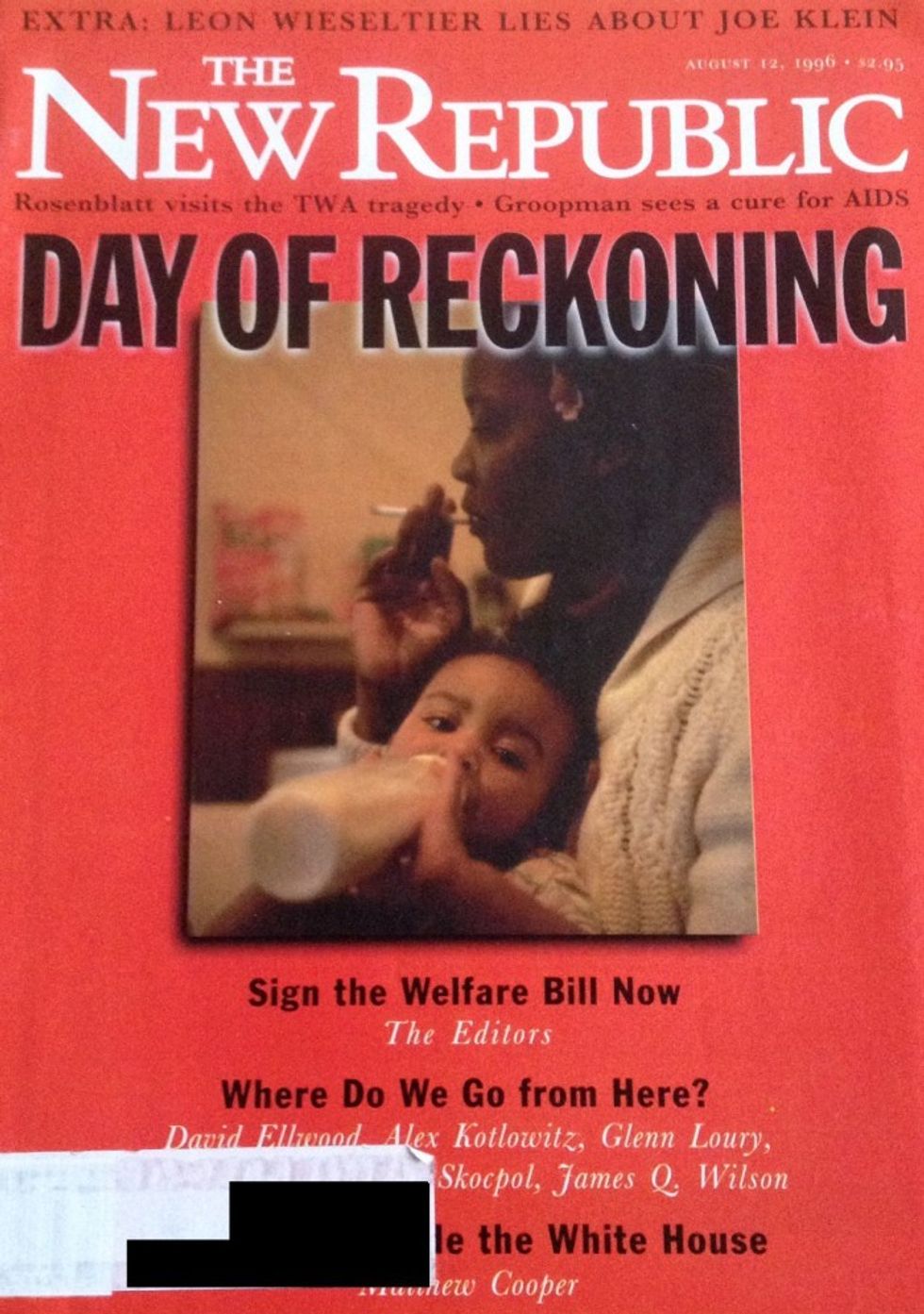 We haven't had much -- or anything? -- to say about the mass hissyfit at The New Republic, because, honestly, how could we care? But that was before we read Ryan Lizza'sInside the Collapse of The New Republic at the New Yorker, to which we could only sit at our kitchen table and moan OH SAVE US SWEET JESUS.

Lizza, a TNR alumnus who points out he is hardly an impartial observer -- which is fine! -- paints the whole wretched episode in gleaming detail. But the details he unearths -- how to put this -- make his colleagues and cohorts look like a bunch of petty children so insulated in their shiny, important workplace they've forgotten how the rest of the world, not to mention journalism, works.

Am I, lowly vulgar vile owner of Wonkette.com, about to school the august staff of The New Republic on ethics in magazine journalism? You fucking betcha!

Our cast of characters, for those who have declined to read the Twitter caterwauls, includes TNR editor Franklin Foer, who is apparently beloved by all; literary editor Leon Wieseltier, who is apparently beloved by all; some guy named Guy who really does sound like the worst sort of tool (WE AGREE!); and villainous new owner (BOO HISS) Chris Hughes, who has SO MUCH MONEY he got from FACEBOOK (HISS BOO), and who wants to do the unthinkable and remake the (did we mention august?) New Republic how he wants it, just because he bought the joint! What part of "stewards" and "august" does Chris Hughes not understand?

The first important thing to know is that Franklin Foer was elevated to editor in 2012 under Chris Hughes, when Hughes fired the last guy, who sounds like a dipshit. (If you need some sort of "evidence" for that, he now runs National Journal, where he continues to employ Ron Fournier as "editorial director.") There were no mass resignations when Hughes fired Richard Just and installed Foer in his place. Just had engineered the sale of TNR to Hughes, but then started freaking out when it was mentioned that Hughes planned to take the title of editor-in-chief, just like previous owners had. He began a campaign to try to block the sale. Bad move dude, you work at National Journal now.

For the most part, after Hughes bought TNR, the staff swam in paradise. New Rich Daddy was handing out travel budgets like penny candy. But a few times, he interfered outrageously with editorial:

Two days after Hughes purchased T.N.R., he informed Just that, as editor-in-chief, he would now write half of the magazine’s editorials. Just could write the other half, but Hughes would clear them. A few days later, as the first issue under the new owner was being printed, Hughes learned that the cover included a headline with negative language about private equity: “Attack of the Crybabies: Why Hedge Fund Honchos Turned Against Obama.” Hughes stopped the press run and the headline was changed to simply read, “Why Hedge Fund Honchos Turned Against Obama.”

That is ... that is some fucking bullshit. Did anyone resign in protest? They did not. Two months later, Hughes fired Just and gave Franklin Foer his job.

Just so we're all on the same page: Franklin Foer was happy to take Richard Just's job. And there's nothing wrong with that. Every journalism job that doesn't come from the incumbent flipping off the owner while screaming GO FUCK YOURSELF BOURGEOIS PIG comes from someone getting canned. I've happily taken edit jobs that came from someone's firing. (Mama was in "newspapers" for almost 20 years before buying this here shitrag currently smearing pixels all over your sweaty hands.) I've quit edit jobs in solidarity with my boss screaming FUCK YOU BOURGEOIS PIG. I've fired people, with their replacements ready to go. To fire someone without a replacement would show you're too impetuous to run a five-cent psychiatry booth. Quitting and getting fired from journalism jobs is standard operating procedure.

But for a while, everything's great at TNR. Until ... dun dun dun! Hughes is a micromanager who makes Leon Wieseltier cut his copy when it's too long!!!!!1!

Hughes could be a micromanager, too. He capped the length of the articles in Wieseltier’s culture-and-arts section, known as “the back of the book,” where essays were famously long and unabashedly complex. “If Leon went five hundred words over, he would make him cut the piece back,” a senior staffer said.

Guys, have we quit in protest yet?

So then Hughes and his husband seem to get real unhappy because Hughes's husband does not win his bid for Congress, and things start getting kind of snippy and standoffish in the office, and Hughes hires as CEO this guy, Guy Vidra, who is from Yahoo! and super-douchey. (He calls TNR "a storied brand," lol.)

Then shit starts going downhill fast. Someone posts on an internal listserv about Apple being shady. Hughes responds six minutes later about fiduciary duties to shareholders or somesuch bullshit, even though the writers and editors didn't know he was accessing the listserv, aiyeeeee! Foer, per Hughes, is wondering if he, Foer, is really the right person to vertically integrate the digital media brand, and is being in general kind of wet-blanketty about it:

Hughes also told me earlier this week, “I think Frank had real questions about whether or not he was the right editor for the role.” Foer had told Hughes several months ago, “I don’t want us to become a technology company. I might not be the right person for a magazine geared toward Millennials.” Foer later told people that “the idea of Vidra turning T.N.R. into a tech startup was like a ‘Saturday Night Live’ sketch.”

So, editor dude's unhappy about the new direction of the company (not losing so many millions of dollars every year). He voices it. But you will not even BELIEVE what Hughes, the owner of the company, does next: HE STARTS LOOKING FOR A REPLACEMENT WHO WILL MAYBE BE MORE SYMPATICO! Can you even? I can not even. The gall of that guy!

Then Foer does something fucking stupid. While Hughes is searching (unsuccessfully so far) for his replacement, he leaks some business details to a couple pals. He'd done a cover story on Amazon being super-shitty, and in response, Amazon, like some kind of total bastard, pulls a big-dollar advertising campaign. Hughes, being in charge of the money, is like "don't say anything about it." Maybe he has some reasons for that! Maybe he is still trying to get them to change their minds, or maybe it is "other reason"! Foer does anyway, and his "pals" leak the news to a reporter. Huh. You know what we called "leaking details about business operations" in every newspaper I ever worked at? We called it "a fireable offense." (Not at Wonkette. You all can leak whatever you like. In fact, I am looking at your pants, and you are leaking right now.)

Finally Hughes finds a replacement: Gabriel Snyder, formerly of Gawker and Wired. (I do not know Snyder. In fact, I don't know anybody from Gawker. I tried to have lunch with some of them when I was in New York once, and they were all like "oooooohhhhh, sorry, we have to be not there that day.") But he doesn't tell Foer about it right away, and Foer actually finds out from someone else. Dick move? Yes. And poor management. But again, you really do have to have someone ready to start when you fire the old guy. So, sort of a wash and in fact not the worst thing we've ever heard. Foer quits. Wieseltier quits with him.

[At the gala] Wieseltier responded to Hughes with a message about stewardship. “We are not only disruptors and incubators and accelerators,” he said, seemingly mocking the language that Hughes and Vidra often used. “We are also stewards and guardians and trustees.” He went on,“The questions that we must ask ourselves, and that our historians and our children will ask of us, are these: How will what we create compare with what we inherited? Will we add to our tradition or will we subtract from it? Will we enrich it or will we deplete it?”

So they both quit. Snyder is ready to go. Everybody and I mean everybody on the masthead quits in solidarity. THIS IS FINE! Quitting in solidarity is a fine thing to do in journalism! But then all the magazine's freelancers do a thing I have never heard of, and that actually takes my breath away as I read it: they all pull their articles from the issue that is two days out. They actually sabotage the august "institution" they're so ethically protecting.

On Friday afternoon, back in the library, Vidra, Hughes, and the remaining editors scrambled to save the issue. “There’s no content,” Amanda Silverman, the deputy editor, told Hughes. “We can’t do it.” As the day progressed, the situation became dire. One by one, most of the remaining authors who had articles in the issue notified the magazine that they did not want their work published. Almost the entire back of the book, which was already in galleys and mostly finished, collapsed. Hughes, Vidra, and Snyder cancelled the issue. The next one won’t appear until early February.

Are you ... are you fucking kidding me? People quit, and people get fired. But to pull your content with no other purpose than to bone the next guy? Wow, you really stood up for labor there; you really stood up for editorial autonomy. You also did this in a way you never did when TNR was publishing shockingly racist shit under the last editor and owner, Marty Peretz. Your ethics, they sparkle and shine, wait no they don't. You're the worst.

For the densest, most potent crystallization of why nobody but the whiter half of your Twitter feed could care fucking less about what happens to the whiny-ass tittybabies of TNR, we leave you with this heartfelt cri de coeur:

One particularly high-flown expression of the pervasive frustration among the writers came from Cynthia Ozick, a novelist and critic who has written for The New Republic for many years. After Wieseltier resigned, she e-mailed him a poem, inspired by Byron’s “The Destruction of Sennacherib,” that former staffers circulated:

The Siliconian came down like the wolf on the fold,

And his cohorts were gleaming in wireless gold,

As all before them they willfully extirpated:

The Back of the Book and the Front and the Middle,

Until all that was left was digital piddle,

And Thought and Word lay dead and cold.