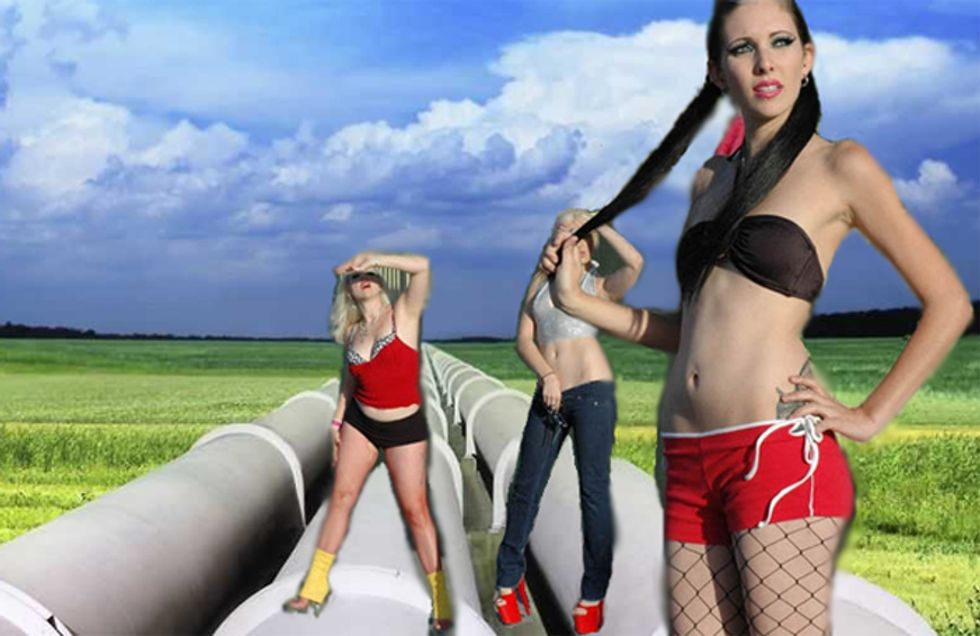 This post supported by a grant from the Patty Dumpling Endowed Chair for coverage of oil spills, pipelines, fracking, and Dear God What Is This About Whores?

The Keystone XL pipeline isn't quite dead yet, even though Barack Obama personally strangled it (sort of) back in February. There's no shortage of other pipelines being prepared to leak all over this great land, and the oil industry is working on some inventive new methods of persuasion when it comes to getting the filthy things. If money doesn't work, how about offering landowners some prostitutes, maybe? Or at least, that's what -- um, whom? -- was on offer from a land agent for the proposed Bakken Pipeline, according to southeast Iowa farmer Hughie Tweedie, who says that he has recordings of two conversations in which the land agent offered him the services of "an 18-year-old prostitute" in exchange for the right to lay some pipe on Tweedie's property. In a news conference at the Iowa statehouse in Des Moines Monday, Hughie said, "On these recordings you will hear evidence of my senior pipeline representative offering me not once, not twice, but three times the sexual services of a woman, the last time being a $1200 teenage prostitute.”

So they offered you once, twice, three times a lady of negotiable affection? Thanks a lot for getting Lionel Richie stuck in our head, man. The incident is not the first time that sex and oil pipelines have become intertwined in public discourse; in 2012 Louie Gohmert delivered a bizarre treatise on how caribou just loved having sexytime in the shadow of the Alaska Pipeline, but those were adult straight-married caribou, so that's OK.

Tweedy said that he had originally intended to distribute copies of the recordings to reporters at the news conference, but that since he's considering a lawsuit against the pipeline company, Energy Transfer Partners, he was withholding the recordings on the advice of his attorney (who may also have advised him to rent a very fast American car, a convertible, and to head for Las Vegas with all the drugs he could find). Tweedy added that if the Iowa Department of Justice launches an investigation, he'd happily hand the recordings over to the state attorney general.

But it's not just about the prostitutes that the oil company was offering him, said Tweedy -- rather, the real problem is the hoors who work inside the statehouse:

“If an old junkyard dog like me was offered the sexual services of little girls to get my hackles down, I wonder what was offered to the powerbrokers of this state to gain their support for silence,” Tweedy said. “Shame, shame, shame.”

Tweedy said he decided to go public with his allegations to spur legislators to pass a bill that would make it more difficult for the pipeline to seize property for the project.

We like this Hughie Tweedie guy! He sounds like a "character," and what's even better, he seems to have some character too -- in a March profile, he told anti-pipeline activist Ed Fallon that the forested patch of land that Energy Transfer Partners wants is not for sale, no way, not for a million bucks.

Tweedie, who describes his politics as "libertarian," but apparently not of the "everything has a price" variety, said that the pipeline company had treated him like a "hick and a fool," and that he'd had quite enough of their pressure and bullying: “I very well may be a hick, but I am no fool and I don’t think most Iowans are…Do not be fooled. This is exactly how they do business.”

Energy Transfer Partners issued a statement saying that it was aware of Tweedy's claims, assuring the public that "We take these types of matters very seriously and are investigating further.”

Yr Wonkette, who aspires to someday be a cantankerous old troublemaking activist coot -- so far, we've got the "cantankerous" and "old" parts pretty much down -- would like to take this opportunity to offer to buy Mr. Tweedy a beer. And does he have a GoFundMe yet? Everybody gets a GoFundMe this year.