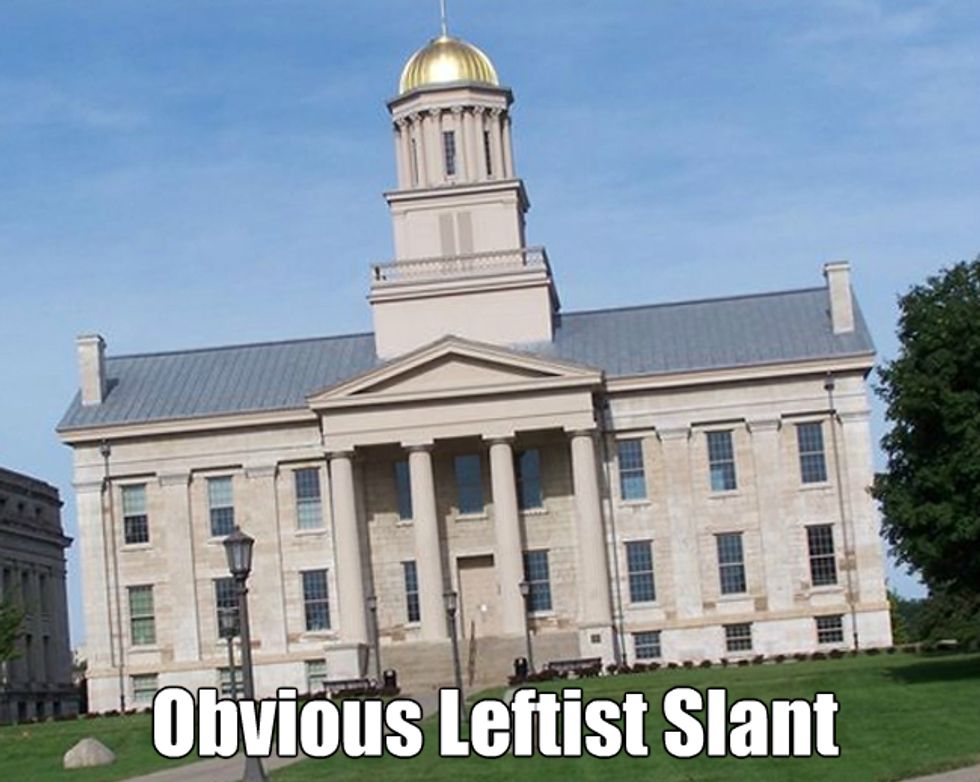 But what if you stand on the steps and turn around?

You always hear conservatives whining about how higher education is filled with liberals who insist on Knowing Stuff and other biases, but seldom do you see anyone actually try to do anything beyond complaining that some professor somewhere said Donald Trump scares them. Now sure, once that professor's name gets out, they may be forced into hiding by death threats from the Online Flying Monkey Brigade, but such piecemeal action isn't terribly efficient. Fortunately, Mark Chelgren, a Republican state senator in Iowa, has introduced a bill that would finally bring some political balance to the state's universities, finally forcing those hypocritical liberals to really accept diversity. Chelgren's bill, Senate File 288, would in essence purge higher education of Democrats (or at least require aggressive affirmative action hiring of Republicans), so the professoriate would be more "balanced" and therefore become safe spaces for the oppressed conservative students who currently suffer from liberal indoctrination. We'll let Pat Rynard at the Iowa Starting Line blog go over the basics:

The Secretary of State’s office would be directed to provide voter registration lists to the colleges so that new job applicants’ party affiliation could be checked before the hiring process gets underway. Graciously, Chelgren allows for people registered as No Party to slip through the process without facing the litmus test.

So, yeah, we can see some potential problems with this scheme, just maybe. As Rynard points out, given that there probably are more Democrats than Republicans in higher education (depending on the academic discipline, and for reasons having little to do with "bias"), the most obvious effect is that Iowa would effectively be hanging up a sign saying "Democrats Need Not Apply" until universities and colleges have hired enough Republicans and no-party folks to achieve a "balance." And of course, people wanting to apply for teaching jobs could simply change their registration, which wouldn't achieve the ideological "balance" Chelgren dreams of. Not that ideology even enters into the teaching of a lot of subjects -- if there's a liberal or conservative way of teaching chemistry, we've never heard of it (apart maybe from insisting that evolution had nothing to do with organic molecules). Would Theater Arts jobs just go unfilled until a Republican could be found to teach them? Would applicants from out of state -- most tenure track jobs involve a national search -- be subject to a similar ideological test? That's going to be a problem for applicants from states that don't track party affiliation.

Oh, and then there's the small matter of the proposal being a tad on the fascist side. Rynard notes Republicans only took over control of the Iowa Statehouse in the last election, and maybe they're simply eager to impose one-party rule, because after all, they won. Even so, here in U.S. America, and such as, we don't do ideological purity tests for teachers, or at least we have generally tried to avoid it outside of the worst days of McCarthyism. (Yes, this is where our Deleted Commenters will point to Ben Stein's dumb creationist movie and say liberal fascists already prevent Christians from teaching science.)

How Chelgren thinks a party affiliation test for hiring would be even remotely Constitutional is also a complete mystery, but at least he's trying to do something about the serious problem of conservative snowflakes being exposed to ideas they may not like, the poor dears. We'll have to keep an eye open for the next bad idea to come out of this guy -- he seems stupid enough to become a national Republican star some day.