Is Discussing National Security In The Mar-A-Lago Dining Room A Great Idea? A Wonkvestigation 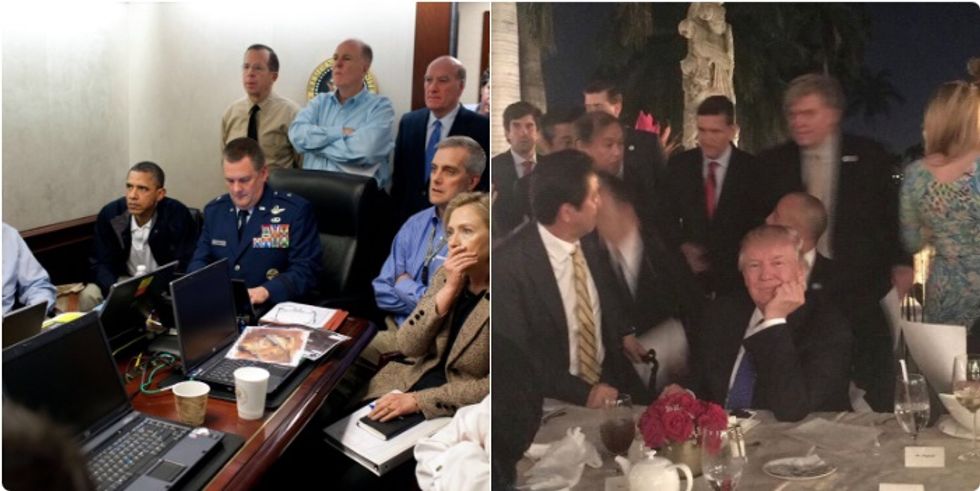 A study in contrasts, via CrookedMedia'sJon Favreau

The big political topic on Twitter Monday is a pretty simple question: Is this any way to run National Security? You might remember this vignette from our earlier story about how the intelligence community is a bit reluctant to share all the info with the current Commander in Chief, who may or may not have pals in Russia listening in: After North Korea test-fired a ballistic missile into the ocean this weekend, Trump and his staff had a quick strategy session right there in the dining room of Mar-a-Lago:

As Mar-a-Lago's wealthy members looked on from their tables, and with a keyboard player crooning in the background, Trump and Abe's evening meal quickly morphed into a strategy session, the decision-making on full view to fellow diners, who described it in detail to CNN [...]

Trump's National Security Adviser Michael Flynn and chief strategist Steve Bannon left their seats to huddle closer to Trump as documents were produced and phone calls were placed to officials in Washington and Tokyo.

The patio was lit only with candles and moonlight, so aides used the camera lights on their phones to help the stone-faced Trump and Abe read through the documents.

Even as a flurry of advisers and translators descended upon the table carrying papers and phones for their bosses to consult, dinner itself proceeded apace. Waiters cleared the wedge salads and brought along the main course as Trump and Abe continued consulting with aides.

Huh! So if you want to be on hand for some top-secret intelligence chat, all you need is a Mar-a-Lago membership, still a bargain even though the price just doubled to $200K, and you don't even need a security clearance. Just make sure you're dressed appropriately, and try not to be too obvious about lifting up your wristwatch every few minutes to snap pictures of the documents on the president's table, Mr. Bond.

And about those aides using the flashlights on their phones to illuminate the classified documents "President" Trump was "reading"? It seems, if you are the paranoid type, that phones are quite easily hacked to turn into listening and video-ing devices -- so much so, that Edward Snowden had his guests keep theirs in the refrigerator to "block any radio signals that might be used to silently activate the devices’ microphones or cameras."

So pointing your phone at those documents might be frowned upon!

Heck, while you're wandering around the dining room, you can also get a snapshot with the guy who carries the nuclear "football" and post it to Facebook! (The Facebook post has since been taken down, but screenshots are forever.)

The guy who took the photos, Richard DeAgazio, was awfully impressed by Trump's grace under pressure. Oh, sure, he could have gotten up and gone sometwhere more secure, but why?

“He chooses to be out on the terrace, with the members. It just shows that he’s a man of the people,” DeAgazio said.

And any paying members of foreign intelligence services. It's not like many countries can afford $200,000 anyway.

Looks like the security situation is pretty much top-notch, huh? And while all the National Security-ing was going on, there was also a wedding reception right next door. Cozy! But of course, a bunch of Negative Nellies in the press seem to think maybe it's not such a great idea to move the Situation Room to your club's dining room. We don't see the big deal. It's members only, for heaven's sake.

Thanks god we avoided electing the candidate who had a private email server and treated secured information so casually that it threatened our safety. As Donald Trump knows, to really keep things secure, you have to handle that sort of thing at dinner. And then tweet about it on your unsecured Android phone.

OK, sure, so there's that -- a whole different category of insecure server to worry about.

You know, it sure is a good thing Republicans care so much about security. Here's Paul Ryan giving the president hell about his careless handling of classified information:

Individuals who are "extremely careless" with classified information should be denied further access to such info. pic.twitter.com/0C76Ae95LD