IS IT TIME FOR ALL THESE TRUMP RUSSIA FUCKERS TO GO TO JAIL YET? 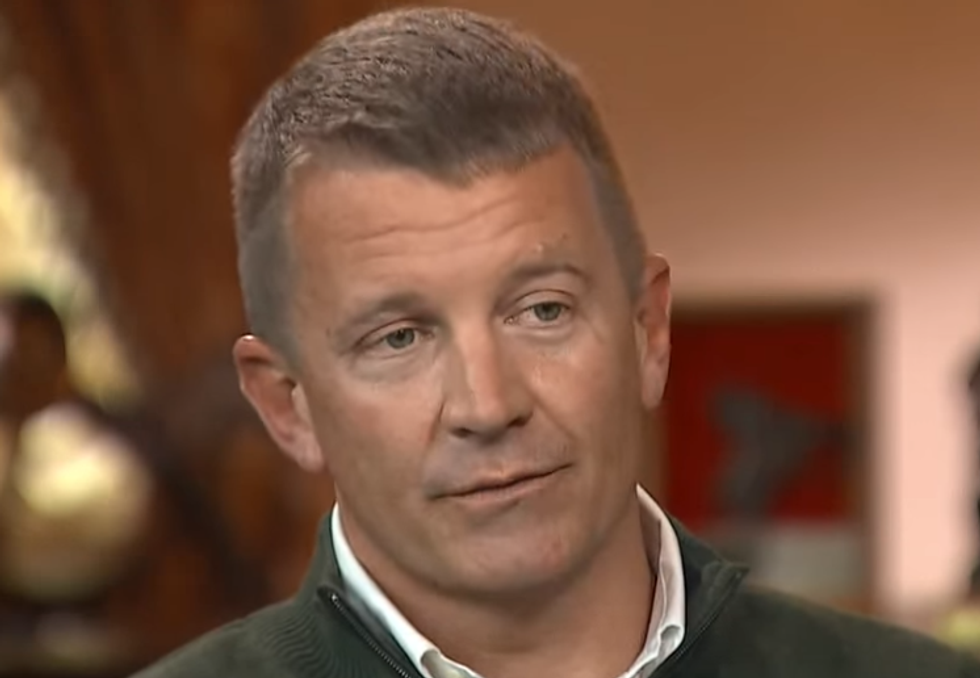 Erik Prince, the creepy Blackwater guy who is DEFINITELY NOT A TRUMP ADVISER SHUT UP

Back in the weird days of the Trump transition, the reality show scene at Trump Tower was so weird. All kinds of obnoxious idiots would show up in the gold-plated lobby, and they'd get their pictures made like "Oh hey I am Mike Huckabee or I am Kanye West or I am Mitt Romney, and Kellyanne Conway is going to take me upstairs for 15 minutes so Donald Trump can tell me if I am the biggest loser or if I am the winner of 'The Celebrity Apprentice.'" But then there were those who didn't go in for the public paparazzi shitshow, like Russian ambassador Sergey Kislyak, who for some reason didn't go in the front door for his secret meeting with Jared Kushner and disgraced then-future-now-former national security adviser Michael Flynn.

One Trump adviser who took the incognito route (for WHATEVER reason, like maybe his baby-face is allergic to the light of day) was sadistic Christian crusader death freak Erik Prince, the Blackwater guy who is also Education Secretary Betsy DeVos's baby brother. He did the back-door entrance (not in the buttsex way) for meetings at Trump Tower with Flynn, just like the Russian ambassador did! Now, of course, according to Prince and according to the Trump regime, Prince WAS NOT EITHER an adviser to the transition team. They wouldn't even recognize each other if they ran into each other on a crowded Acela train! Haha just kidding, because according to a report in Bloomberg, "crowded Acela train" was another place Prince liked to meet with the Trump transition team, all secretive-like:

The meetings occurred in Trump Tower, the administration’s transition office in Washington and elsewhere, according to people familiar with them. In one informal discussion in late November, Prince spoke openly with two members of Trump’s transition team on a train bound from New York to Washington. He boarded the same Acela as Kellyanne Conway and they sat together. Joining the conversation at one point was Kevin Harrington, a longtime associate of Trump adviser Peter Thiel who is now on the National Security Council. They discussed, in broad terms, major changes the incoming administration envisioned for the intelligence community, as recounted by a person on the train who overheard their conversation.

WHAT. THE. HELL. The transition team for Trump -- who has been at absolute war with the intelligence community since pretty much day one, probably because it's got loads of shit on him and he knows it -- was doing Strangers On A Train with Erik Prince and talking about changing the nature of the intelligence community? To what aim, please? And also, did Kellyanne Conway wear spy sunglasses or any other cool spy gear and were there dead drops? Inquiring minds would like to know!

Strategic intelligence analyst Eric Garland would like to know the same thing, specifically about why in the hell one of Peter Thiel's buddies was doing secret train meetings with Prince:

At the risk of sounding like a big conspiracy theorist, we are JUST SAYING that this very weird assortment of shady (and very rich!) characters meeting on trains and doing back door meetings to each other (and not in a That's What She Said way) is KIND OF BIZARRE, WE ARE JUST SAYING. And when we say "weird assortment," we mean it:

Prince was a generous financial backer of the Trump campaign, along with his sister, Education Secretary Betsy DeVos. Prince contributed at least $100,000 through a political action committee run by billionaire hedge-fund manager Robert Mercer. That PAC also funneled contributions from Thiel, the billionaire Silicon Valley entrepreneur who has acted as an informal liaison to the high-tech world for the White House.

Christian theocrats, mercenaries who get their rocks off killing Ay-Rabs, the creepy Steve Bannon-aligned Mercers (who partially own Breitbart), big weird gay PayPal billionaire Peter Thiel, who Trump memorably got all hand-cuddly with during the roundtable he threw for tech leaders during the transition ... what in the name of fuck-all do these people have in common, and, like Garland asked above, "What were these madmen planning and why?"

It's especially curious when you consider that Prince did all this hush-hush advising, and then immediately went to the Seychelles for a meeting with a Putin aide to establish a new "back channel" between Team Trump and the Russians. The meeting was organized by the United Arab Emirates, and it was generally understood by those in attendance that Prince was an "unofficial" representative of Trump.

And oh yeah, there is that thing about how, just before the election, when the nation was IN A FIT OF ORGASMIC HORROR because FBI Director James Comey said Hillary Clinton might have sent a couple other emails about yoga or "The Good Wife," Prince was running around saying he had secret exclusive information from the NYPD and FBI -- i.e. Rudy Giuliani's rogue New York FBI office -- about how there were supposedly 650,000 new Hillary emails, and they were all about how she likes to sex up kids on sex vacations. Comey, of course, announced a few days later (but too late!) that it was a total false alarm, and that Hillary would remain a free woman, BECAUSE SHE'S NOT A CRIMINAL.

Oh, and remember how Rudy Giuliani seemed to know the FBI was about to drop some sort of bomb on Hillary, two days before Comey sent his letter? And weirdly, Prince seemed to have the same "sources" in the NYPD and FBI that Giuliani had? HUH THIS IS JUST A LOT OF WEIRD THINGS.

How funny, that Russian front operation WikiLeaks was disseminating the same dezinformatsiya (disinformation) as Erik Prince and Rudy Giuliani. It's almost like they ...

If we didn't have real journalism doers like Glenn Greenwald's The Intercept to tell us we're all being silly, we might think the FBI and Congress and intelligence agencies around the world should be doing investigations into all this stuff, oh wait they are, IS IT TIME FOR ALL THESE FUCKERS TO GO TO JAIL YET?