Is James Comey Going To Leaker Jail? Or Are Republicans Just FULL OF SHIT? 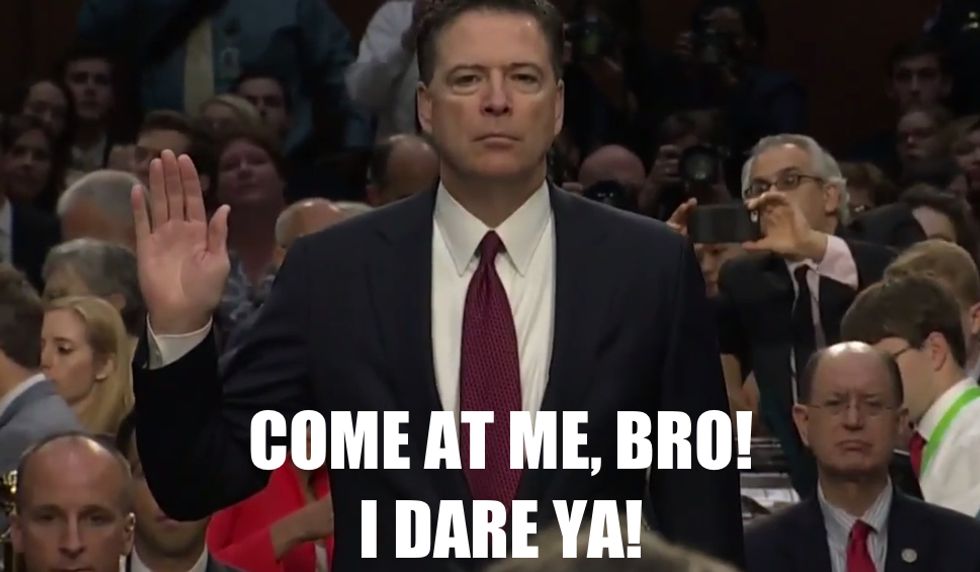 Oh, for pity's sake! NO, JAMES COMEY IS NOT ABOUT TO BE PROSECUTED FOR "LEAKING." Stop listening to those right wing loons on Twitter!

Let's put aside the paradox of how Comey could have "leaked" a "false statement." If Comey were in any actual legal jeopardy, it wouldn't be from Trump's personal attorney Marc Kasowitz threatening to "file a complaint" with the Justice Department. COME THE FUCK ON!

There Is NO LAW OF LEAKS! That Is Not a Thing!

First of all, there is no statute that says, "If U leak, U go 2 jail!" Donald Trump may believe that the government "owns" all the information and he has absolute control over its distribution. But the president watches Fox News seven hours a day, so don't go by that jackass. Here on Planet Earth, different people are allowed to disclose different information, to different people, at different times. Who knew the law could be more complicated than a meme, right?! So let's take a looksee at what people are threatening to prosecute Comey for, and lawsplain why that shit is never gonna happen! Mmmkay?

Last Thursday, James Comey testified that he forwarded his notes on meetings with Donald Trump to a friend, who then shared them with the New York Times. At which point, the Wingnut Outrage Machine got a collective joy boner at the prospect of covering Comey The Leaker of Memos Written Using a Government Ink Pen, rather than Donald Trump Obstructing Justice, an Impeachable Offense.

Today, Mr. Comey admitted that he unilaterally and surreptitiously made unauthorized disclosures to the press of privileged communications with the President.

Oooooh, PRIVILEGE! That sounds serious! But what privilege would Kasowitz be referring to? Certainly not attorney-client privilege, since Comey was NOT the president's lawyer. Hence his refusal to swear a blood oath of loyalty as a condition of keeping his job.

Earlier in the week, the White House had threatened to invoke executive privilege to block Comey's testimony. This prompted a collective eyeroll from every law professor in the country. As Steve Vladeck put it in the Washington Post,

The privilege serves as a powerful protection against compelled disclosures of internal, confidential executive branch communications — whether in response to court orders, congressional subpoenas or both. It is meant as a defense in those contexts, providing a valid justification for a government officer’s refusal to comply with a demand to testify or produce documents [...]

So where a current or former government employee wants to cooperate and turn over the requested information, the privilege itself won’t — and can’t — stop him or her. [emphasis added]

The claim of executive privilege was always bullshit, which is why Sarah Huckabee Sanders said last week that the president was going to do us all a big favor and waive it.

Violation of Employment Agreements: NOT A CRIME

Marc Kasowitz has also promised to file complaints with the Department of Justice and the Senate Judiciary Committee. RUH ROH! Is Comey in big trouble now, Mister????

Kasowitz is essentially threatening to turn Comey in for violating the terms of his employment contract with the FBI. Which is a firing offense! Except...JAMES COMEY WAS ALREADY FIRED. As CNN lays out, James Comey is in serious danger of getting an official reprimand.

The Justice Department, however, has limited jurisdiction over former employees. They can investigate, but the remedy in the event of finding wrongdoing would be to make a note in Comey's file should he ever seek to be employed by the Justice Department again.

I hope you know, this will go down on your permanent record!

You Say Leaker, and I Say Whistleblower. And So Does the Supreme Court.

Several legal commentators have predicted that James Comey might be prosecuted under 18 U.S.C. § 641. This law threatens jailtime for:

Whoever embezzles, steals, purloins, or knowingly converts to his use or the use of another, or without authority, sells, conveys or disposes of any record, voucher, money, or thing of value of the United States or of any department or agency thereof, or any property made or being made under contract for the United States or any department or agency thereof.

And if James Comey had taken those memos and sold them to the National Enquirer, he might be in deep shit right now. But in 2015, the Supreme Court ruled that the Whistleblower Protection Act bars government retaliation against federal employees who disclose:

(i) any violation of any law, rule, or regulation, or

(ii) gross mismanagement, a gross waste of funds, an abuse of authority, or a substantial and specific danger to public health or safety.

Well, the president was abusing his power to obstruct justice and interfere with a lawful Justice Department and Congressional investigation. So...AOTK???

Chief Justice Roberts wrote the opinion protecting the whistleblower in 2015. He was joined by Justices Scalia, Alito, Breyer, Ginsburg, Thomas and Kagan. So lotsa luck prosecuting James Comey for telling the New York Times about all the times Donald Trump tried to obstruct the prosecution of Michael Flynn!

Reasonable people can differ on the ethics of Comey leaking the memos to the New York Times. James Comey is one complicated dude! For a man trying hard to do everything right, he sure does manage to piss people off. Your $5F will personally never forgive him for sticking Anthony Wiener's dick pix in the middle of the 2016 election. But is that guy going to jail?

Good Monday Morning, Wonkers! Please put a dollar in the collection plate to celebrate another ad-free week at your favorite Mommyblog!