Is 'Kirk Cameron's Saving Christmas' Truly The Worst Movie Ever? A Wonkette Investigation 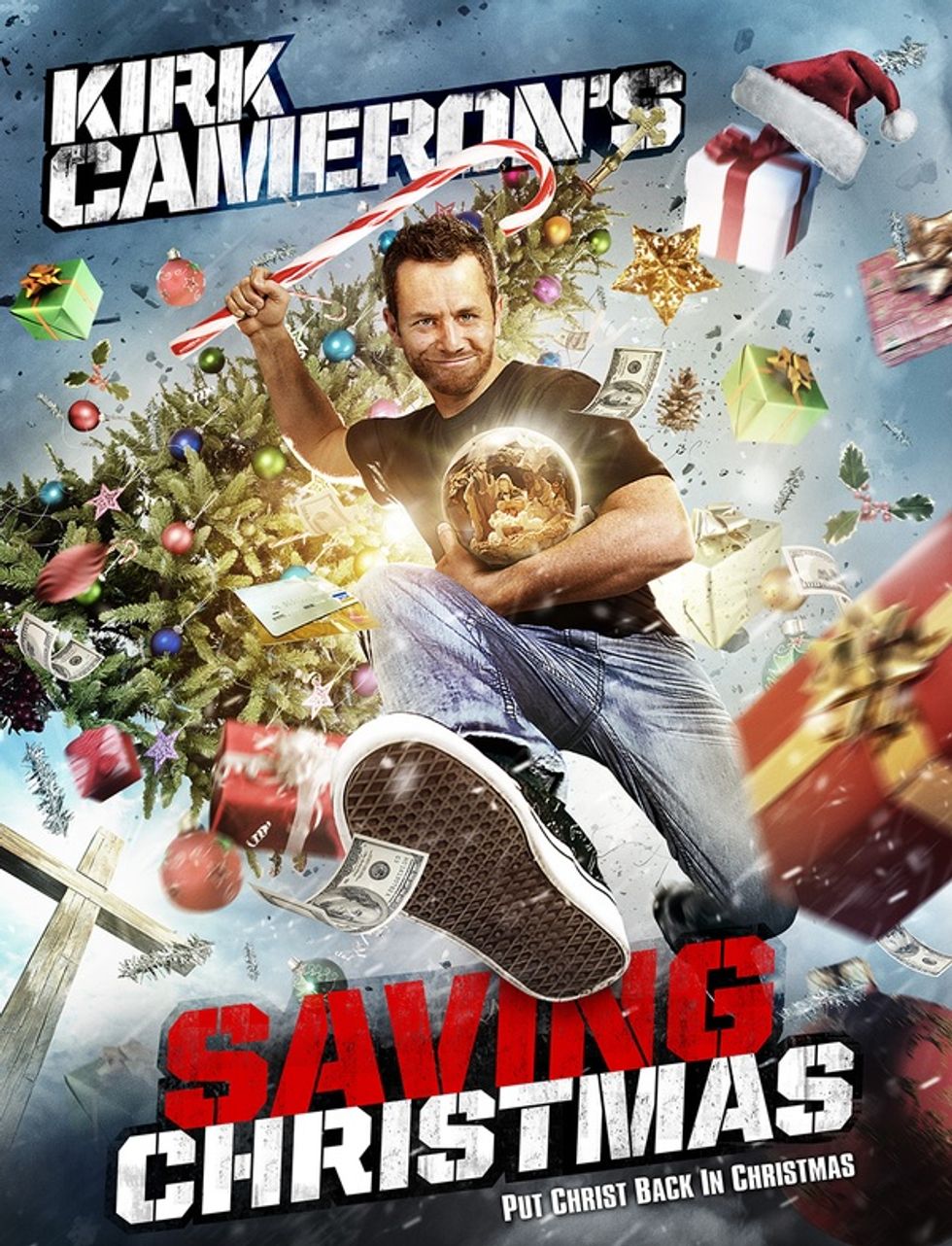 As fans of terrible movies and of rightwing Christianist propaganda, we've been looking forward to Kirk Cameron's Saving Christmasfor months now, but it was the news that it had achieved the dubious distinction of getting the lowest rating of any film on IMDB.com -- ever -- that finally drove us to the theater. Now, Kirk Cameron would have you believe that the low rating is in fact the result of a plot by atheists to destroy his movie (and maybe Christmas). There's even an element of truth to the claim, especially if you replace atheists with internet trolls and destroy with relentlessly mock. Or maybe Cameron's thanking atheists for all the free publicity. You know, reverse psychology. So yes, organized trolling has given Saving Christmas a historically low score. But is it truly the worst movie ever?

Our first inclination is to scoff. In a world (say that like Don LaFontaine) with so many bad movies, how could a bit of holiday Bible-beating by a former sitcom star even hope for a shot at a title with so many deserving contenders? Still, we decided to keep an open mind: maybe it really could be worse than Manos: The Hands of Fate,Troll 2, the Star Wars Holiday Special (yes, TV, we know) or Plan 9 From Outer Space.

And really, how do you evaluate badness? Unlike, say, Manos, Cameron's little waste of celluloid (or given current technology, ones and zeroes, we suppose) is at least minimally technically competent, in that it was made by people who have seen and operated a movie camera and a boom mike.

On the other hand, Saving Christmas lacks an essential quality of those other bad movies: it is not entertainingly bad. We can't imagine anyone renting this thing for the purpose of giving it an amateur Mystery Science Theater treatment -- or if they try, they may well just give up. It's terrible, but it's also tedious. So maybe that actually does make it worse than the others? Like the 2004 new-agey quasi-documentary What the [Bleep!] Do We Know?, with its Let's-Say-"Quantum"-A-Lot woo-woo follow-your-dream stuff, Saving Christmas is so excessively earnest and preachy that you mostly just find yourself rolling your eyes; unlike that mess, it's also attempting to be, at least in morphology, a comedy, so there's the added burden of all those mirthless attempts at humor.

There is exactly one thing about Saving Christmas that surprised us, particularly given Cameron's own publicity campaign, with all its bashing of the evil atheists and secularists who are supposedly out to suppress the movie's vitally important message: This is not a movie about "saving" Christmas from some imagined War On Christmas on the part of secularists. Yes, there's a brief scene where one character whines a little bit about being oppressed by having to say "Happy Holidays" at work, but it's played for laughs (which never arrive). No, the surprise is that this movie is aimed at rescuing Christmas from Christians who might grump that the holiday is too wrapped up in commercialism, that elements like Christmas Trees and Santa Claus detract from the emphasis on Jesus, and that the holiday itself is merely a medieval borrowing from pagan celebrations like Sol Invictus or Saturnalia.

Here's the plot: A terrifyingly festive character played by Kirk Cameron sits in the front seat of a car and explains the Truly Christian Meaning of all those things to a character played by the film's director, Darren Doane, who just isn't feeling the Christmas thing and has fled a big Christmas party for the confines of his car. This sad sack character -- who frankly is nowhere near the Christmas grump that Charlie Brown was -- is named "Christian White," and we are not making that up. Though the movie clocks in at a mere hour and 20 minutes, Cameron's Christsplaining seems to go on forever.

So we learn that Jesus really was born on December 25 (he just was, OK?), and that Christmas trees are definitely not adopted from pagan Winter celebrations, because the Bible is full of Very Significant Trees: in the Garden of Eden, the Tree of the Knowledge of Good and Evil brought about Adam's fall, and Jesus's crucifixion -- on a tree -- brought humanity's salvation! Never mind that neither of those biblical trees were Douglas Firs or Scotch Pines, there's just nothing pagan about Christmas trees, OK? Totally biblical. Also, Santa Claus is based on St. Nicholas of Myra, who attended the Council of Nicea, defeated the Arian Heresy, and was a badass right out of a Tolkien adventure, so don't go knocking Saint Nick. (Sadly, this movie being only about American Christmas, which is Best Christmas, Cameron doesn't attempt similar Christian apologetics for Krampus or Zwarte Piet, which is probably just was well -- while it might have been interesting to watch the logical contortions of fitting them into some kind of Biblical conformity, it also would have added another half hour to the movie. Finally consumerism is also good, because gifts make people happy, and why knock materialism when it was Jesus Christ Himself who chose to take a material form so that he could die for our sins? Are you going to insult Jesus's sacrifice by refusing to go shopping?

At last, Christian is filled with the holy light of Jesus and Christmas, returns to the party, and there is much forced merriment, including an incredibly awkward dance routine to a hip-hop cover of "Hark The Herald Angels Sing" that compares unfavorably to the dance stylings of the Torrance Community Dance Group. Then everybody hugs and is happy, and there's a credit sequence with the least funny outtakes ever, and a beatboxing coda that you get the feeling could have lasted for another hour or two. God help anyone who buys the Blu-Ray, because you know it's going to be in the extras.

And so we are left with our original question: Worst Movie Ever? Probably not -- While Saving Christmas is indeed a terrible movie, it's just not spectacularly bad enough to take the title. But it definitely belongs near the top of any list of the worst. We are nervously awaiting the sequel, in which we learn that the Easter Bunny and pastel colored eggs are precisely what God had in mind to commemorate the Resurrection.