Is Our National Legislative Sh*tmuffin Of The Year Ted Cruz? We Will Give You Two Guesses And The Answer Is Yes 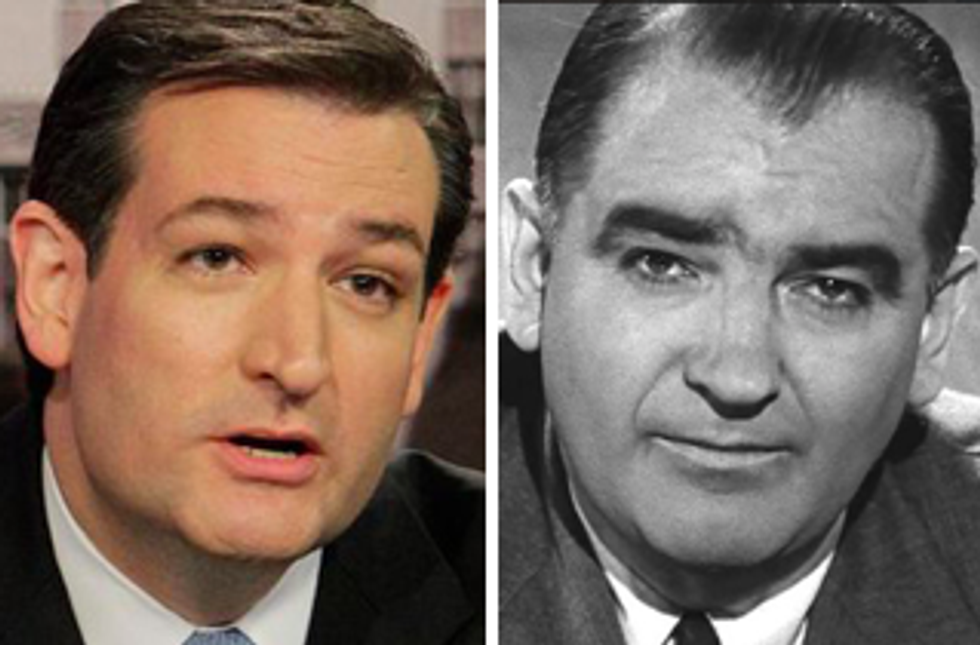 Yes, yes, we know: you thought it was going to be Louie Gohmert. There is no disputing it -- the man really is the dumbest piece of fecal-infused dough in Congress, and that is really saying something. But the thing is, Legislative Shitmuffin of the Year is more than just a yardstick of dumbth. It is, rather, an all-around honor, a recognition of the member of the legislative branch who has done the most to make America a shittier place. And ol' Louie, for all his dumbshittery, has just not accomplished much of anything, thank god. Now Sen. Rafael Edward "Ted" Cruz -- there is a man who has truly done some serious fuckery to his adopted nation (America, not Canada, where he is actually from), plunging the entire U.S. government into a cesspit full of exploding foamy pigshit for 16 days, then climbing out of the steaming wreckage, pointing proudly at the mess, and beaming, "Lookie what I did!"

While Cruz's brilliant Obamacare-killing maneuver of shutting down the government is of course the primary reason for this honor, it is not the sole one. He has been a source of odiferous nastiness since taking office, frankly. Pretty much literally, as his baby was a nose-picking jerk to Old Handsome Joe Biden. By February, Cruz was already getting compared to Joe McCarthy for an old assertion -- which he still believed was "absolutely correct" -- that in the 1990s, Harvard Law School was crawling with genuine communist subversives who would have loved Obama. By March, he was already talking publicly about shutting down the government as a brilliant strategy.

And then the freshman senator explained the Second Amendment to Sen. Dianne Feinstein, using little-bitty words. She did not especially care for it, as she knows a thing or two about both the Constitution and about what guns can do, seeing as how she was first on the scene when Dan White murdered San Francisco Mayor George Moscone and Supervisor Harvey Milk:

But it sure is nice that Ted Cruz explained the Constitution to the little lady.

Cruz dicked his way through the summer, making friends and influencing his own visibility on Fox, and we also learned that his father was even crazier than him.

Then came September, and Cruz's wish that every state could be represented by two Jesse Helmses in the Senate. And by then, we were all just, yeah, that's Ted Fucking Cruz all right. By the time he got to his Epic Not-A-Filibuster, we were largely just reduced to holding our bleeding ears and wishing for the whining to stop. The shutdown happened, thanks to the new Speaker of the House of Representatives, Sen. Cruz. He completely missed the point of a children's book about not rejecting things until you've given them a try. After a shutdown that cost billions, he got a standing ovation when he returned to Texas. And despite having a law degree and lecturing people who have been in the Senate 20 times as long as he has about the Constitution, he thinks a TV network making a private staffing decision about someone who embarrassed them is "the thought police censoring the views with which they disagree." And we just seem to be stuck with the little bastard.

There were, of course, many other nominees for Top Shitmuffin: Lee Terry and Renee Ellmers, who whined about how they needed their salary during the shutdown -- and then Ellmers' husband kind of let his AR-15 get stoled. Markwayne Mullin, who used the summer recess to make war on the poors and warn of $20 anus burgers if the minimum wage ever increases. Texas Rep. Michael Burgess, who rediscovered the phenomenon of masturbating fetuses, lost since it was imagined in an old SNL skit. Or Steve Stockman, who in a single term since returning to Congress has become quite the rodeo clown. And of course dumb as shit Louie Gohmert, who will always be a contender. But these also-rans will just have to accept their loss and move on.

Except for Darrell Issa, who we hear has already announced hearings to investigate why we didn't choose him.