Is That A Dick In Michele Fiore's Cop Boyfriend's Pocket, Or Is He Going To Shoot Her? 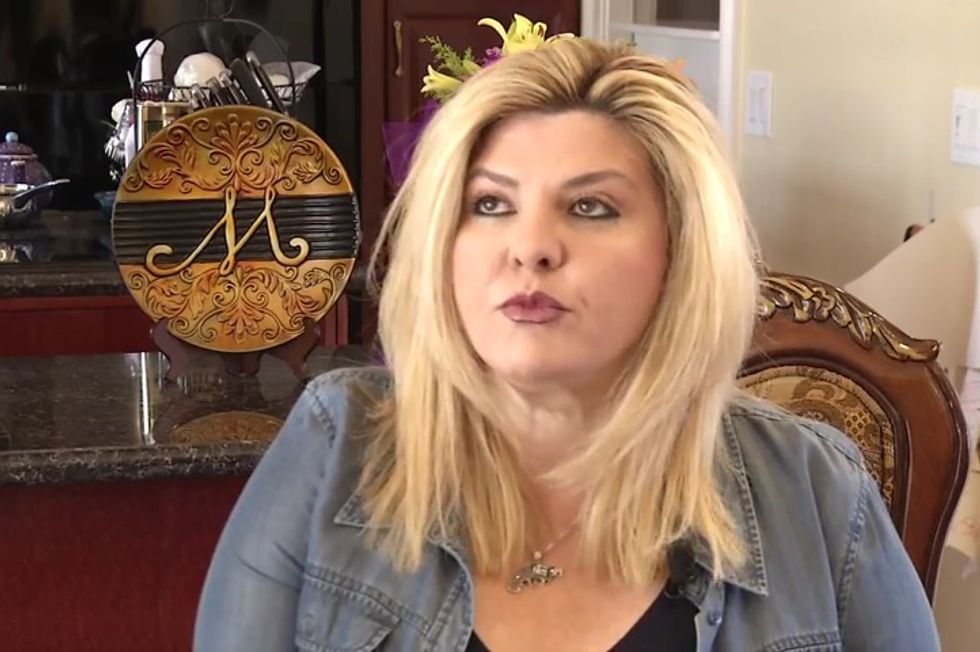 Super smart Nevada Assemblywoman and actual candidate for Congress Michele Fiore caused a bit of a stir last week when she said in a TV interview that it's a really good idea to draw your gun on cops if they point a gun at you, because self-defense. Well! That is not what she meant at all; that is not it, at all. So in an interview that aired Monday, Fiore sat down with KTNV reporter David Schuman to clarify she would never, ever draw a gun on REAL law enforcement officers, only on the fake wannabe cops who work for the federal government, who actually are not law enforcement officers at all because she says so.

Fiore carefully explains the original ThinkProgress story on her comments got it all wrong: she'd only pull her gun on Bureau of Land Management agents, who she says have no real authority:

We were talking about the BLM, which [rolls eyes] -- the more and more I learn about the BLM, they’re not federal officers, but we were calling them officers, we were calling them officers of the law -- and they are not. What they are, what the BLM is, is they are wannabe cops, untrained and rogue agents. The BLM is nothing more than a bureaucratic agency of terrorism that terrorizes Americans, especially ranchers. They literally have waged a war on all of our rurals and all of our ranchers.

Therefore when KLAS reporter Steve Sebelius asked Fiore about pulling a gun on "a duly authorized law enforcement officer who is just out there doing his job," and Fiore replied that of course she'd never point a firearm at an officer of the law, "unless they pointed their firearm at me," she was only referring to the fake cops of the BLM, who are not even legitimate law enforcement officers, according to the highly trained legal mind of Michele Fiore. Duh. Stupid lying liberals!

In the very best "balanced" news coverage, KTNV's Schuman does at least do some minimal fact checking, although he frames it as a difference of opinion:

Fiore calls them "unofficial wannabes," but the U.S. Department of the Interior website says differently. [link added by Wonkette]

The page says, "The BLM fields a force of approximately 200 Law Enforcement Rangers (uniformed officers) and 70 Special Agents (criminal investigators) who enforce a wide range of laws and regulations in the prevention, detection, and investigation of crimes affecting public lands resources."

So, you know, that's just like their opinion, man. And the opinion of the federal courts, which haven't yet seen fit to invalidate arrests by BLM rangers, no matter how much Michele Fiore and Ammon Bundy insist the federal government can't own land, so the BLM can't enforce laws on federal land.

But the really important thing to know is that Michele Fiore knows she'd never have to draw a gun on a Las Vegas cop, because she always obeys the law, and any officer that might approach her with a drawn weapon is merely mistaken, so she'd be cool and comply with the cops, who'd only pull a gun on her if they had a really good reason:

If a dispatch call goes out and says, you know, "We're looking for a murder victim [sic] driving a silver four-door Jag, you know, with a license plate with 'GUNS' on it," you know, so, that'd be my car! And if he was literally pulling me over suspect [sic] thinking that I was a murder suspect, his gun might be drawn, which would be okay.

A Jag, henghhhh? Guess she saved up a whole lot from her (alleged) Medicaid frauding before her grifty home-health company was shut down because she never paid her taxes.

Fiore has another very good reason not to fear the real cops of the real Metro police, because she's boning one. As RawStory puts it, ever so delicately,

She laughed at the idea that “real law enforcement” from Metro police would ever point their guns at her, saying that she had an “unofficial romantic friend” on the force.

“Metro is not going to be pointing a gun at me, period,” Fiore said. “You know, if any of our Metro police officers are pointing anything at me, it definitely isn’t their gun.”

She smacked her lips suggestively but declined to offer specifics about this “romantic friend.”

“I’m a public figure, and I don’t think exposing a lover is the right thing to do,” Fiore said.

Not that we have a problem with private sexxytimes, but your cop fuckbuddy is not necessarily the best source of legal information. We'd also point out that not all private citizens are afforded the protection (and apparent constant arousal) of the police force thanks to having a fuckbuddy on the force.

Still, it's an idea that might be adopted by folks seeking to reduce police violence against unarmed people: Become friends with benefits with your local LEO to protect yourself. It could bring a whole new meaning to the slogan "Fuck The Police."