Is This What Ivanka And Jared Listen To While They're Boning? Gross. 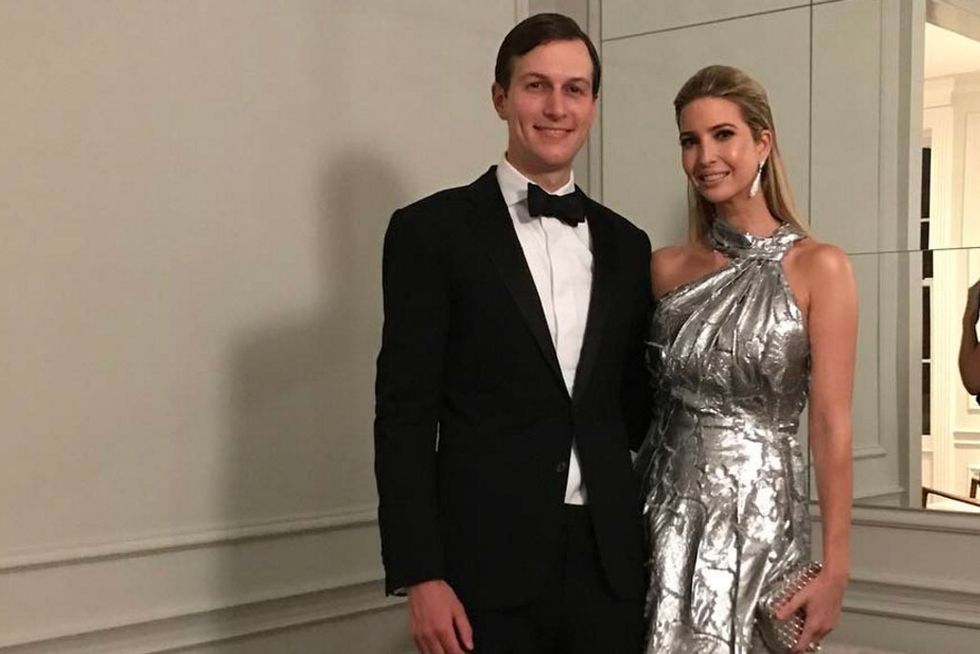 Fuck the Russia investigation, because Ashley Feinberg at Huffington Post has done some REAL DETECTIVE WORK and found the Spotify playlist Ivanka and Jared listen to while they are boning, maybe possibly allegedly. It is 21 minutes long, which we imagine is about how long it takes for them to bone, from the moment Ivanka looks at Jared and says "c'mere" to the very end, when Jared falls off the bed and bangs his noggin. Here's the playlist. Please try not to become too sexually aroused by it, as you are in public right now.

She also notes that Ivanka made this playlist 10 days before her wedding anniversary, so it stands to reason it was just on her to-do list. Here is how Feinberg describes these sex songs:

The playlist evokes motionless, antiseptic coitus. It evokes two Tide pens in a plastic sale tub. It evokes Lysol wipes. It evokes the smooth, genderless slopes of a couple of undressed dolls. This is sex music only in the sense that two pages pressed together in a new Williams Sonoma catalog is sex.

The John Legend stuff is OK. We like him. Yr Wonkette even used to sing the "Ordinary People" song back when we played at piano bars and stuff! Ivanka and Jared are very "ordinary people" (and also very poor), so we understand why they like that song. We're going to guess the Legend songs (nine minutes) are the "foreplay" part of the sexxxytime.

Next up is the James Blunt song, which in our expert opinion is the most annoying fucking song in the entire world, so we would not be surprised if it is Javanka's favorite thing to listen to during the most FEVERISH AND VIOLENT section of their probably very boring sexing. Listen and tell us we are wrong:

Can't you just see Jared and Ivanka doing big 'gasms to each other to the dulcet sounds of James Blunt's naked falsetto yelping? Yes you can, and now you can't unsee it.

And then there is Adele. We regret to inform you that we have an unpopular opinion about Adele, and it's that she is not that great. "When We Were Young" is a decent song, though. It includes these lyrics:

My God, this reminds me

Of when we were young

Awwwwww, this the part where Ivanka and Jared cuddle afterward for exactly four minutes and fifty seconds. They hold each other and think about WHEN THEY WERE YOUNG and Daddy Pussgrabby wasn't the most unpopular president in history and the whole family wasn't under investigation for a whole shitload of crimes, some of which involve colluding with an enemy power to steal an election. ALL THE NOSTALGIC FEELS!

And then it's over, just as quickly as it began, and if Jared wants to do it again, he will have to call Ivanka's assistant and get another bangin' P-in-V lovemaking session on the calendar. Does mid-November sound good? Let's just go ahead and pencil that in.

We should probably end this post now, due to how Ivanka 'n' Jared's sex playlist has made you feel so randy you need to retire to your bunk. POST OVER, and YOUR TURN, it is OPEN THREAD.