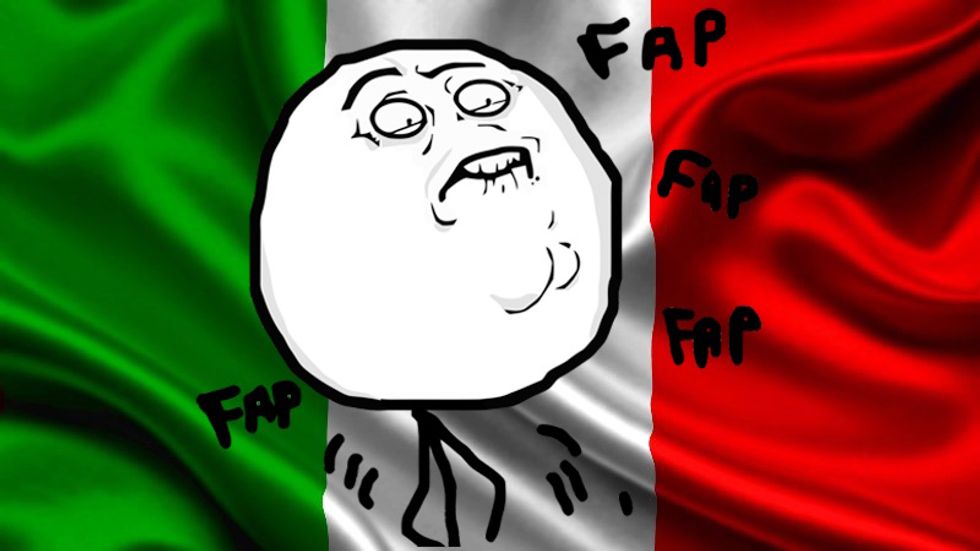 This can't possibly turn out well...

Identified only as Pietro L, the man had been convicted after he was seen “taking out his penis” and “practising autoeroticism” in front of students at the University of Catania campus.

A local prefect and an appeals court had agreed the man should pay a fine of €3,420 (somewhere between three and one million dollars in real money), and be sentenced to three months in prison to think over what he'd done to get himself into such a sticky legal predicament. Ah, but not so fast, said the Italian Supremes in their rendition of "Stop! In the Name of Self-Love":

[S]upreme court judges said that a recent government reform meant “the act is not included in the law as a crime”.

In doing so, the court has eliminated the criminal aspects of sentencing for obscene acts in public places.

The case of Pietro L will now go back to the Prefect of Catania to be sentenced again. La Corte di Cassazione ruled the man must be given a fine between €5,000 and €30,000, with the exact figure to be determined by the local court.

Aha -- so the Court of Calzones isn't saying it's perfectly OK, just that offenders can only be fined -- a hell of a lot -- but not jailed. Sounds like they're determined to give ol' Pietro a fair shake. Also, the court stood on precedent, after which they no doubt rinsed their shoes:

Huh. Which of course raises the natural question of what former Prime Minister Silvio Berlusconi has been doing with himself since he was forced out of office in 2011. Clearly, helping with justice reform.

That’s not true, according to the secretary of information at the Indonesian embassy, who told The Guardian the maximum sentence under Article 281 of national law was 32 months in prison.

In conclusion, this song from Monty Python's The Meaning of Life, which applies in the UK but not, now, in Italy: