It's A Fuck-Tussle Of I'M IN CHARGE HERE At The Consumer Finance Protection Bureau! 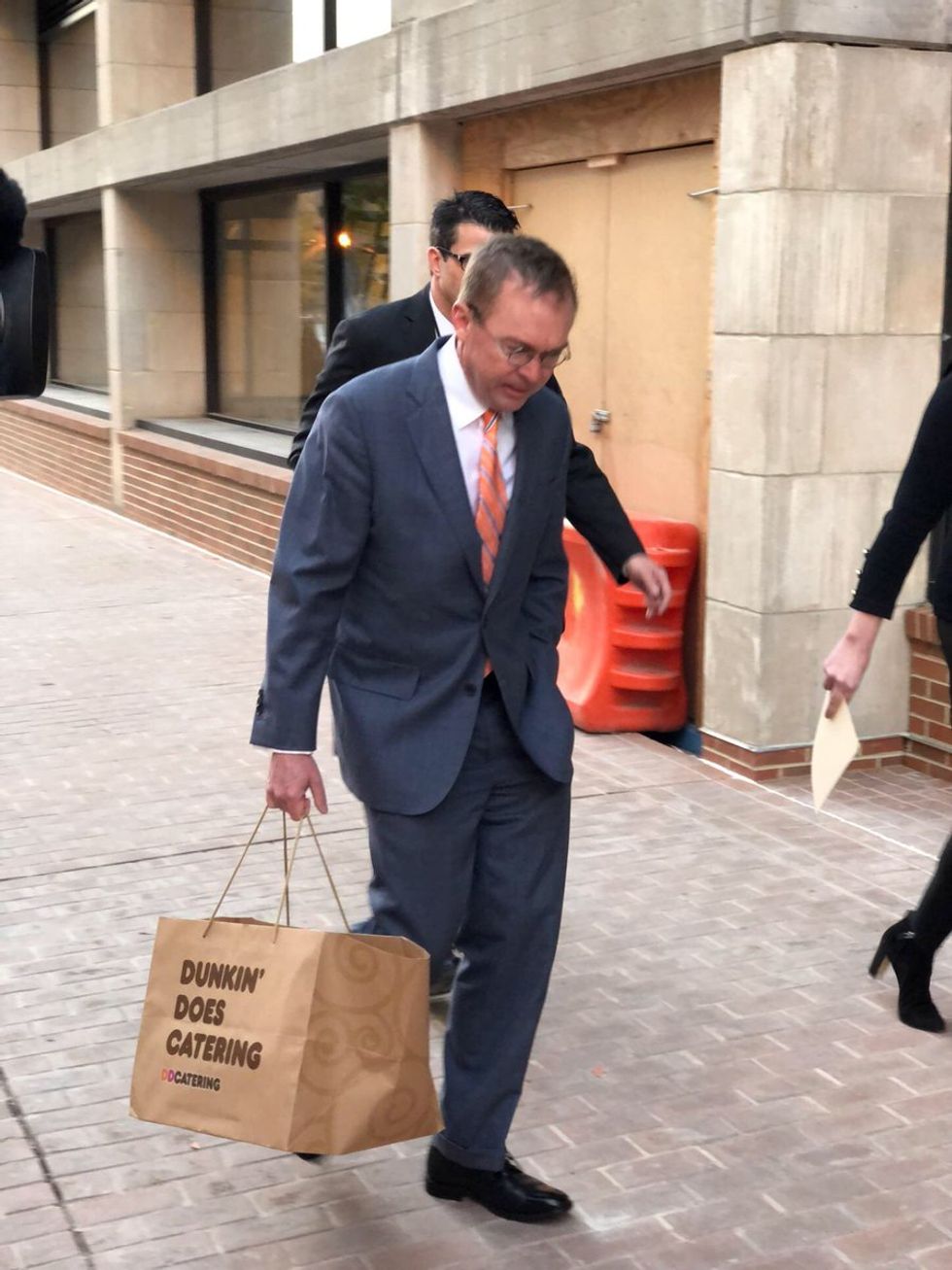 Shit's getting weird at the CFPB, y'all! Friday afternoon, Richard Cordray, director of the Consumer Finance Protection Bureau, submitted his resignation and named his deputy Leandra English as Acting Director. The White House immediately shouted, NUH-UH, Donald Trump is letting Mick Mulvaney, director of the Office of Management and Budget, be also, too acting director of CFPB, so there! The Attorney General obediently drafted a legal memorandum saying that Donald Trump does too have the right to install a hack as director, while English filed suit last night in DC District Court to assert her right to the position. This morning Mulvaney showed up at the CFPB with Dunkin' Donuts, not Starbucks like some Christmas-hating queer elite, and installed himself in the director's office. He's busily murdering consumer protections as you read this. HOORAY!

Naturally, Donald Trump and the rest of the GOP bullshit squad spent the weekend crapping on the agency. They're real short on specifics, but they want you to know that the CFPB is ONE BAD HOMBRE!

Lindsey Graham went on CNN's State of the Union to tell some lies about the poor banks crippled by DC bureaucrats stopping them from screwing consumers.

In terms of the agency, it's the most out-of-control, unaccountable federal agency in Washington, really no oversight at all. They can get into everybody's business. I don't think they add much at all to consumer protection. They sure add a lot to increasing costs for midsize banks throughout the country that had nothing to do with the financial collapse.

Here, look at this sad chart from an October MarketWatch article entitled "Bank Stocks Are Soaring, But Now It’s Time To Go For Quality."

Cry me a damn river!

So, what even is the CFPB?

Congress created the CFPB under the Dodd-Frank law in 2010 after the global financial meltdown in 2007-08. Because a federal agency to investigate credit card, mortgage and student loan violations by banks seemed like a good idea when Democrats were in charge. The CFPB has gotten $12 billion in relief for American consumers, including most recently collecting $3.75 million from Citibank for overcharging interest and late fees to student loan borrowers. But that doesn't really fit in with the GOP platform of allowing companies to rape and pillage at will, so Republicans have been gunning for the agency since it was in utero. And Mick Mulvaney, who called CFPB “the very worst kind of government entity," is just the guy to take a sledgehammer to consumer protections.

It's a complicated legal dispute, but it largely boils down to (1) Does Dodd-Frank supersede the regular law on federal vacancies, and (2) Is Cordray "absent or unavailable," or does his resignation mean the position of CFPB Director is vacant? Let's Lawsplore!!!

It's important to understand that Republicans are desperately trying to postpone public confirmation hearings for Cordray's replacement. They do not want to give Senate Democrats a chance to question whatever banking lobbyist the Koch brothers dig up, and they'd prefer to stab CFPB in the heart before the public gets mobilized to try to save it. Trump will get his nominee through the Senate, but he's dodging the nomination process so he can kill the agency's active investigations without publicity.

The 1998 Vacancy Reform Act (VRA) allows the president to shift someone who has already been confirmed by the Senate from one post to another. (That's why there's all that speculation that Tillerson will quitfire himself at State and be immediately replaced by Mike Pompeo, who was already confirmed by the Senate to head the CIA.) Mick Mulvaney already has a full-time job at OMB, but he is a guy who consistently sides with corporations and has been confirmed by the Senate. So Republicans are going to let him do double ratfucking duty at OMB and CFPB. The only issue is this pesky "unless" in the VRA, which says the statute doesn't apply if another law specifies how a vacancy will be filled. And the Dodd-Frank Act, which created the CFPB, specifies that the Deputy Director "shall serve as acting Director in the absence or unavailability of the Director."

You Say Vacant, I Say Absent, And We're Both Lying!

Normally, Dodd-Frank (the DFA) would trump the Vacancy Reform Act -- it was passed later and as part of the enabling legislation for the CFPB. The attorney general is making an All Laws Matter argument that Trump gets to appoint Mulvaney because the VRA and DFA run concurrently. Which, seems like kind of a reach. On the other hand, Cordray and English are relying on a pretty broad interpretation of "absence or unavailability." Cordray isn't on medical leave, he quit. In short, the White House is making a pretty transparent end-run around Senate confirmation of a new director, but Cordray's attempt to name his own successor is a little hinky, too.

CFPB's in-house lawyer Mary McLeod agrees that Mulvaney is the new director, so, we'll just have to wait and see what the District Court says. Another week in Trumpland, another nasty spectacle of naked partisan hackery. In Washington, the swamp drains you!

UPDATED: The Intercept reports that Richard Engel, the lawyer who drafted the White House legal memorandum in support of Mulvaney's right to assume the post at CFPB, just so happens to have been a lawyer for a Canadian payday lender. And this payday lender, NDG Financial Corp., just so happens to have been cited by the CFPB for illegally collecting payments from American citizens. So until August of 2017, Engel was doing battle with the CFPB on behalf of a rapacious bank, and now he offers his unbiased legal opinion that Mulvaney can go in there and gut the agency.

Ye Gods! Another week of this crazy shit! Please contribute to the Wonkette Fund For Cheetos and Xanax!