It's A Good Friday For Values Voters To Feel Persecuted Again 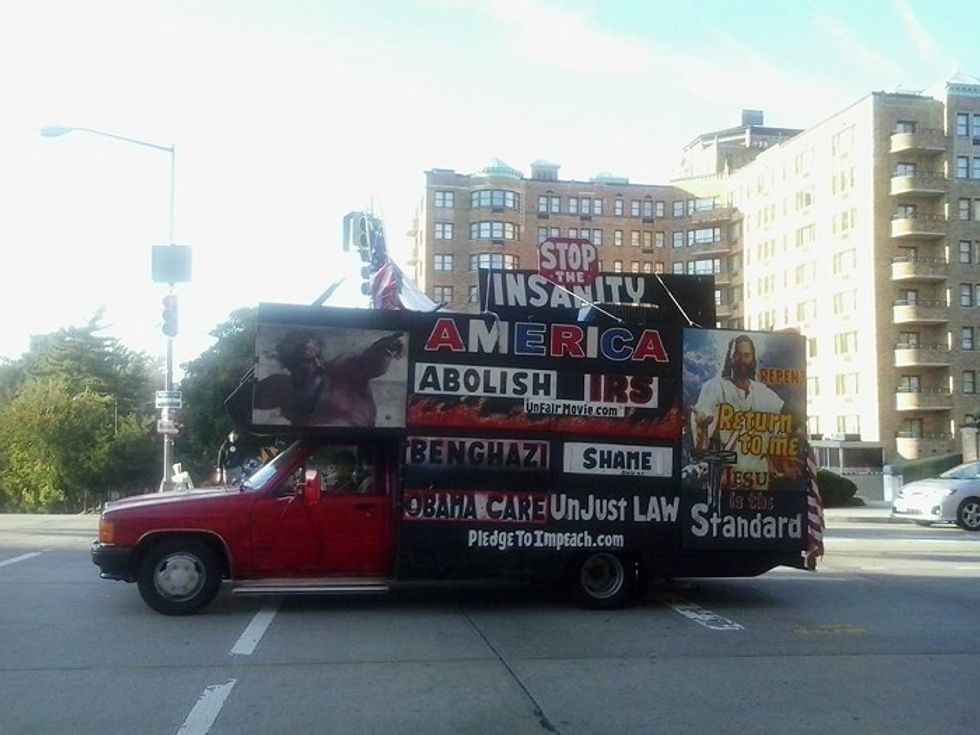 Outside the Values Voter Summit 2014/Photo by Beth Ethier

It's time for all the wingnuttiest Christianist wingnuts who will never be president to gather once again in D.C. to Biblesplain how President Obama is THE WORST, liberals have killed Jesus (again!), and it's hard out there in these American United States of Real America for an outraged white dude.

All your favorite whackadoodles will be there, including this list, via RightWingWatch, of all these fine upstanding and not at all batshit crazy people who believe America is Nazi Germany now:

Mike Huckabee. Former governor and presidential candidate Mike Huckabee agreed last year that it was “the truth” that bills introduced to prevent gun violence are just like what happened in Nazi Germany.

Jim Bob Duggar. In a speech to the 2013 Values Voter Summit, Jim Bob Duggar said his visit to Nazi concentration camps reminded him of the U.S., saying that the Holocaust is “where we are at in our nation.”

Also, too, Glenn "too crazy for Fox News" Beck will be there. Sens. Ted Cruz AND Rand Paul will fight over which one of them is the best possible candidate to not be elected president in 2016. We'll have Rick Santorum and Michele Bachmann, probably talking about The Gay because what else would they talk about? Special treat: E.W. "Ewwwwwwwww" Jackson, black teabagger favorite and 2013 Republican nominee for lieutenant governor of Virginia, who thought that whole three-fifths compromise was pretty excellent for black people, actually.

And of course Sarah Palin because OF COURSE SARAH PALIN. No word yet on whom she'll be brawlin.' We are hoping oh all of 'em, Katie!

We are sad to report that Dr. Ben Carson will not be there this year to tell us how "the worst thing that has happened in this nation since slavery." Apparently, he's busy deciding whether he will also be a contender for the 2016 race to not be president. Please run, Ben. Your nation's comedy writers need you!