It's The GOP Tax Bill Hokey-Pokey! 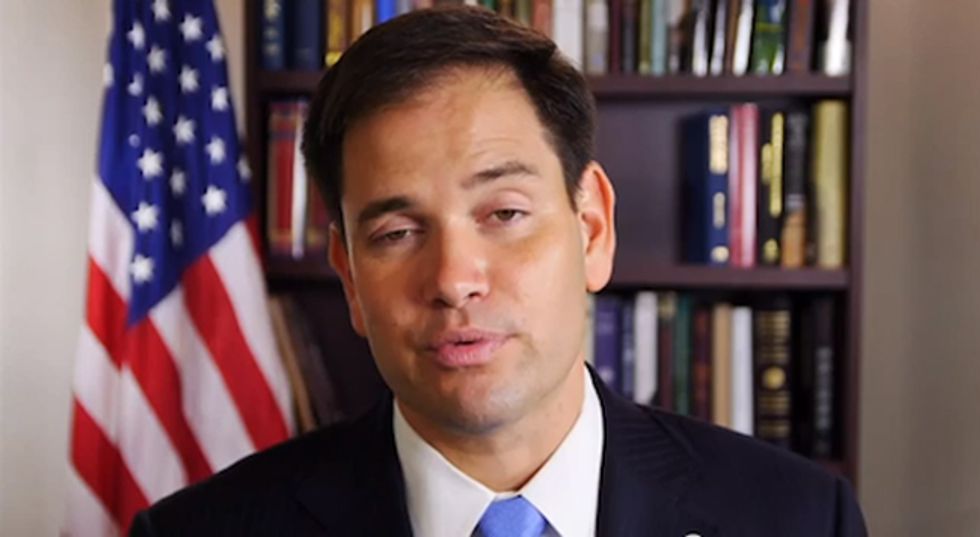 Wonkers might be wondering what is happening with the tax bill and the answer is Wonkette does not know and Congress does not know and maybe they have the votes in the Senate but maybe they don't because Marco Rubio is like "OMG CHILD TAX CREDIT" and if he doesn't have a backbone THIS time, he will never get to be our dashing young president, and he MUST know that right, he's not actually stupid, just a little bit of a HUGE PUSS, and he has been caterwauling ALL WEEK about how they would not "raise" the corporate tax rate from 35 percent to 22 percent to let single mothers on minimum wage get a child tax credit, but they WOULD "raise" the corporate tax rate from 35 percent to 22 percent to give millionaire couples a tax cut from 39 percent to 37 percent, but Marco Rubio is not good at keeping his spine in place it just keeps exploding out his back and running away (it's very messy), and Mike Lee is like "I DUNNO!" and Rand Paul is being a twat like he always is and what's Susan Collins doing, since she didn't get literally any of the things she demanded for her yes vote and does not get her turn to be the Zaphod Beeblebrox Most Important Person in the Universe like her old buddy Olympia Snowe was that time when we were all waiting on Scott Brown to fuck the ACA, is she going to be all fuck YOU and YOU and YOU you're cool, we don't know, and John McCain is in the hospital so maybe he won't be available, but maybe he will, same for poor old Thad Cochran in Mississippi, and Bob Corker WAS a no, but is he really a no, when he has a net worth of ALL THE MONEY and would see his taxes go down by MILLIONS, and what about Jeff Flake of Arizona who keeps being accosted by dying people -- that's gotta leave a mark -- and Mike Pence REALLY doesn't want to go to Palestine right now so he is like "I am here to break all the ties" and Donald Trump is getting ready to talk again about how it was "so close," 48 to 4, because Republican math means you only count the Republicans just like Republican lawmaking means the Democrats don't get to read the bill meanwhile in the House they are like "FINISHED POOPING ON THE TAX SYSTEM, COME WIPE OUR BOTTOMS" and they are being so successful at it that Paul Ryan is whining that he wants to retire (just as soon as he's cut Grandma Millie's Social Security) because can you imagine how mad everyone will be at him after they lose 720 seats in the midterms (#math, like 180 percent of all House seats), but maybe they are still negotiating, Devin Nunes is all "I took a break from rushing to the White House to tell the White House the information I got from the White House so I could 'sign the final bill'" and everyone else is all what final bill YOU talking about, Traity, because LITERALLY NOBODY KNOWS WHAT'S IN IT, just like LITERALLY NOBODY KNEW WHAT WAS IN THE SENATE BILL (but they passed it anyway so they could have "a win") but Americans are smart enough, this time, to know when they're being shit on so Ivanka Trump doesn't have to pay inheritance taxes, but hey, Donald Trump says everything is going great, just like he says even his worst enemies on the Demon-cratic side say NO COLLUSION WITH RUSSIA, NO COLLUSION, everybody just agrees because it is so obvious, and that is what is happening with the tax bill, so far as we can tell.