It's Three PM. Do You Know Which Armed Militia Whackjobs Are Guarding Your Children? 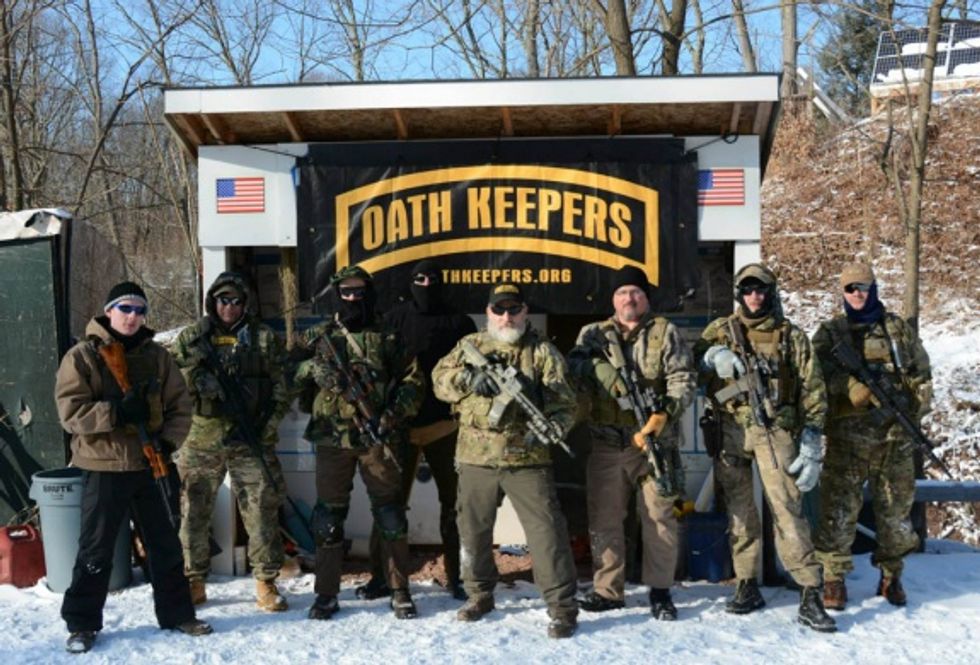 Happy news, everyone! Those dingbat protectors of liberty the Oath Keepers are fixin' to send a bunch of their AR-15-toting crackpot crack shots to serve as volunteer guards of America's public schools, whether America's public schools want them walking around nearby or not. These are the same fine crew of Constitutionalists, gun-humpers, anti-government militia yahoos, and (often) sovereign citizens who flocked to Bundy Ranch to have a nice armed standoff with federal law enforcement, offered to teach schoolchildren how to bum rush school shooters after Sandy Hook, called for John McCain to be strung up by the neck until dead or conservative enough, and flooded into southwest Oregon to protect a gold mine whose owner didn't want their help.

The Oath Keepers say they're a "non-partisan association of current and formerly serving military, police, and first responders" who simply want to keep fulfilling their oath to protect and defend the Constitution, though they may have some idiosyncratic ideas about what's actually in the Constitution, and their definition of "all enemies foreign and domestic" tends to be limited to Muslims in the former case, and liberals and elected government officials in the latter. They're mostly into gearing up for the coming breakdown of constitutional order, especially once Barack Obama declares himself supreme dictator for life, even if he's no longer technically in office. As far as their actual influence, it's hard to say -- they can rally a bunch of nuts with guns now and then, but sometimes they seem like a gun-toting version of the Westboro Baptist Church: expert at glomming on to whatever the far right is het up about at any given moment so they can build that all-important fundraising email list.

Head Oaf Stewart Rhodes joined two of the Top Oafs, David Codrea and Matt Bracken, for a webinar Monday night on how they'll be sending armed goons to stand outside schools, as documented on Twitter by JJ MacNab, a truly indispensable expert on All Things Extreme Wingnut. It seems the leaders were actually playing catch-up on this issue; one self-identified Oaf in Indiana, Mark Cowan, took to hanging around outside a public school in Fort Wayne, Indiana, late last week, with a handgun holstered on his hip and his trusty AR-15 in his car nearby. Cowan told local TV station WPTA that "about 100" of his militia pals were keeping an eye on high schools in Eastern Indiana alone, which doesn't sound like a crazy exaggeration at all. Don't ask him to name them; that would compromise OpSec, young man. He said that while the schools and teachers hadn't been made aware of these fine guardians, they had definitely told the police they're there. You bet. So stealthy they're invisible, like ninjas, HI-KEEBA! Here's Mr. Cowan talking School Security:

"These are kids. Ain't none of those kids in there allowed to carry a gun to protect themselves," he said. "There's one school resource officer... take a look at the size of this school, look at the size of your school where you're at. One officer ain't enough.

"If somebody comes to this school or another school where we're at, that school shooter is going to know, we're not going to play games... You come to kill our kids, you're dead."

"We understand he has a right to be out there, as he is not on our property, but we do not believe it adds to the safety of our students," Stockman said. "At North Side, as at all of our schools, we have security procedures in place. In addition, at North Side, we have armed police officers in the building every day."

Oh, yes, and Cowan does have a little old criminal record for a bit of a fight that was initially charged as involving a deadly weapon, but don't worry -- he pleaded to a lesser charge that doesn't keep him from his precious, precious guns, and besides, he said he was only keeping his grandkids safe anyway.

As to that little matter of schools not wanting Oath Keepers around, seeing as how they're kind of an armed bunch of malcontents who frequently state their willingness to go to war with the federal government in the name of the Constitution, Stewart Rhodes told Talking Points Memo, "Tough."

“If they don’t like it, too bad,” Rhodes said. “We’re not there to make people feel warm and fuzzy; we’re there to stop murders.”

“What I tell our people is don’t ask for permission,” Rhodes continued. “Let ‘em know what you’re doing and be as friendly as you can. But this is the reality we’re in right now.”

Rhodes does at least ask his militia pals to identify themselves as friendlies, with maybe a "long-range identifier" such as an orange safety vest, a sash, or possibly a Japanese schoolgirl kilt worn over their surplus-store camo (we may be improvising on that last; Crom knows they will too). They should also have a “close-range identifier” that can't be easily reproduced by -- get this -- impostors. Wouldn't want any FAKE militia dudes out there. He also asks volunteers to contact the police before they begin patrolling, to give them copies of their drivers' licenses and descriptions of their vehicles (including plate numbers) and what they'll be wearing. Presumably that's so police arriving on the scene of a mass shooting won't mistake the GOOD GUY in full camo and ballistic armor from the BAD GUY in full camo and ballistic armor.

Rhodes hyped Monday's webinar with an exciting video promising that his bunch of perfectly sane militia guys will post themselves outside schools until teachers are sufficiently armed to repel any armed intruder on their own.

This is what we have to do. If you don't do this, there's going to be more dead kids. This is the reality.

Yup, that's reassuring. Rhodes also praised the armed neighbor who got into a gunfight with the Texas church killer for having "stopped the killing," although if you want to get technical about it, that neighbor only started shooting at the bad guy after he'd killed 26 people inside the church, and was leaving the scene as cops were almost there. (But who knows, maybe he would have gone on to kill everyone in Texas!)

The webinar itself was apparently one hot mess of great rightwing hits that only occasionally touched on protecting kids in schools. One of the featured speakers, Matt Bracken, seems like one hell of a great guy:

He accurately predicted Europe's suicide by Muslims! If Europe is dead, can we have their stuff, or do we have to take it from the Muslims? He's also written bad self-published (we think) post-apocalyptic fiction, so we may just have to get our hands on some of that for you, the readers.

The other speaker, David Codrea, is also an expert on the Second Amendment, and once wrote for Guns & Ammo, so he's legit AF. NacNab notes Codrea has interesting legal theories!

Codrea claims that the right to bear arms in this country is not dependent on the US Constitution. He claims that everyone can own firearms even if the 2nd Amendment is repealed.

While he was at it, he said the Parkland shooting survivors are the "rock stars of the gun grab world," and "the enemy." See, it's important to have a threat profile on the bad guys: Kids who want to stop the sale of semiautomatic assault rifles.

He also predicted -- and this is very important for your volunteer school guards -- that the next mass killing in America will be perpetrated by people crossing "our unprotected southern border," or maybe, as Bracken later added, possibly by the "thousands of known jihadis" that law enforcement is doing nothing to protect us from. School shootings, they agree, are actively being allowed by the government so they can eventually seize all your guns.

Another Bracken goody: He advised listeners that if the government unconstitutionally declares them mentally unfit and comes to take their guns, they should surrender some antique guns, hide their real arsenal and consider them "the enemy." It's a great point, because when the Day of the Rope arrives, you want to have your list of traitors handy.

Then Stewart Rhodes Himself came on, complained that Democrats were stirring up insurrection over immigration, and warned that

we're entering into a "cold" coup against the administration and that it's about to turn into a hot battle.

That got Bracken all hot to talk about his fanfic for the coming civil war in which liberals will be wiped out. MacNab summarizes beautifully:

Bracken believes that the "patriots" will win a civil war because they have a lot of practice hunting and gutting 200 pound animals. You can't beat a "million cells" with one armed person in each cell.

The phrase "cultural Marxist social justice warrior" was used so many times in this 2 hour presentation, it would have made for a deadly drinking game.

The convo has wandered off into apocalyptic survivalist fantasies. "A lot of people are just going to start shooting."

So yes, that's where our discussion of Protecting the Children ended up: Apocalyptic wasteland warriors and people who "just start shooting," so we all need to be ready for THAT.

Update: Oh gosh, what could possibly go wrong with this idea, outside everything we wrote about above?

One idea @RepMarkMeadows floats on gun control: tax credits for volunteers — like retired law enforcement — who want to offer security for schools.