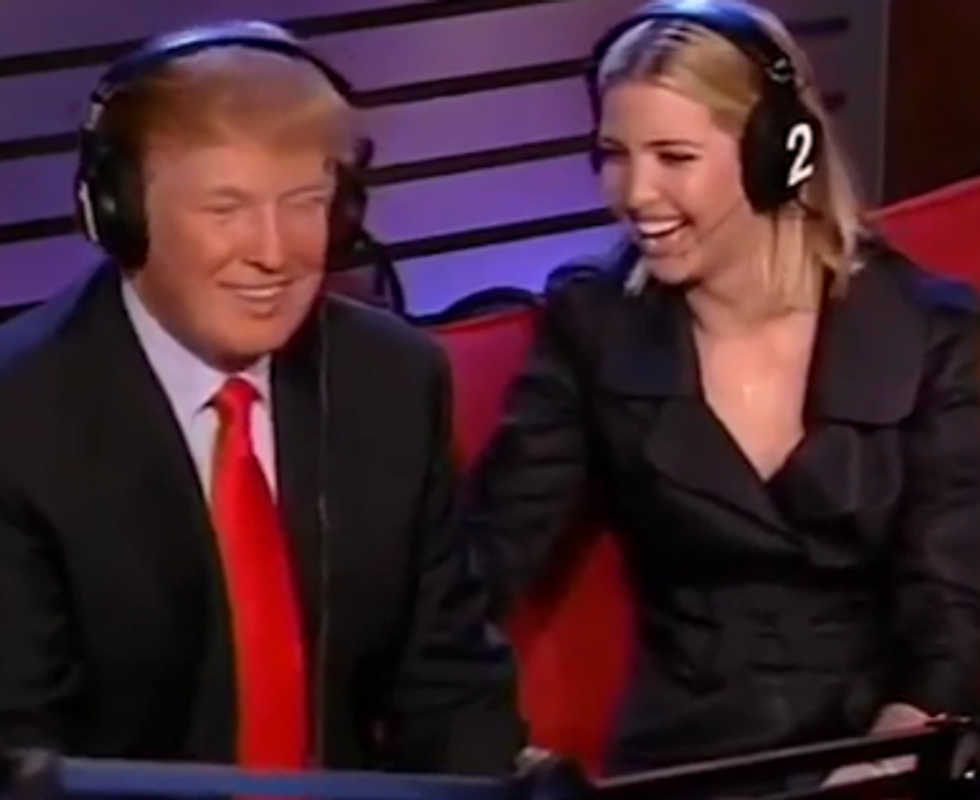 Maybe she will just pick herself.

It has been decided by Acting First Lady Ivanka Trump that President John Kelly is mean and bad, and she would like to find a new person to be Daddy's so-called "Chief Of Staff"/adult daycare babysitter. Gabriel Sherman reports at Vanity Fair that Daddy has been upset lately by how President Kelly keeps going on TV and subtly alluding to how Daddy is very stupid and has a bad brain and doesn't understand literally anything. For example:

Last week, Kelly reportedly infuriated Trump when he told Fox News that Trump had “evolved” on his position to build a southern border wall. Kelly further catalyzed Trump’s ire when he told Democratic lawmakers that Trump was “uninformed” when he made his campaign promise to build the wall. [...]

“The more Kelly plays up that he’s being the adult in the room -- that it’s basically combat duty and he’s serving the country -- that kind of thing drives Trump nuts,” a Republican close to the White House said. In recent days, Trump has fumed to friends that Kelly acts like he’s running the government while Trump tweets and watches television. “I’ve got another nut job here who thinks he’s running things,” Trump told one friend, according to a Republican briefed on the call. A second source confirmed that Trump has vented about Kelly, mentioning one call in which Trump said, “This guy thinks he’s running the show.”

UNFAIR! Donald Trump does not want a chief of staff who runs the country and also acts like he is running the country. Trump needs somebody who will let him have Executive Time 23 hours a day to play with his poo and his Twitter, but who, when asked, will pretend like "President Trump" is "busy" and "strong" and "the best damn camel identifier in the whole White House."

Also, everybody else in the West Wing hates President Kelly and calls him the "Church Lady" because he never lets anybody have any pizza parties or sneak up to the roof to smoke drugs, which makes serving the American people booooooooooring. KELLY GOTTA GO.

So it is that Trump is quietly chit-chatting to people about who should replace President Kelly, assuming it ever becomes politically tenable for somebody to replace President Kelly. (It's not like this White House has a long history of people peacing out after exactly eight minutes of trying to work at Camp Moron or anything.) Vanity Fair notes that all of this is, at this stage, a dream in the president's heart, like firing Jeff Sessions or having normal sized hands.

So it is also that Ivanka Trump is trying to run shit again, because if Ivanka Trump's time in the White House has taught us anything, it's that she runs shit:

Ivanka is also playing a central role in the search, quietly field-testing ideas with people. “Ivanka is the most worried about it. She’s trying to figure who replaces Kelly,” a person who’s spoken with her said.

What about Jared? He probably can handle yet another job, on top of curing opioids and saving the Middle East. Or young Arabella Kushner! She is about kindergarten age, so she is on the president's level, plus she speaks Mandarin, so she's probably well-positioned to make Grandpa look like less of A Idiot next time President Xi comes a-callin'.

What about Hope Hicks? Tom Cotton? Kevin With The Red Starbursts? A funny clown in a Big Mac costume? Stephen Miller? Trump does whatever he says anyway, because they are in love.

Ooh! Ooh! Ivanka has idea! What about somebody by the name of ... IVANKA TRUMP?

We can hardly wait to see who gets to be chief of staff for less than six months once it's finally time for President Kelly to go. Really. You bet. Watching this White House fail upward is our favorite.