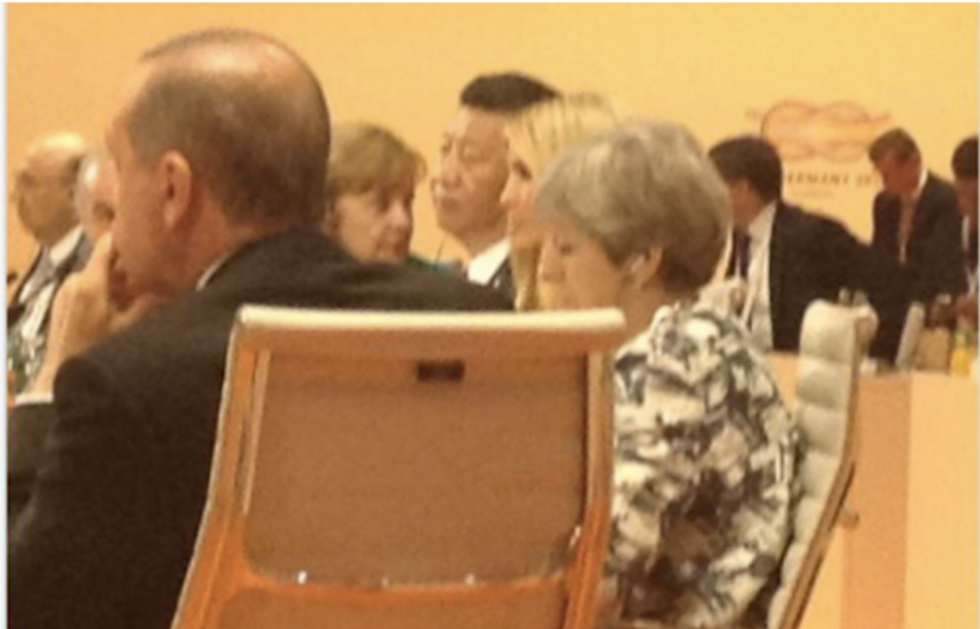 Early this morning, Ivanka Trump briefly sat in for her Daddy at a G20 session on “Partnership with Africa, Migration and Health,” while he got up to go do some other stuff he deemed more important than a session on “Partnership with Africa, Migration and Health.” Yes, she plopped her little butt right down next to Angela Merkel and Chinese President Xi Jinping, whipped out her Lisa Frank notebook and her pink feather topped pen and proceeded to Legally Blonde the shit out of the G20. Which some people think is weird, given the fact that she's his daughter and not an elected official, and isn't really qualified to do anything other than poorly manage a retail clothing line.

Attention was called to this when Svetlana Lukash, a Russian official, sent out a since-deleted tweet.

Now, it's fairly normal for ministers and legitimate advisors to step in for world leaders at these meetings while they step out and do other things. Those advisors, however, are rarely their own children, and are usually very qualified to be there. But, you know, Ivanka did a cameo on Gossip Girl once, and how is this all that much different?

And it's not just us crazy liberals either that think this is maybe a little weird, either! Now, I don't like doing the whole thing where we're supposed to pretend like Republicans also being appalled by something gives more credence to it being terrible -- but this tweet from former Bush strategist Matthew Dowd is pretty right on.

Yes, of course everyone would think it was bizarre if any other presidential children were sitting in at G20 meetings. That sort of thing is, well, "just not done." But here's the thing! This is actually all so much easier to deal with if you just pretend we're living in a monarchy now. It's sort of like we have a child king, and Ivanka is his regent. Like, he's basically Joffrey in Game of Thrones, and Ivanka is Cersei. Or he's like, Ivan the Terrible and Ivanka is his mom, or like, all the boyars that came after her after she got poisoned and died. Maybe? Sort of?

I don't know. I actually kind of think that if we just gave them crowns they'd be satisfied for a while and stop doing so many terrible things. Not even fancy crowns. Burger King crowns would do.

Ivanka was doing other stuff at the G20 too, of course, like joining Daddy at a session about "women entrepreneurs," perhaps in hopes of inspiring other women to start their own shoe collections devoted to ripping off better designers.

Wonkette is 100% reader supported! So be one of those supportive readers and click below to give us some money!