Jackie Is Lying, So We Can All Stop Talking About Rape Now 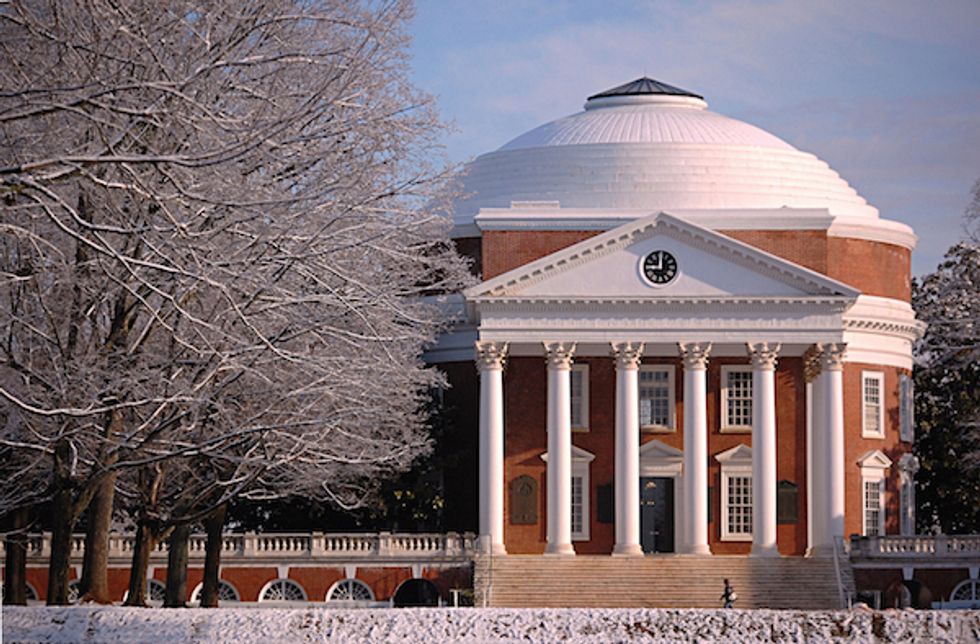 Here is everything you need to know about rape: it all comes down to a woman named "Jackie."

Jackie may or may not be lying about being gang-raped at a fraternity at the University of Virginia. But if she is -- and plenty of journalists are determined to prove that's the case -- then there's no reason for us to talk about rape, or the rape problem at UVA, which is under federal investigation, or the rape problem on college campuses, or the rape problem in America. Because if Jackie is lying, none of that matters.

The Washington Post dutifully set out to prove this story simply cannot be true, and it is awful proud of itself for doing so. It has forced Rolling Stone to issue an apology for trusting Jackie in the first place -- which it oh-so-graciously corrected later to clarify that it was at fault for its failure of journalistic due diligence -- and to pronounce that there are discrepancies in Jackie's story. And because Jackie's story contains discrepancies, we can apparently ignore everything else in the article: the studies, the investigations, the on-the-record quotes, and certainly other women's stories.

The Post's original indictment of Jackie's story, and of Rolling Stone, contained this "discrepancy":

The Washington Post has interviewed Jackie several times during the past week and has worked to corroborate her version of events, contacting dozens of current and former members of the fraternity, the fraternity’s faculty adviser, Jackie’s friends and former roommates, and others on campus. Fraternity members said anonymously that the description of the assailant doesn’t match anyone they know and have been telling others on campus that they did not have a party the night of the alleged attack.

That version of the story doesn't exist at the Washington Post anymore, although you can still read it here.

That's where you can also read the "clarification" that was eventually added, but also no longer exists:

An earlier version of this story did not properly attribute in one instance a statement about whether Jackie had met the man she named to friends as one of her attackers. The story has been updated.

What was that earlier, earlier version?

So it's fair to conclude, as so many have, that none of the reporting, even the parts that aren't about Jackie, is relevant or true or worth discussing. Even Jackie's friends don't believe her now. Thus, the whole story is a hoax. It must be. That's the only reasonable explanation, and it's the only lesson worth learning in this teachable moment, not about rape (except that it's all a myth because all supposed victims are proven liars like Jackie), but about, surprise!, ethics in journalism.

Jackie is lying, and that's all that matters. Nothing to see here. Move along. The end.

But before we put all this nastiness that didn't even happen behind us, a brief P.S.:

The University of Virginia is one of the 86 schools now under federal investigation, but it has more reason to worry than most of its peers. Because, unlike most schools under scrutiny, where complaints are at issue, UVA is one of only 12 schools under a sweeping investigation known as "compliance review": a proactive probe launched by the Department of Education's Office of Civil Rights itself, triggered by concerns about deep-rooted issues. "They are targeted efforts to go after very serious concerns," says Office of Civil Rights assistant secretary Catherine Lhamon. "We don't open compliance reviews unless we have something that we think merits it."

The reporting didn't start with Jackie; it started with the University of Virginia as one of nearly a hundred examples of colleges that so egregiously handle cases of rape and assault. But if Jackie is lying, the investigation doesn't matter. We needn't talk about that.

We don't know which parts of the report to believe, but because Jackie is lying, presumably we should ignore this as well:

We walk the curving length of tree-lined Rugby Road as they explain the scene. The women rattle off which one is known as the "roofie frat," where supposedly four girls have been drugged and raped, and at which house a friend had a recent "bad experience," the Wahoo euphemism for sexual assault. Studies have shown that fraternity men are three times as likely to commit rape, and a spate of recent high-profile cases illustrates the dangers that can lurk at frat parties, like a University of Wisconsin-Milwaukee frat accused of using color-coded hand stamps as a signal to roofie their guests, and this fall's suspension of Brown University's chapter of Phi Kappa Psi – of all fraternities – after a partygoer tested positive for the date-rape drug GHB.

We don't know if the Washington Post has reached out to those women to determine whether their stories are credible either. And as for those studies about the prevalence of rape by fraternity members? Because we cannot believe Jackie, certainly we cannot believe the statement from UVA's former dean John Foubert:

"UVA is more egregious than most," says John Foubert, a UVA dean from 1998 to 2002, and founder of the national male sex-assault peer education group One in Four. "I've worked for five or six colleges, and the stuff I saw happen during my time there definitely stands out." For example, Foubert recalls, in one rare case in which the university applied a harsh penalty, an undergrad was suspended after stalking five students. Heated discussion ensued over whether the boy should be allowed back after his suspension. Though the counseling center wanted him to stay gone, Foubert says, the then-dean of students argued in favor of his return, saying, "We can pick our lawsuit from a potential sixth victim, or from him, for denying him access to an education."

Nor should we give any consideration to the reference of a 2002 study by psychologist David Lisak:

In his study, Lisak's subjects described the ways in which they used the camouflage of college as fruitful rape-hunting grounds. They told Lisak they target freshmen for being the most naïve and the least-experienced drinkers. One offender described how his party-hearty friends would help incapacitate his victims: "We always had some kind of punch. . . . We'd make it with a real sweet juice. It was really powerful stuff. The girls wouldn't know what hit them." Presumably, the friends mixing the drinks did so without realizing the offender's plot, just as when they probably high-fived him the next morning, they didn't realize the behavior they'd just endorsed. That's because the serial rapist's behavior can look ordinary at college. "They're not acting in a vacuum," observes Lisak of predators. "They're echoing that message and that culture that's around them: the objectification and degradation of women."

If Jackie is lying, then certainly the history of sexual violence at UVA, and specifically at Phi Psi, are irrelevant.

You can trace UVA's cycle of sexual violence and institutional indifference back at least 30 years – and incredibly, the trail leads back to Phi Psi. In October 1984, Liz Seccuro was a 17-year-old virgin when she went to a party at the frat and was handed a mixed drink. "They called it the house special," she remembers. Things became spotty after Seccuro had a few sips. But etched in pain was a clear memory of a stranger raping her on a bed. She woke up wrapped in a bloody sheet; by rifling through the boy's mail before fleeing, she discovered his name was Will Beebe.

Incredibly, 21 years later, Beebe wrote Seccuro a letter, saying he wanted to make amends as part of his 12-step program. Seccuro took the correspondence to Charlottesville police. And in the midst of the 2006 prosecution that followed, where Beebe would eventually plead guilty to aggravated sexual battery, investigators made a startling discovery: That while at Phi Psi that night, Seccuro had been assaulted not by one man, but by three.

Let us not discuss Stacy either. Rolling Stone hasn't bothered to clarify whether her story is full of discrepancies as well, whether she too cannot be trusted, but it would be irresponsible to conclude otherwise, wouldn't it?

Rolling Stone has discovered that this past spring a UVA first-year student, whom we'll call Stacy, filed a report stating that while vomiting up too much whiskey into a male friend's toilet one night, he groped her, plunged his hands down her sweatpants and then, after carrying her semi-conscious to his bed, digitally penetrated her. [...]

The [Sexual Misconduct] board pronounced the man guilty for sexual misconduct against Stacy, making him only the 14th guilty person in UVA's history.

But what if Jackie wasn't lying? It's unfashionable to ask that question -- it's naive, and shrill, and social-justice-warrior-manhating-feminazi, and it's hanging onto a lost cause. But Jackie's friends did pick her up in the middle of the night. Jackie's friends did think something terrible had happened to her. Jackie's friends did offer to get her medical treatment, right then! The "discrepancies" unearthed by the Post were that she was picked up a mile from the frat house instead of right in front of it, that her friends say in fact they weren't amoral sludgemonsters who refused to get her help, and that at the time she she said she'd been assaulted by only five men, instead of the later claimed seven.

The frat didn't have a party that night? Sure, maybe not one with a theme and engraved invitations, but show us a fraternity house where there aren't 50 people drinking every night of the year, and we will send it to Neil deGrasse Tyson as proof of alternate universes.

And Jackie's date, the one the Post had first "determined" had never met her, before quietly changing its sourcing to "he said" he'd never met her. He wasn't in Phi Kappa Psi. He was in a different fraternity. Therefore, it all never happened, because Jackie got the fraternity wrong.

Yes, it's unfashionable to still believe Jackie. The Internet has spoken -- at least a corner of the Internet that's very invested in proving rape does not actually exist in America, except when passed-out girls are raping nice, wholesome boys -- and the Washington Post has proved the whole thing, all of it, was a lie.

So don't believe Jackie. And don't believe any woman or girl who says the same thing happened to her. Don't believe the Department of Education. Just go back to 4Chan, or your job at the Post, and be content in the knowledge that you helped save America from an army of Jackies laying waste to the good young men of our nation, because they got the details wrong. And now that we have "proof" that Jackie is lying that proves nothing of the sort, it is our collective duty to investigate just how much she is lying, and which details are the most untrue, so we can reassure ourselves that we needn't be horrified after all.

Let's just talk about Jackie, and whether her story is true -- which it simply cannot be -- because if it isn't, we can forget everything else.